Ok, so first off I should probably mention that it’s taken me about three days to write this review. It’s not that it’s a terribly complex movie, or that I’ve wanted to go on and on and on about it. It’s just that for about two days, I’ve been sitting with this post open on its own tab, and I’ve been finding any and every online reason to distract myself from writing it. I do have to admit that it’s been very refreshing to essentially take a break from blogging. I went from being quite disappointed that my traffic wasn’t increasing at the same rate it had been for a handful of months, and that it was way lower than several other sites that had started around the same time, and that posting daily was way more taxing than I realized and after a few days, I realized it wasn’t having a huge effect on traffic. I’m obviously getting less traffic than I was when I was posting daily, but it’s not a huge drop. And if I really cared that much about traffic, I would simply review more popular movies. But taking this break has helped me focus on what this site has really become for me, a way to seek out and share my thoughts on a little niche genre that I enjoy, a way to find the undiscovered little gems that others may get a kick out of. But before I go way off topic (too late), let’s get back to the movie at hand. Before I started looking into it, all I knew about Barb Wire was that it was Pamela Anderson’s attempt at acting, an adaptation of some comic book, and Pam Anderson showed off quite a bit of her body in it. After I started looking into it, one of the first things anyone mentioned about it was that it was essentially a remake of Casablanca. Now Casablanca is one of the few black and white classic movies that I’m a big fan of. I’ve seen it three or four times (which is a lot for me, I rarely re-watch movies unless it’s a favorite), so I was curious how many similarities I would be able to catch, which did kind of make it more interesting to watch, if only a little.

But before I get to the Casablanca connections, I should mention that I watched the unrated edition. And honestly, I think I would have rather watched the theatrical cut. I’m not sure what all the differences are, but I’m pretty sure the extended striptease at the beginning was added, and it was also something I could do without. Now don’t get me wrong, Pamela Anderson at that time was an attractive woman, but whoever filmed that scene created the most boring striptease sequence I have ever seen in my life. It felt like at least five minutes of Pamela Anderson gyrating in a rubber dress while being sprayed by water. Occasionally, her breasts would pop out of her dress. The shots were random and jarring, cutting several different angles and stages of undress. One moment her dress was mostly zipped up, one moment it was zipped down, there were even a couple brief cuts where she was completely naked, though still covering herself up. It was dimly lit, and a bad cover of Word Up played in the background. After about the first minute, I was ready for it to be over, and yet it wasn’t even halfway done yet. Throughout the rest of the movie, there were a couple other brief moments of nudity, but they were mostly kept brief and in the background. If nudity is a selling point of a movie, which in this case I believe it was, then it should be handled better than showing it and trying to hide it at the same time. 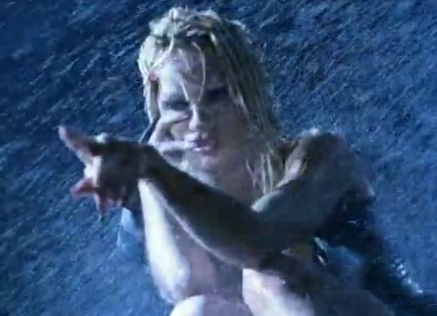 How could anyone manage to screw up Pamela Anderson in a revealing dress being sprayed with water?!

Aside from the nudity, the movie is set in a dystopian future society during the second Civil War, and Canada is the nation of choice for those who want to get away from it all. Pamela Anderson’s character, Barb Wire, owns a bar that for some reason can’t make ends meet. I would have thought a bar would be one place that would thrive under those conditions, unless Barb is just a horrible manager. I could be wrong, but I thought Rick was doing pretty well for himself with his Cafe American. So besides being a bar manager, she’s also a bounty hunter on the side, using her feminine assets to pose as a stripper and a prostitute to get close to her bounties. I thought way too much time was spent on the two “undercover” portions of the job rather than the more action filled bounty hunting portions. The action itself was done fairly well, although any time Barb says a line, it’s either a cheesy one-liner, or “Don’t call me babe!” followed by a kill shot.

Once the bounty hunting segments are out of the way, the movie is able to get back to the heart of Casablanca’s story, following the gender-reversed figure-important-to-the-revolution and her bodyguard/Barb’s ex-love interest and their quest for the “letters of transit” in the form of retinal scan fooling contact lenses. It was hard to tell if the connections to Casablanca were supposed to be an homage or a parody. Most of the action movie plot took the love story and fugitive status seriously, and yet they turned Sydney Greenstreet’s character into a black man so fat that he’s carried around in the bucket of a bulldozer and goes by the name “big fatso”. They also neglect to feature one of Casablanca’s most famous and moving scenes where the Nazis and the locals have a singing battle with their national anthems. On a random sidenote, I just had a vision that if the movie were remade today that scene would end up being a Glee style mashup. And at the end of the movie, the last line becomes much more of a joke.

I have no words.

I actually did enjoy myself quite a bit while watching this movie. I obviously didn’t enjoy myself because it was a good movie, I didn’t enjoy it because of the nudity, and I sure as hell didn’t enjoy it for the plot. It was bad, but it was just over the top enough to be hilarious more often than not. And when I wasn’t laughing at the badly delivered, cheesy one-liners, I was laughing at the pointless bits of randomness, like when the bald waiter tossed off his wig that he put on only moments before for no apparent reason. It was awful, but it was occasionally awfully good fun, just don’t call me babe. Until next time, this has been Bubbawheat for Flights, Tights, and Movie Nights.