It’s been a while since I’ve done one of these superhero podcast reviews. I had run out of all the ones I regularly listened to, hadn’t had any podcasts contacting me for reviews, and didn’t have much luck when I was randomly searching for new ones. But then Jay Cluitt from Life vs Film clued me in on an upcoming podcast, and now that they just finished their first season, I thought it was high time I gave them some love on my site. And, if you do run your own superhero podcast, or know of one that you would like to see me review here, just leave a comment or e-mail me at Bubbawheat@msn.com and I’ll check it out and give it my ultimate verdict of: Subscribed, Unsubscribed, or Selected Episodes. 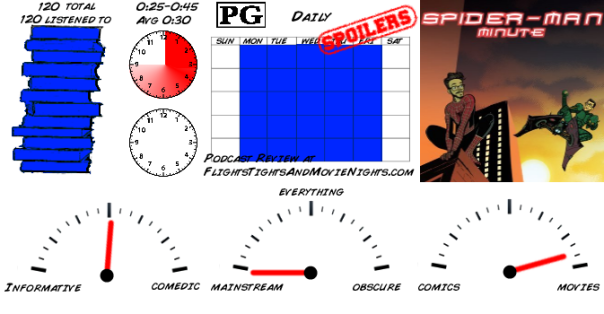 The two hosts Zach Luna and Scott Carelli take an in depth look at a single minute of the 2002 Spider-Man movie, except for the minutes that include only credits, they have one or multiple guests. Zach is a huge Spider-Man fan who also works in the film industry in the costume department and has his own high quality Spider-Man suit where he will frequently use to attend cons, visit children’s hospitals, and various other things. They both work well together and have a strong rapport that keeps the conversation flowing. They also work well with the many different guests where it feels like they are all long time friends, whether that’s true or not. Since it is breaking the film down minute-by-minute, there are many moments of over-analyzing small details, but they do it in a very fun and entertaining way. They also have done their research and include many different tidbits from behind the scenes, most notably the differences between what ended up in the film versus what the first full script by David Koepp was like and even smaller differences from the shooting script.

Since this is all about the 2002 Spider-Man movie, the discussion is almost entirely about the 2002 Spider-Man movie. There are occasional references to the comics, as every guest is asked at one point what their first introduction to Spider-Man as a character was, and that often brings up various different comic book runs. There’s also some conversations about how the characters as portrayed in the film are different from various versions of their comic book counterparts. But it always comes back around to what’s specifically in the movie at hand.

I think it’s pretty obvious where my final verdict is going to stand considering that I have listened to all 120 episodes and they have only ended their run of the first film just last week. It helps that I’m a fan of the movie and as this was my first exposure to a minute-by-minute style podcast I have to say that I am a fan. I’m not sure if I’m ready to jump straight into another podcast in this style right away, as it is quite a commitment unless I find one with shorter episodes and/or a less frequent release schedule. But it has always been an enjoyable experience. I learned a lot about this film specifically, as well as some in depth knowledge about movie costuming. I will be looking forward to hearing them discuss Spider-Man 2 and beyond when they return next year.