← Guardians
BlokeBusting The Essentials #100: The Wild Wild World Of Batwoman →

It feels like it’s going to take forever for me to catch up with the previous year and a half of superhero movies that I missed out on, but I’m continuing to inch my way through them. I had vaguely heard about this movie before going on hiatus but didn’t know anything besides the fact that it was an action movie based on a comic book before going into it, which is honestly always a treat. What I found was a stunt-oriented revenge movie involving hitmen that reminded me a lot of the movie Payback which I really love. The plot is honestly a relatively standard guy working his way up the chain of command with a bit of dark humor laced throughout since there’s plenty of killing going on. Not only that, but the director was Jesse V Johnson who directed a great action oriented Wonder Woman concept trailer way back in 2013.

The title of the film comes from the fact that the protagonist of the film Mike Fallon is a hitman who excels at making his hits look like an accident. The film opens with him somehow tricking someone to get roped into a noose so that he could be forcibly hanged. He then goes to a bar, pays off the bouncer and just goes to town on the drunken patrons just to blow off a little steam. Mike is also part of a group of hitmen who hang out at a pub run by their mentor slash retired hitman Big Ray. The inciting event happens when Mike’s ex-girlfriend is killed, but it ends up being a hit from his own company that reveals some shady double-dealings so he has to work his way through the layers of separation that normally keep the hitman operation running smoothly as he finds out who put the hit out on his girl.

Where this movie really shines are the fight scenes. The majority of the actors are actor slash stunt actors. Scott Adkins who plays the lead Mike is probably best known by someone reading this site as the stunt actor for the terrible version of Deadpool in X-Men Origins: Wolverine. He’s also joined by Ray Park aka Darth Maul and Toad from the first X-Men, Michael Jai White aka Spawn, and Amy Johnston who hasn’t had a notable role yet but has done stunts for tons of movies. And with all of these stunt actors, the fight scenes are the best parts of the movie. Scott Adkins pulls the moves off and makes it look effortless, though by the end of the movie, I felt like he was leaning on his spinning jump kick in the same way that Jean Claude Van Damme would lean on his jumping splits. 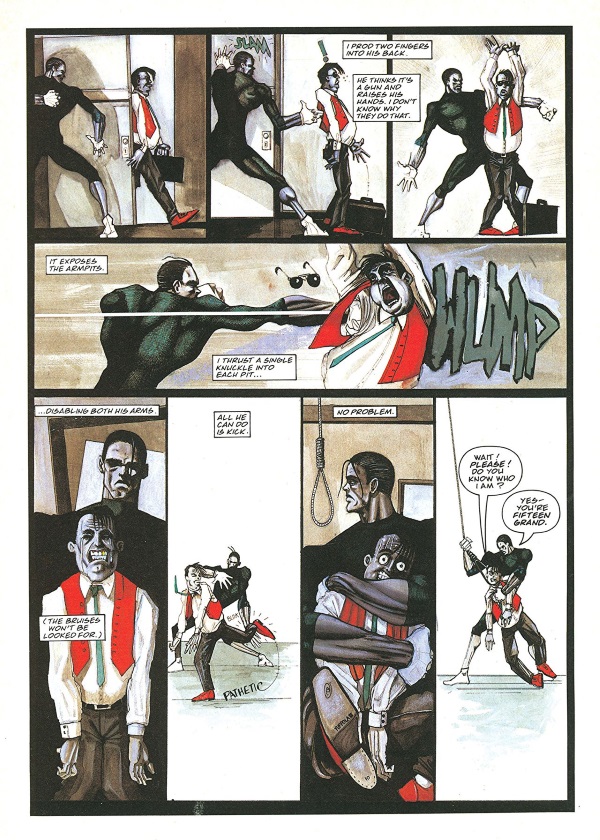 The overarching plot works well enough as Mike works his way through the inner workings of his own hitman operation, able to discern the truth of the initial murder via his experience and knowledge of his fellow hitmen who each have their own unique methods of killing. It’s actually a nice little visual flair as Mike visualizes both the framed killers as well as the actual killers. It also helps to get behind the protagonist as an audience when they do a flashback scene to show how Mike became a hitman in the first place as a bullied teen who wanted to get back at his tormentors. He just went a little bit past revenge and into full blown emotionless killer. It also helps that his mentor Big Ray was played by Ray Stevenson who also played the Punisher at one point. There’s also a touch of giving Mike some morals as we found out that his ex-girlfriend was carrying his unborn baby. He doesn’t exactly give up his killing ways by the end of the film, but there’s a slight hint of morality that didn’t exist when the film started to give him a slight edge as an anti-hero at the very least.

The overall look of the film is relatively basic, even though it’s inspired by a comic book, there aren’t the extraneous comic book touches. Even though it does have a similar set up where Mike introduces each of the individual hitmen with a cutscene backstory, there aren’t any extreme flourishes similar to Suicide Squad. Instead, it’s a much more pared back and straightforward moment. One odd touch that may have been an unintentional artifact based on the method of filming was that there were several odd moments of blue light flares. It does look a lot more polished than other low budget vigilante films, as there are plenty of those in the superhero genre. All in all, it was a really fun ride. It shared a lot of similarities to Payback with the likable villain, Mike working his way up the ladder of this planned hit, different teams of characters working against Mike in the background, and they even share an actor in David Paymer. It’s dark, it’s violent, the action is great, but it still manages to not make things too serious. Accident Man was quite a bit of fun. Until next time, this has been Bubbawheat for Flights, Tights, and Movie Nights.

← Guardians
BlokeBusting The Essentials #100: The Wild Wild World Of Batwoman →