While I’m a bit late in writing this as I did actually watch it on opening weekend and even recorded a Lambcast on the movie, and even though I wrote most of this first paragraph back when I saw it the first time, it took me quite a while to revisit it as I am catching up on the films I missed reviewing over the course of 2018. The movie bills itself (or at least many others have billed it this way) as a movie ten years in the making since the introduction of the MCU proper with the first Iron Man movie. This brings together nearly all of the heroes that we’ve seen in the previous movies to come together to fight their greatest foe yet with the power to destroy the universe with the snap of a finger. It’s difficult to fault this movie much as it follows a similar arc as the first Avengers movie only on a much larger scale. There’s higher stakes, more characters, more action and death, but it balances them all just as well as the first team-up movie and much better than the second. And while most anyone interested in seeing the movie at all has already seen it, there will be spoilers from here on out. 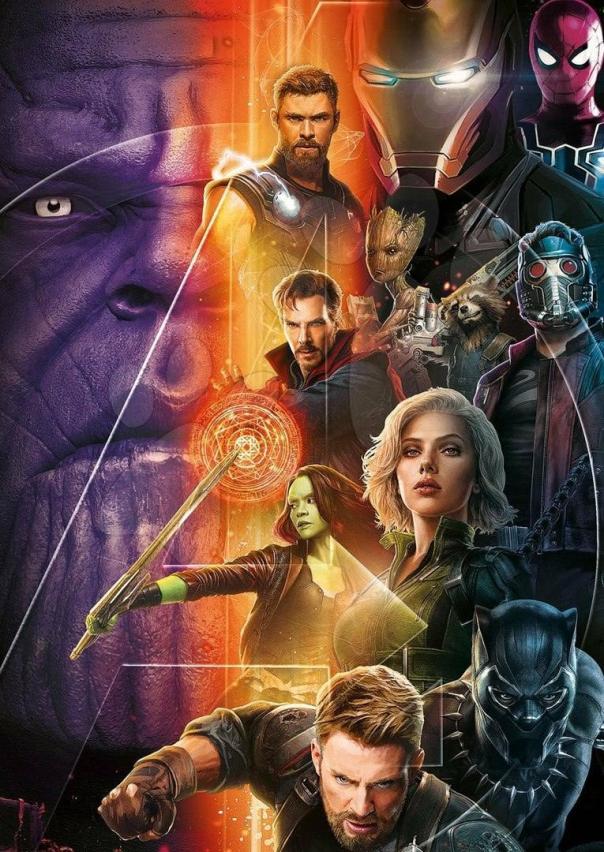 One of the most talked about moments of this movie is what happens at the end with the snap heard ’round the multiverse. It’s a difficult thing because for many people who are familiar with comic books in general as well as the fact that many of the heroes who faded away into dust will definitely be appearing in later movies which means that they aren’t gone forever. But that doesn’t entirely diminish the pathos as seen by the reactions of the characters around them. It’s similar to watching Empire Strikes Back or any number of movies or television shows that have cliffhanger endings that are resolved in a sequel or the next episode. It’s like having a built in spoiler. And although the fates of characters like Black Panther and Peter Parker are already known, there’s still the question of how it will be resolved and how it will affect the characters in the meantime. Watching it the second time around still doesn’t diminish the reaction that Peter has as he feels himself fade away into nothingness.

Where the rest of the film really works is taking the characters that we know from the previous MCU movies and mixing and matching them in different ways. There are still some familiar combos like pairing Spider-Man with Iron Man, Vision and Scarlet Witch, and Black Widow with Captain America. But there are also quite a few more entertaining match-ups like Tony Stark and Doctor Strange, Thor with Rocket and Groot, and Black Widow with Okoye. Not only that, but the way the characters are introduced to each other or to the movie are often smile-inducing. Like the immediately recognizable Guardians of the Galaxy music drop with the title card that simply says “Space”, or the appearance of Captain America in shadow behind the passing train, and when he refers to Black Panther as “I know a guy”. It’s just a joyful moment to be immersed in this expansive world of movies and characters that are easily recognizable by something so simple, and it’s pulled off expertly.

Another big challenge for this movie before it came out was the specter of Thanos that has been alluded to ever since the first Avengers movie. He’s been a shadowy presence that has undergone subtle changes over the course of the past six years but he was finally given the gravitas and power that represents a universe-level threat. Not only that, but he’s also not just a generic capital E evil villain who wants to destroy/rule the universe just because it’s evil and he’s evil so that’s what he’s doing. Instead they give him a motivation that clearly makes sense to him where he is the hero of his own story. He’s trying to save the world in his own misguided way because he’s convinced himself that it’s the right path to take, and it’s a path that has worked for him in the past as he recounts the aftermath of Gamora’s homeworld. There’s also a stronger connection between him and Gamora that could feel a little rushed, but is given just enough time to resonate in between all of the action beats. The only real complaint is that for how he presents himself through most of the movie, there are a few moments when he uses the reality gem to make weapons into harmless bubble blowing guns that feel overly whimsical compared to how Thanos presents himself in every other way.

There are plenty of characters and while a few of them get the short shrift, most notably Vision, for the most part they are all given something interesting to do and all feel like they are an essential part of the story and it’s not difficult to keep track of who is with who and what’s going on where. The villains outside of Thanos are also a little underdeveloped as most of them aren’t even called by their names and are just relatively fearsome presences. The only one who gets much personality is the mage Maw who fights Doctor Strange, Iron Man, Wong, and Spider-Man. It’s a bit of a shame that Vision doesn’t get to do much as he’s often considered to be one of the most powerful Avengers, but he gets taken out of the fight almost immediately and essentially turns into a macguffin as he has the mind stone that Thanos wants and the rest of them want to destroy. Instead, he’s given a more down to Earth arc with his near-fully blossomed relationship with Scarlet Witch.

One of the central themes to Infinity War, which is often a theme with superheroes in general is that of sacrifice. Loki sacrifices himself to save Thor during the beginning of the film, as Heimdall does for Hulk. And while there are plenty of heroes who sacrifice themselves to save others including Doctor Strange, Gamora, and especially Vision what really sells the theme is how it’s used by Thanos. Instead of sacrificing himself to save the lives of others, he’s more interested in sacrificing the lives of others to meet his own ends, both as he wants to sacrifice half of the universe to enrich the other half and the more literal sacrifice as he kills the one person he supposedly loves in order to gain the Soul Stone. And I haven’t even gotten around to talking about how some of the characters are portrayed or how entertaining all of the action scenes are. It’s a dense film packed with characters, action, and moments of drama and tension. It’s not an entirely perfect film as there are occasional nitpicks here and there like the absence of Hulk, but the nitpicks are forgettable and the rest of the film is a great ride from start to finish. It’s an incredible lead up to quite possibly the end of this chapter of the MCU, I just hope that the Endgame continues this quality and doesn’t dip into another Age of Ultron as it has a lot to live up to. Until next time, this has been Bubbawheat for Flights, Tights, and Movie Nights.