← 33 of the Worst Superhero Movies Ever Made
Superhero Shorts: Batman Dead End → 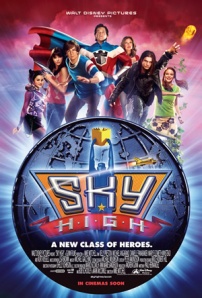 I had seen both Sky High and Zoom several years ago and in my memory I had enjoyed Zoom a little bit better. When I watched Zoom again, it still made me laugh just as much as it did the first time, but when I wrote about it I realized a lot of flaws with the plot and the characters. I felt almost the exact opposite about Sky High, it had a much stronger plot and characters, but it just didn’t make me laugh nearly as often. It drew a lot of smiles and a couple chuckles, but no flat out laughter. Jena enjoyed it somewhat, but it couldn’t hold her attention for the entirety of the movie so she tuned out about an hour in. But even without any full fledged laughs out of me, Sky High is a pretty impressive movie for what it is.

Sky High follows the Freshman journey of one Will Stronghold played by Michael Angarano who is the son of The Commander played by Kurt Russell who is super strong and his wife Jetstream played by Kelly Preston who can fly. He starts out going to Sky High, which is a high school for superpowered children and divides the kids into hero classes and sidekick classes. Initially he doesn’t inherit any of his parents’ powers so he gets placed into the sidekick classes and makes friends with all the other social outcasts, but soon enough gains his father’s super strength and gets promoted to the hero classes and the social status that comes with it. There’s a lot of typical high school drama in this movie, the bully that becomes a friend, the best friend that has a crush on Will who is too busy making goo goo eyes at the most popular girl in school who is just using him, but all with a superpowered twist to them. I especially thought that the overall villainous plot was pretty impressive and actually made sense. The villain Royal Pain wants to use the pacifier gun to turn all of the powerful heroes into babies in order to raise them all into an army of supervillains.

The cast of adults are all very well known actors and do an amazing job. I loved every one of them and enjoyed recognizing them all even lesser known comic actors like Tom Kenny and Jill Talley who I knew from Mr. Show, but it was also great to see Bruce Campbell as the gym teacher, Cloris Leachman as the nurse with X-ray vision, and Kids in the Hall alums Dave Foley and Kevin McDonald as other teachers. It was also a nice touch to see Wonder Woman’s Linda Carter as the principal. I wasn’t familiar with the actor but I also loved the character of Ron Wilson, Bus Driver. They all took their characters seriously and played them for all they were worth without overemphasizing the silliness of their roles.

But what should be the heart of the movie is the actual kid superheroes, and while most of them fell into standard archetypes, they were all given distinct personalities and were all given a moment to shine. One thing that was nice about a lot of the kids were the fact that their typical high school roles were often stood on their head when their superpowers actually came into play. Like one minor character Larry, he was the typical nerdy guy with poofy red hair, glasses, pocket protector, the whole works, yet his superpower was the ability to transform into a giant rock monster which gave him a ton of cool points within the school’s social society. And one of the sidekicks, Zack, was a tall cool looking guy with a lot of attitude and charisma, and yet when his only superpower is to glow, then he gets knocked down to the bottom of the social ladder along with the rest of the sidekicks. I also liked the two bullies who totally reminded me of Bulk and Skull from the old Power Rangers show, but they weren’t nearly as stupid. I also liked the fact that the overweight one had superspeed which is another power that goes against initial expectations.

Lash didn't speak much so he could have been the stupid one.

Of course, no high school movie can exist without having some sort of love story, and this one is no different. It follows the standard story of the two kids who have been best friends since first grade, and Layla has developed the hots for Will but he has absolutely no idea about it. He starts dating the most popular girl in school, ditching his best friend in the process, and she starts dating the resident bad boy Warren Peace just to make Will jealous. In the end of course they get together and things are copacetic. While the general arc of the relationship was pretty predictable, I thought Layla put in a pretty good performance, and I also enjoyed Warren Peace as both the brooding enemy of Will and also as a reluctantly sympathetic friend to Layla, helping her partly because he’s actually a good guy and partly because it will get at Will. As a side note, I recently saw the actress who played Layla on the most recent episode of Grimm, and I must say she has grown up.

She went from superpowered hippie chick to supernatural dragon goddess.

There were a few weak points in the movie, and I think the biggest one is how cliche the entire high school drama part of the plot was, from the backstabbing popular girl to the regular guy bumped up to popular status and then becomes a jerk to his old socially outsider friends, to the fact that he’s completely blind to the fact that his best friend is head over heels in love with him, it’s all old hat. Adding superpowers into the mix doesn’t completely alleviate those plotlines even though the heroic plotline was pretty clever and unique, although the action was fairly downplayed. But the lack of action is a minor offense in a comedy like this, at least it wasn’t horribly cheesy, it just wasn’t spectacular. I’d definitely recommend this movie if you’re a fan of more subtle humor. Until next time, this has been Bubbawheat for Flights, Tights, and Movie Nights.

← 33 of the Worst Superhero Movies Ever Made
Superhero Shorts: Batman Dead End →