← Will the Avengers be an origin movie?
Superhero Shorts: Batman’s Night Out →

One thing that I’ve realized recently and yet still haven’t gotten in the habit of doing is to make this first paragraph of the film review an interesting little caption on what is to come in the rest of the review. It’s the first thing someone reads when they’re looking at the post from another page and yet just like I’m doing right now, I use this precious space talking about some random topic. But at least for the regular readers, I hope that’s just an interesting quirk that adds to my personality. Yesterday evening I looked up the movie to finish out this loosely themed collection of superheroes with guns and/or classic pulp heroes that started with The Punisher movies, and ends with The Shadow. I don’t remember when I first saw The Shadow, it has been many years since I’ve seen it but I remembered enjoying it. Watching it again now I notice a lot more little things that are an interesting little spin on the traditional superhero, it has a lot of noir charm, and an impressive cast of actors. The Shadow still holds up quite well in my eyes.

The Shadow is based on an old radio show turned pulp comic from the 30’s. This movie picks and chooses from the different incarnations of the character to create the character of Lamont Cranston. He was originally an opium warlord in some Asian country that is either not mentioned or I just forgot, until he is captured and taught by a young looking master in the ways to cloud men’s minds. The movie vaguely explains it as a combination of telekinesis and hypnotism which allows him to change his appearance in someone else’s eyes, even to become invisible except for his shadow, and he can control the weak minded with essentially a Jedi mind trick. Seven years later, he has set up shop in New York City in the 30’s and has amassed a group of followers and informants that he has saved from various gangsters. The one thing that struck me as pretty impressive is how he hides his secret identity. While most other superheroes only use a mask, he uses just a scarf. And yet his identity is much better protected because he also changes the features of his face to make him look like a completely different person. I thought this was a pretty impressive technique for its time, especially compared to a disguise like Superman’s which is just a pair of glasses.

Sure as hell a lot better than a pair of glasses.

The villain was also very interesting to me. He’s Shiwan Khan, the last descendant of Genghis Khan, and has also studied not only the same techniques as The Shadow, but also his past when he was a warlord. I liked Shiwan for various reasons, I thought the dichotomy between his barbarian heritage and his civilized education was something different and unique. He spent time in his ancestor’s burial chamber to absorb his energy, his minions are all dressed like Mongol warriors, and yet he later is seen wearing a suit and tie. I also found it interesting how he interacts with Lamont, they have several seemingly casual conversations where Shiwan constantly tries to recruit Lamont. He tries to remind Lamont of his past with an almost admirable resolve usually reserved for characters like Luke Skywalker reminding Anakin of his past and I don’t know why I keep going with the Star Wars references today. He is intelligent, resourceful, and charming. While at the same time arrogant, power hungry, and remorseless. An odd combination, and yet I thought it was pulled off admirably.

One of the other things that I had forgotten about since the last time I watched this movie was the cast list. Jonathon Winters plays the clueless police commissioner and Uncle to Lamont, showing up several times for a dinner meeting with his Nephew, complaining about his lateness and being mind tricked into ignoring reports of the Shadow. There’s also Tim Curry playing the one American working for Shiwan of his own free will, he was a fun addition with a couple nice scenes. And I almost didn’t recognize Ian McKellen as the father of Margot Lane and absentminded scientist, he was unfortunately forgettable with not much to do in this movie aside from a color blindness joke. Peter Boyle was also great to see in the role of The Shadow’s taxi driver with a few fun scenes. 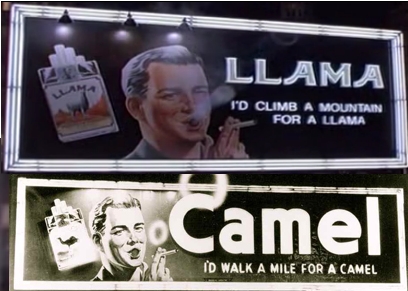 This billboard just tickled me every time is came up on screen. And had to throw in the original inspiration for comparison.

I also didn’t remember how much humor was in the movie, or at least lightheartedness. I’m not sure if I ever laughed out loud, but I spent a lot of the movie with a smile on my face. From visual gags like the giant Llama cigarette billboard blowing smoke rings to the bomb rolling around the hotel in the final climactic scene like something between Scooby Doo and Raiders of the Lost Ark. I also thought Margo Lane was a great character, especially the scene where she comes into her telepathic link with Lamont and answers his questions before he finishes asking them. I also especially liked another break from comic book convention where she finds herself in Lamont’s room while she was under mind control. She snaps out of it and reasons out that Lamont is The Shadow’s secret identity. If it were any other comic book character, she would have cluelessly never been able to put two and two together. This might be a breaking point for a lot of people who dislike this movie, but for me personally it fit my sense of humor almost perfectly and I enjoyed every bit of it.

The other thing I have to mention about this movie is the look of it. The special effects may be dated, but they don’t feel dated to me. I think they fit the style of the movie and don’t draw too much attention to themselves. I think the fight scenes where The Shadow pops out of invisiblity to land his punches look great, as do some of the animation scenes. The dream sequence where Lamont rips off his face is incredible. I also loved the look of the old New York matte paintings. My personal favorite things in this movie was the dagger with the face on it, and the final fight scene with the shattering hall of mirrors. I think the only weak point for me personally were the few times where he slowly stepped out of his shadow. If I had to put a weak point to this movie, it would have to be the plot. The motivations and macguffins were rather weak for the most part, but the style of the characters and the movie itself just drew me in and I really didn’t care. I loved the movie and definitely have a new appreciation for it. And now I begin my anticipation to see The Avengers and hate the fact that I follow so many UK blogs that get to see the movie much earlier than me. I haven’t fully decided on the order which I see the lead up movies, but I know I’m starting with Ang Lee’s Hulk on Sunday. Until next time, this has been Bubbawheat for Flights, Tights, and Movie Nights.

← Will the Avengers be an origin movie?
Superhero Shorts: Batman’s Night Out →