My last edition of Almost Super went over quite well, so I just had to follow it up with the sequel. I’m not sure how regular these will be, probably just whenever I’m in the mood for one. But anyway, where the original Gremlins was somewhere in between being a horror and a comedy, Gremlins 2 is a flat out comedy with only a hint of horror left in it. And things are amped up in every way with more Gremlins, and even plenty of super Gremlins that get into several different batches of genetic potions. This was the real reason why I reviewed the original Gremlins in the first place, but I definitely wasn’t wrong to watch the first one again as there are plenty of callbacks that I might not have recognized.

This movie really breaks a lot of movie conventions. From the very start, it features Bugs and Daffy for no discernible reason. They’re funny but I didn’t understand why they were there, especially because they seem awfully far removed from the horror-derived Gremlins. Then of course there’s the scene in the middle of the movie that I had completely forgotten about where the film sputters and burns up, revealing that the Gremlins have invaded the projector room and are now showing some black and white sun worshippers movie featuring a bunch of nude women, albeit always tastefully blocked. And it takes Hulk Hogan to put them in line and show the rest of the movie, complete with the famous shirt rip. There’s also a scene where they rip apart the original “don’t feed them after midnight” rule asking questions that any intelligent viewer of the first movie would have probably asked, as well as unknowingly offering up a possible sequel idea for Gremlins on a Plane. And near the end of the movie, the Gremlins start to put on a full blown musical number. It’s absurdist humor at its finest. 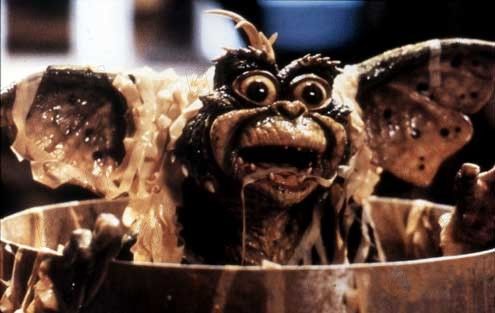 Are you going to eat that?

There are so many great callbacks to the first movie, and they’re all pretty funny. I especially loved the bit where Kate starts talking about her traumatic childhood memory about Lincoln’s Birthday that echoed her Christmas trauma from the first movie. There’s also a scene where film critic Leonard Maltin is being shown on an episode of TV where he is criticizing the original Gremlins movie before being attacked by the new Gremlins. The first batch of Gremlins also have a leader with a prominent stripe of hair on his head, though in this movie he’s referred to as Mohawk rather than Stripe. There were also a couple other minor things that I noticed. In both movies, there’s a Burger King restaurant featured in the background. Also, the gas station attendant from the first movie appears again as some random building employee. And while this isn’t a direct connection, I thought it was interesting that pretty much the entire Clamp building has tons of gadgets that behave as if they were created by Billy’s inventor father, malfunctioning in interesting ways.

The sequel really ramps up a lot of things from the original movie. The special effects are all quite a bit better, with less stop motion and more blue screen puppetry which I thought looked a lot smoother than the stop motion of the first movie. There was also much more distinct personalities with the Gremlins. In the first movie, there was pretty much just Stripe and the rest. This movie has the leader Mohawk, the tough guy, the stupid one, and the completely insane one. My wife and I absolutely loved the insane one by the way. Not only that, but there’s a genetics lab in the building that the Gremlins get into creating even more distinct characters, such as the lady Gremlin, the brainy Gremlin, and the bat Gremlin. The only one I didn’t really think was interesting was the vegetable Gremlin. He was visually different from the rest, but there wasn’t really anything different about his personality, he just looked different. 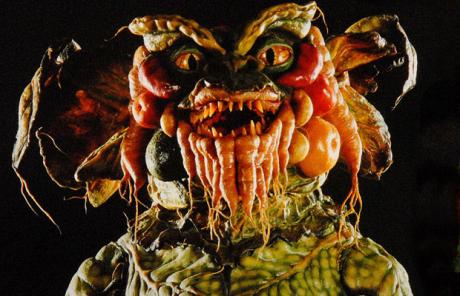 And you know what? He doesn’t really look all that awesome either.

The one thing that seemed surprisingly played down was Gizmo’s role in the whole movie. Through most of the beginning, he was either trapped or hidden. In fact, there’s really only one scene where he has time to shine, the Rambo scene. Outside of that, he’s sitting backseat to the other Gremlins. The horror elements were also toned down quite a bit, there’s one scene towards the beginning with a Gremlin death, but it’s not quite as gruesome as the kitchen scene in the first one. There’s a couple attacks that seem fairly vicious near the start, and there’s the scene with the two women trapped in the giant spider web, and that’s really it. Everywhere else, even though the people are screaming in terror, the Gremlins are merely making mischief rather than creating any actual terror.

As I said before, this movie was the real reason why I wanted to feature these two as my first Almost Super article. On top of all the altered Gremlins with extra abilities, there’s one scene that really sealed it for me. Near the end, Billy is giving the other people helping him directions on what they should do to get rid of the Gremlins, and when he gets to his chain smoking boss he says a line that immediately reminded me of the Avengers, but instead of Captain America saying “Hulk, smash.” Billy says “Marla, smoke.” My other favorite scene of the movie is when Kate is trapped in the Gremlin infested elevator and she asks the elevator to sound the emergency alarm, and instead, the Gremlins do their best imitation of an alarm. I seriously haven’t had anywhere near as much fun watching a movie for a very long time. There’s definitely an occasional “so ridiculous it’s funny” moment, but I enjoyed every minute of it. It’s been a while since I’ve laughed that much at a movie. Not sure what I’ll be watching next couple weeks, so if you have any suggestions feel free to send them my way. Until next time, this has been Bubbawheat for Flights, Tights, and Movie Nights.