I was originally going to start reviewing the Spider-Man movies today, but I decided that I wanted to give myself a couple extra days of leeway to watch the new flick, and since I’ve watched the animated movies for Green Lantern, Superman, and Batman, I thought it was only fair to add the only other DC solo hero to get their own animated movie: Wonder Woman. It was especially a no-brainer because I already own the DVD. As a quick side-note, I should make a list of all the superhero movies I actually own and haven’t reviewed yet at some point, but that’s another day. Wonder Woman is an Amazonian princess with ties to Greek mythology similar to Thor’s connection to Norse mythology, although Wonder Woman is more of an original creation that’s rooted in Greek mythology where Thor is a repurposing of Norse mythology. For my part, I enjoyed it enough to buy it on DVD at some point, though rewatching it now I don’t think it’s as strong as some of the other DC animation. It’s still quite good, but it could easily be better.

This film reminds me of a fan-trailer that animates over footage of Nathan Fillion to make him into a live-action Green Lantern. Here, Fillion plays Steve Trevor who is more or less the same as Hal Jordan, though instead of being given a Green Lantern ring, he becomes a sidekick to an Amazon princess. Based on his performance in this movie, I think he would have made a pretty great Green Lantern, but again I digress. As Steve Trevor, he’s a whole lot of fun, and the source of most of the comic relief. I enjoyed him a lot along with all of his one-liners, but he could also hold his own in a fight, kinda. He’s obviously no match for any of the creatures or demigods, but he does have a couple tricks up his sleeve.

Wonder Woman in this movie is played by Keri Russell, or as my generation knows her, Felicity. I thought she played the part quite well, though I wasn’t completely won over by the design. I thought the hair looked rather odd the way it was shaped around her head, making her head look quite large. There’s also all the Wonder Woman accouterments that I’m aware of: The boomerang tiara, the bullet deflecting bracers, the invisible jet, and of course the Lasso of Truth. Of which, only the bracers are given much explanation, the rest are just kind of there. I get the feeling that the jet should have been explained by a combination of Steve’s crashed plane and the mirror of Hephaestus which hides the island of Themyscira from view. It’s possible that it was, but if so, then I didn’t catch it on this viewing.

The main villain is Ares, God of War, although instead of being Zeus’s brother, he’s Zeus’s son for some reason. And his uncle is Hades whose design looks a lot more like Bacchus, which I actually thought was a unique and interesting decision rather than the typical idea of the lord of Hell. Anyway, Ares is played by Alfred Molina, best known in my circles as being Doc Ock in Spider-Man 2. Unfortunately, while I liked the idea of Ares, and the connection he had with Hippoletta, Wonder Woman’s mother, I didn’t much care for all the magic/science mumbo jumbo talk about him absorbing all the psychic energy of anger and hate, and especially the bit about how the simple act of firing a nuclear missile creates that psychic energy a thousandfold. It just didn’t make comic book sense to me, they could have come up with so many different ways to have him regain his godly power, but I thought that firing a nuclear missile was a pretty weak choice. Putting that bit aside, I did enjoy him for all his grandiose nature as well as his manipulations of those around him to accomplish his goals. 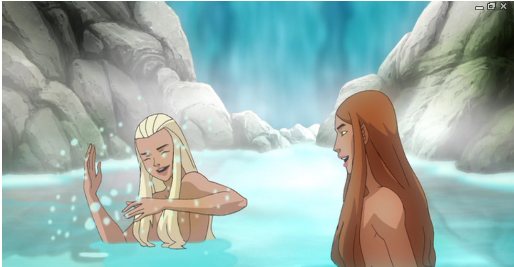 Of course, since Wonder Woman is one of the very few female superheroes, and the fact that she comes from an island where she spent over a century with nothing but other women, there has to be a feminist commentary spread throughout the movie. And I was fairly mixed on the way I thought it was handled throughout the movie. There were some extreme types of “damsel in distress” in the office place which I thought was a little over the top, and there was also the unnecessary yet admittedly enjoyable scene where Steve stumbles onto a waterfall and pool where there are dozens of naked Amazonians bathing in a playful way that only happens in men’s imaginations. But there was also some slight cases of role-reversal and sexism discussions between Diana and Steve which I actually quite enjoyed. Especially the bit at the end where Diana goes off to be Wonder Woman while Steve is left to head home and fix dinner. It may be fairly cliched, but it was handled with the right amount of humor that I enjoyed it.

As with all of the DC animated movies I’ve seen to this point, the animation was excellent, especially with all of the battle scenes between the Amazonians and the mythological armies of beasts and warriors. It was nice to see a superhero movie that had so much fantasy going on in it, since I’m a big sucker for fantasy. There were a few missteps here and there, like I never understood exactly why the final battle took place in Washington D.c. But I still enjoyed the movie, and so did Jena. For a short while it was one of her favorite movies, and she still remembered a lot of what was going to happen. Next to Wonder Woman, her favorite character was the bookish Amazonian. And that caps off my short run of animated movies for a while, I may have to miss another Superhero Shorts again this week, but hopefully I’ll get my answers back from an excellent little fan-film. Until next time, this has been Bubbawheat for Flights, Tights, and Movie Nights.