Or as it might more appropriately be called when compared to the recent movie, “The Dark Knight Falls”. Not because of the quality of the movie at all, but just because of what happens to Batman at the end of the movie, especially with where he starts the new movie. Ever since this movie came out in 2008, it has moved to the top of nearly everyone’s list of favorite superhero movies, and with good reason. The most memorable thing about the movie is definitely Heath Ledger’s performance as the Joker. He was able to create something different than we’ve ever seen before, something much darker, close to many of the comics, and yet still likable. But there’s more to the movie than just the Joker, the overall plot is extremely tight and engaging, and the level of realism is really bumped up from what we saw in Batman Begins. Not only all that, but even the relationships between the characters are all very strong, and the movie still manages to have a huge heart in it. It really is one of the best superhero movies of all time, if not the best. 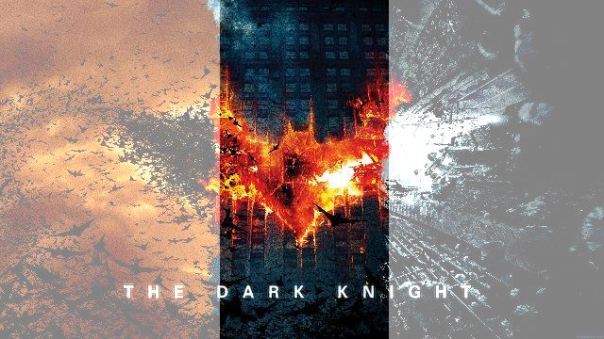 The first thing that anyone should talk about when discussing this movie is Heath Ledger’s turn as the Joker. It was initially a mixed reaction, as he was mostly known for being a teen heartthrob in 10 Things I Hate About You & First Knight, or a gay cowboy in Brokeback Mountain. This is really the movie that sealed him as a superstar actor, and it is well deserved. It’s almost impossible to see any part of Heath Ledger or his previous roles in the Joker, not only that, but you also aren’t able to see inspirations from Jack Nicholson or Mark Hamill. He was able to craft his own version of the Joker who is dark and twisted, yet also cold and calculating, completely insane, yet also extremely intelligent and meticulous, and always with a sick sense of humor. Any time he’s on screen, your eyes can’t help but be drawn to him.

The fact is, the Joker is by far Batman’s greatest foe and it was great to see him in full force in this movie. This isn’t the Joker with all the clownish gags and toxic drugs that leave people dead with a grotesque smile on their faces. This is a much more methodical and calculating Joker, he’s two steps ahead of Batman every step of the way. It’s a game of cat and mouse, and you’re never sure who is the cat and who is the mouse, and even though you may think you know who comes out on top in the end, it’s not really that clear if Batman really did fully win. The Joker comes up with all sorts of elaborate scenarios, and the most effective one is when he claims that all the bridges and tunnels out of Gotham are rigged, which only leave the ferries to get out of the city, which are the only things that are actually rigged. Each ferry has two detonators – one held by the Joker, and the other held by the opposite boat. One is filled with prisoners, and the other with regular citizens. If one ship blows, the other goes free, if neither one blows, Joker blows them both. It is a wonderfully tense and dramatic scene, and Tiny Lister as the scary looking inmate has a really powerful scene. The only thing that does kind of take away from the moment is that it is hard to believe that everyone in both ferries would overlook the fact that the hold is filled with explosives until they were halfway over the water.

Give it to me, and I’ll do what you should have done ten minutes ago.

As with Batman Begins, the cast is a stellar part of what makes this movie great, all of the main cast except for Liam Neeson return for this movie and they are all just as great. One of my few complaints about Batman Begins is much improved in this movie. I thought Bale’s Batman was fairly uninteresting in Begins, but he has much more to do in this movie, getting probably the most screen time in the suit than in the other two movies, and he really gets into the role much more. There were only two moments where I wasn’t completely sold on his decisions. I liked the scene where Joker was daring Batman to run into him with the Bat pod (or Batcycle as I tend to refer to it in my head), and Batman struggles with wanting to do it, but swerves at the last minute and crashes. I thought he should have been a little bit more in control of his surroundings and while he may have had an internal struggle at that moment, I think he should have been able to recover from it much more quickly. Also, during the final Joker showdown, I thought it should have been relatively easy for Batman to contact the police, or at the very least Gordon, to let them know that the clowns are the hostages, instead of taking out the swat team.

The action in this movie is a step above Batman Begins, and the intricacy of the plot is pretty flawless, with all of the back and forth games, planning, bait and switches, and double backs, never revealing the entire plan until it is fully executed. There are definitely some major problems with the amount of planning and forethought, but within the context of the movie it makes perfect sense that you just have to go along with it. I haven’t even gotten around to Harvey Dent slash Two Face, who is also handled quite well by Nolan. While I think the CGI for the damaged portion of his face was a little too over the top, and the line that he denied the use of any painkillers was unnecessary and unrealistic, but the early touches of his coin and his descent into madness fit in nicely with the Joker’s storyline. Even though I would have preferred to have seen Katie Holmes return as Rachel Dawes, I thought Maggie Gyllenhall did a fine job, and really made me care about her and what happens to her. As I said before, I can easily see why this tops so many people’s list of great superhero movies, if this movie hadn’t raised the bar so high, I don’t think as many of the superhero movies we have today would be nearly as good. Until next time, this has been Bubbawheat for Flights, Tights, and Movie Nights.