After going through a few documentaries, I figured it was time to get back to some more lighthearted fare. And it also helped that the newest announced acting school over at the LAMB is for Brad Pitt, who conveniently voices Metro Man in this movie. This movie is a real mash-up of different superhero tropes looked at through different angles, and there are quite a few surprise twists along with several unsurprising twists, which I will be mentioning farther down in this review in case you haven’t seen this movie yet. I don’t think knowing any of the twists beforehand really affect the outcome of the movie, but this is your spoiler warning anyway. There are also a few nice touching moments, and throughout the whole thing is a lot of laughs. 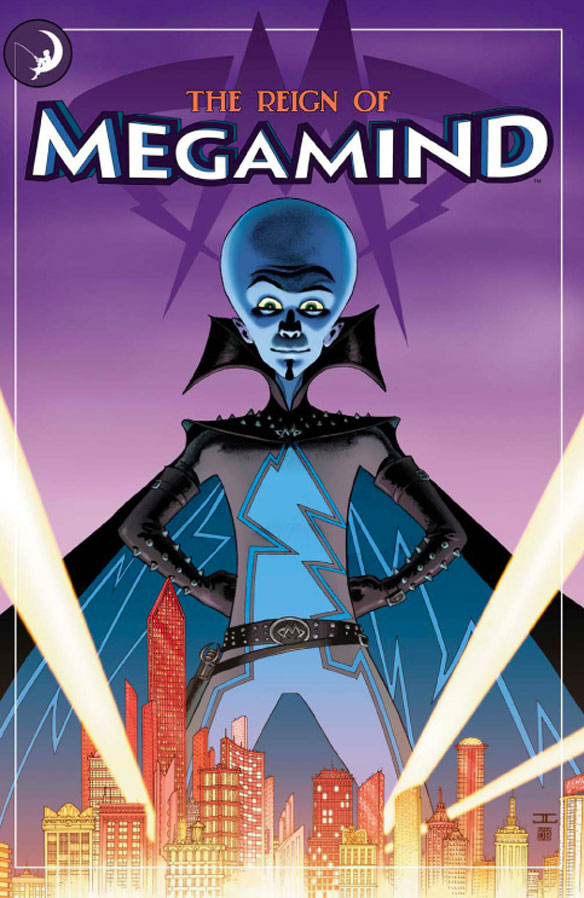 This movie reminds me in a lot of ways of Dr. Horrible’s Sing-Along Blog, although without any of the musical bits. The focus is on the supervillain rather than the hero, and the main focus of the movie is really all about a love triangle. But there’s also so much more than that. It’s a comedic look at how fate plays a role in how our lives turn out, but in the end it’s still the choices we make that impact who we are. The movie starts off with a look into Metro Man and Megamind’s childhoods. Metro Man got all the breaks, crash landing into a wealthy mansion where he got all the right attention, was constantly praised in school, and ended up a hero. Megamind however, crashed into the city’s prison where he was “raised” by convicts and his alien-fish-in-a-bowl Minion. While trying to claim the attention received by Metro Man, instead he got put in the corner. And it’s not until the events of the movie that cause him to realize that he can actually make different choices to change his fate.

There are a lot of references to other superhero stories and cliches. The whole start of the movie is a take off of Superman’s origin, with the baby being sent to Earth while the rest of the planet is destroyed. And of course, Metro Man is pretty much analogous to Superman himself, with all the same powers, though not the weakness. There’s also the fun Marlon Brando impression as Megamind trains Titan (or Tighten, both versions are referenced). Heck, there could even be an argument made that the entire Titan subplot is similar to the creation of Bizarro from a strand of Superman’s hair, at least I believe that’s one version of Bizarro’s origin. Metro city sounds quite similar to Metropolis, especially when Megamind mispronounces it, and Roxanne Ritchie is essentially a TV version of Lois Lane.

I’m not saying that Man of Steel stole from Megamind, but…

This movie is an origin story, and not only that, but it’s pretty much an origin story three times over. There’s the origin of Megamind as a villain, the origin of Titan as a villain, and the overall origin of Megamind as a hero. Which isn’t that much of a spoiler, because I know it’s in at least one of the trailers. I really appreciated the unique take on the whole superhero/supervillain roles, and it even starts off by joking about how cliche they are. Megamind and Metro Man are constantly fighting each other, and while Metro Man always wins, Megamind just gets out of jail to do it again. The conflict creates the conflict, it’s a constant cycle, until Metro Man decides to opt himself out of the equation. Without the presence of someone worthy to foil his plans, Megamind realizes that it’s not about the villainy. In a way, it was actually Metro Man himself that made Megamind into a villain. And this is echoed later on in the movie, when Metro Man himself gives Megamind that final push to make the turn into becoming a hero.

But the conflict is only half of the story, there’s also the romantic subplot between Megamind and Roxanne Ritchie. If this were a romantic comedy, I would call the whole case of mistaken identity and constant lying an incredibly clichéd story. But it feels a lot more fresh within the whole supervillain context. There’s also a bit of the whole Lois Lane cluelessness when she doesn’t realize that Bernard and Megamind are the same person during the scene in his evil lair, although the disguise is much more elaborate than a pair of glasses. The scene with the two of them in the rain is really quite hearfelt, and it once again seems to transcend cliché at least in my eyes with the fact that one of them has a giant blue head.

But aside from everything else, the movie is a comedy, and there are plenty of funny scenes in between the romance and action. I must say that I’m a moderate fan of Will Farrell. I’ve enjoyed pretty much everything I’ve seen him in, but I haven’t sought out a lot of his more hailed works like Anchorman or Talledega Nights. The chemistry in this movie between everyone was really great. The back-and-forth between him and Tina Fey were total fun whether he’s playing Bernard or himself. Brad Pitt also makes a great Metro Man, and it’s fun to hear him play off the casual arrogance of the character, and the hero/villain banter was a ton of fun. Even David Cross’s turn as the fish Minion was a great sidekick for Megamind without being too silly.

I had a lot of fun watching this movie, it really hits all the right notes in my book. Even the soundtrack is fantastic, from all the heavy metal tunes showcasing Megamind’s theatricality which are rather reminiscent of Iron Man, to the Elvis tune “A Little Less Conversation” early on at Metro Man’s presentation. It really feels like both a love letter to superheroes as well as a fresh look at them, and I loved every minute of it. I think the only real downfall of it is that some of the storylines and scenes within the movie are fairly standard, but the rest of the movie is so fresh that I know I didn’t care. If you haven’t seen this movie for whatever reason, give it a chance. Until next time, this has been Bubbawheat for Flights, Tights, and Movie Nights.