I was hoping that this would be the last bad movie I watched for a little while, but then Morgan from Morgan on Media pointed out this bizarre 80’s Australian superhero parody musical called the Return of Captain Invincible starring Alan Arkin and Christopher Lee, and after I looked up the trailer, it’s making me want to get back to some more classic cheesy superhero movies. At least after I watch Dick Tracy for our upcoming podcast, As You Watch. Which I should also mention that if you want to join in, I will gladly link any reviews to Dick Tracy so you can watch along with us, your deadline to get links in to me is Monday, August 27th. But back to today’s movie. I remember it being promoted as essentially a parody of all the superhero movies that were out at the time, though it primarily focused on the original Spider-Man movie, which was pretty dated even at the time considering that Spider-Man 3 came out before Superhero Movie. All of the other Superhero movie references are all just brief one-scene cameos, though the movie does stick with only parodying Marvel properties. I wasn’t much of a fan of the style of humor either, which basically consisted of playing a scene as close to Spider-Man as possible, then throwing in a sex/fart joke at the end. 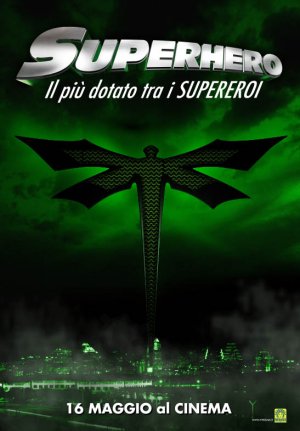 I’m almost ashamed to admit that I started out… I wouldn’t go so far as to say I was a fan, but I mostly enjoyed the Scary Movie franchise, and I own both Date Movie and Not Another Teen Movie though I do at least have a wife that can share the blame for recommending them. But with each successive movie, the quality got worse and worse, and it was never that great to begin with. While this movie did make me laugh a couple times, the rest of the time it just fell flat. I think one of the biggest problems is instead of being a genre mash-up of a lot of typical superhero movie cliches, it relies way too heavily on the plot of Sam Raimi’s Spider-Man origin movie, with a slight hint of Spider-Man 2. This doesn’t work for me mainly because Spider-Man already has a fair amount of humor already built into it, and instead of creating their own humor, the movie tries its hardest to amp up the funny moments. But instead of making the already funny moments funnier, they just become awkward moments of trying too hard and/or missing the mark.

The one thing I do have to admit is that the dragonfly costume itself actually looks pretty good. It’s similar to the Spider-Man costume without being too derivative of it. The other superhero parodies don’t come off quite so great, especially Tracy Morgan in a bad bald cap riding an ever-changing wheelchair as Professor Xavier. I also never understood why there was such an emphasis on the fact that not-Peter-Parker wasn’t able to fly. He got bit by a radioactive Dragonfly and got Spider-Man’s powers, why would he think that being able to fly would automatically be one of those powers? There’s not even an explanatory joke like “So, you got the powers of a Dragonfly, that’s awesome, so you can fly right?” “No, I’ve got quick reflexes, am extra strong, and can cling to walls.” “That sounds like Spider-man’s powers.” “No, these are completely original powers based on dragonflies.” “Like flying?” “Shut up!” Although if that scene were in this movie, I could only assume it would be capped with not-Aunt-May coming in and saying something inappropriately sex related, or farting.

Superhero movie is simply a case of lazy script writing. The cast is likable enough, especially Drake Bell as the Dragonfly. It was nice seeing a fresh face instead of the same old cast from all the other movies, even though several of them still show up in smaller roles. Being a Star Trek: TNG fan, I have to admit I enjoyed seeing Brent Spiner, and I was glad that he didn’t have any cringe-worthy scenes. Christopher McDonald was decent as not-Norman-Osborne, but I really thought the concept of the Hourglass as a villain name, and his outfit was just horrid. There’s no point in talking any more about this movie, you’d probably laugh more if you just watched Sam Raimi’s Spider-Man instead, not only that, but you’d be getting a great movie inbetween laughs too. This is just another tired excuse for parody. Until next time, this has been Bubbawheat for Flights, Tights, and Movie Nights.