← All Superheroes Must Die
What ifs! What if you could pair up any two superheroes? →

I enjoy watching a lot of anime, or at least I used to. I just realized I haven’t watched a good anime in a long time, but that’s beside the point. One of my favorite types of anime are the ones that are so out there and weird, they are hard to describe. Gantz is one of those anime. And a couple years ago I saw that it had been made into a live action movie, and when I saw the trailer for it, it looked like they did a good job matching the look and style of the anime so I had to watch it, and I wasn’t disappointed. I will do my best to describe the general concept. There is a giant black ball in the middle of a room, it transports people who have died to the room every few nights with little explanations except for a picture of an alien, briefcases with black leather suits and weird high-tech guns. They are given a time limit to kill this alien in reward for points, if they get 100 points they can have their memory erased and put back into the real world, or they can resurrect a fallen teammate. There’s a bit more to it than that, but that’s the gist of it. 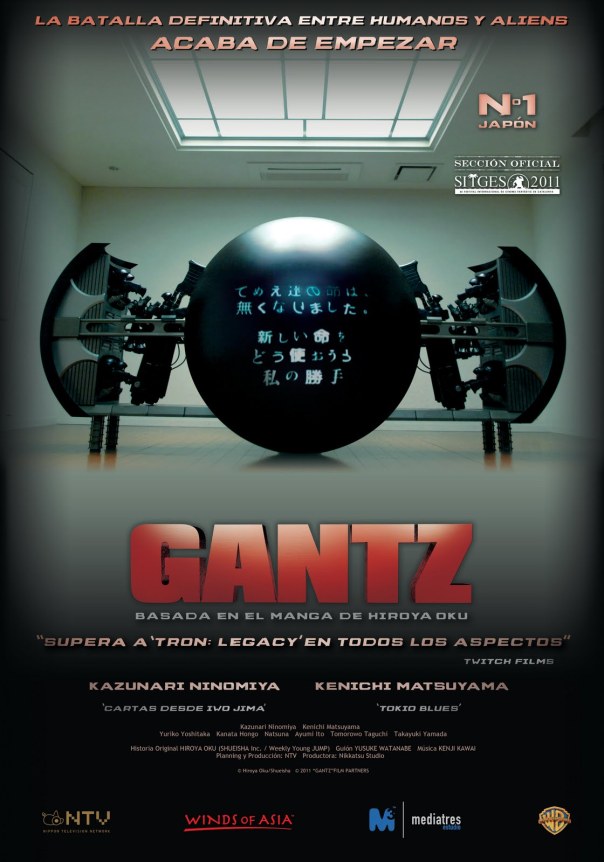 The movie mostly follows two main characters, Kei Kurono and Masada Kato, Kei is a high school student and a bit of a slacker. Kato has spent time in juvie and is taking care of his younger brother, he’s a pacifist but also cares greatly about other people and wants to help them as much as possible. The two of them knew each other in grade school, where Kei was a bit of a hero and Kato was a bit of a wimp, they re-met each other by chance at a train station when a homeless man falls on the train tracks. Kato immediately goes to help him while everyone else, including Kei just stares at him. After saving the homeless man, Kato is having trouble getting back onto the platform, Kei finally goes to help and they both end up being hit by the train where they first find themselves in Gantz’s room. Through the course of 3 missions, Kei goes through an interesting character arc, first being scared and confused by the whole situation, then starts to become drunk with the power the suits and weapons give him, before finally becoming a hero at the end.

Those suits are pretty sweet.

The superhero aspect of this movie is an interesting one. Everyone that is chosen by Gantz is pretty much randomly based on who happens to be dying at the time the next game starts as well as all the previous surviving members. Everyone has available to them a form fitting suit that gives them a variety of powers, though no instructions on how to use it, and high tech guns that for some reason have about a five to ten second delay between firing the gun and seeing the devastating effects of it. This is a very violent movie with human and alien blood by the gallons being splattered all over the place, as well as severed limbs. But even with all the blood, there’s not really much gore.

I mentioned that I originally watched the anime version of this, and also before it was an anime it was also a manga, there are quite a few changes between the anime and the movie that I thought were a little disappointing. One is the complete lack of nudity, I hope I’m not coming across as a perv, but as a guy I do enjoy the occasional excuse for nudity, and the anime has quite a bit of it throughout its run. The movie has cut almost all of it out. I also thought it was odd that they changed the girl’s name from Kei Kishimoto to Megumi Kishimoto which really only removed a couple lines about her having the same name as Kei Kurono, there was also a subplot about when she returned home, she found herself still alive. In the anime, someone had found her and saved her which meant that the Kishimoto who was transported to Gantz was actually a copy which brought about an interesting set of questions about the whole situation. The rest of the changes were understandable to condense the 26 episodes down to a 2 hour movie.

The look of the aliens in this movie was amazing, from the goofy looking Green Onion alien at the beginning, to the also goofy looking robot guy alien, to the giant statue aliens at the end. They all looked and moved almost exactly as they did in the animated version, and translated very well to live action. The human characters were also chosen quite well and looked a lot like their anime counterparts. The one character that I thought was an odd choice was the older guy with glasses that showed up in the first mission along with Kei and Kato, he never really does anything, has no character arc, but for some reason survives until the end of the movie. I don’t even remember his name because he’s used so little.

The fight scenes were all pretty impressive, even with all the blood flying around in certain scenes, for the most part the characters were interesting and made you care about them. There were a couple annoying characters, like a young kid in the second mission, but luckily he didn’t stick around nearly as long as he did in the series, there’s also several characters that don’t get any development whatsoever so you don’t really care about them when they get killed off. But overall I enjoyed it a lot, I thought it was a fitting complement to the anime, though I can’t say anything about the original Manga since I haven’t read it. It’s worth a look if you like anime or sci-fi mindtrips. Until next time, this has been Bubbawheat for Flights, Tights, and Movie Nights.

← All Superheroes Must Die
What ifs! What if you could pair up any two superheroes? →