Welcome to my first blogathon! In case you haven’t heard, I’m hosting my first blogathon, called the Comic Strip Double Dip Blogathon. There’s still plenty of spots left so feel free to check out the full list and sign up! So here I am today with my first entry into my own Blogathon, my Comic Strip Double Dip offender today is Nathan Fillion who played both the clueless hero Captain Hammer in Joss Whedon’s Dr. Horrible’s Sing Along Blog as well as the voice of the womanizing Steve Trevor in DC Animation’s Wonder Woman. I’ll be taking a look at both of these movies and both of the roles and see how they compare to each other, and which one is worth seeing. 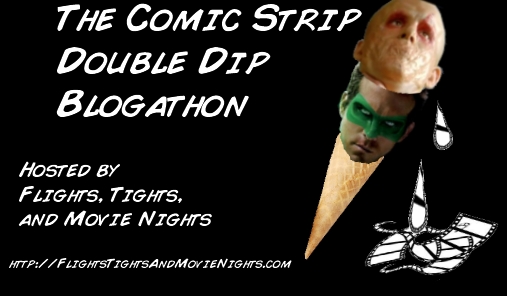 Let’s take a look at the movies first.

They look pretty evenly matched, Wonder Woman is slightly longer, and is animated. In both movies he’s the second banana. In Dr. Horrible, he’s the antagonist to Neil Patrick Harris’s Billy, and in Wonder Woman, he’s the sidekick to Keri Russell’s Diana. In both movies, he’s the in-charge hero, confident in everything he does and immediately goes after the first piece of tail put in front of his face. As Captain Hammer, Fillion not only gets to work in the Whednoverse, but he also gets to show us his singing chops. As Steve Trevor, Fillion gets to show us his fighter pilot chops and kicks some major ass that’s not just pounding on a weakling. It’s a pretty tough choice trying to pick which one’s better, but if I had to decide, Dr. Horrible is the better movie, but Steve Trevor is the better character.

And in both cases, he gets the girl.

There’s still plenty of time to get in on this blogathon, you can follow this format or use one of your own, just be sure to e-mail me your link, or post is in the comments section of the sign-ups page. Until next time, this has been Bubbawheat for Flights, Tights, and Movie Nights.