Last month I decided to join in on a handful of blogathons and other projects. Some of them I got to in a reasonable amount of time, and this one was one of those that got pushed back a little bit too far. Over at Your Face, they have been doing a Shaw-gust blogathon during the month of August, reviewing films from the Shaw brothers, who are best known for their plethora of kung-fu flicks in the 70’s though they produced many movies outside of that range. These are the flicks known for their fight scenes and bad dubbing, almost any kung-fu parody from this era featured the badly out of synch lip movements and very rough translations, and that is how I watched my contribution for what ended up slipping into Shaw-tember, Super Inframan. And even though it predates them by many years, this movie totally feels like a handful of Mighty Morphin Power Rangers episodes strung together. There’s a lot of guys in rubber monster costumes, a lot of kung-fu, and a whole lot of jumping around. It’s got plenty of fun moments, and just as many wtf moments. 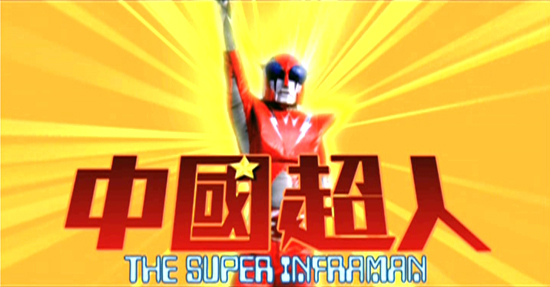 This movie is tough to explain if I tried to go through the actual flow of the plot, but the basics of it is that there’s a demon princess, translated in the dub as Dragonmom, with her group of mutant/demon/robot henchmen that are taking over the world. The only way to stop them is for this group of kung-fu scientists to create Super Inframan by installing a miniature nuclear reactor into a volunteer which will make him practically invulnerable and able to access a wide variety of super powers which vary from fight to fight, and while he’s sporting a nuclear reactor, it’s also somehow solar powered, which comes into play during a critical moment in the plot, and yet doesn’t really seem to matter. Yes, it’s this kind of clarity and storytelling that you can expect throughout the entire runtime of Super Inframan.

Inframan as a hero is fairly bizarre. His outfit looks like a Power Ranger outfit made out of kickboxing padding. His abilities include: backflips, super strength, exploding punches and kicks, arm lasers, helmet laser, the ability to grow 50 feet tall, firework ninja darts, sparkler rocket boots, million volt thunderfists, and the ability to fly which he only uses in the oft-repeated transformation sequence. Whew, that’s a mouthful. For the most part, the fight scenes are the best part of the movie, with plenty of kung-fu action combined with random explosions everywhere. And I mean everywhere. Inframan punches a random costumed henchman and there’s an explosion, he sends one flying and there’s an explosion, he shoots a laser and there’s an explosion. None of the explosions are very impressive either, they’re just the size of a fairly tame firework with some sparks and smoke. 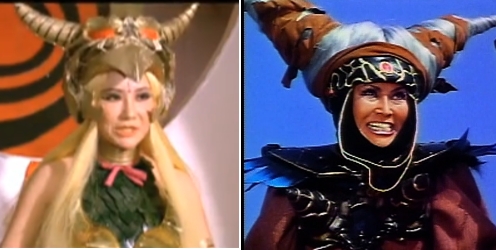 She just got about 30 years older.

On the villain side of things is a little bit better, while all the main henchmen are just guys in rubber suits, they are all very distinct and unique from each other. There’s the plant guy who dives underground and becomes a giant vine tentacle trying to destroy the kung-fu scientist lab. There’s the drill mutant, the crab guy who becomes giant at the very end of his fight for about 30 seconds just to show that Inframan can also become giant sized, which he never does again, and my favorite are the ball and chain robotic twins. These are used towards the end of the movie and basically have a ball and chain plus claw hand for both arms and their head. There’s also plenty of underlings dressed in black with skeleton style outfits who mostly fight the kung-fu scientists. This batch of misfits is led by Dragonmom who totally looks like a younger Rita from Power Rangers, and her second in command is She-Demon who seems to mostly be there for her cleavage.

The plot is extremely episodic with each episode featuring a different henchman, and often times feeling like a completely different genre. One episode has them brainwashing one of the kung-fu scientists and it turns into a CHiPs style motorcycle chase complete with 70’s era chase music. Another episode feels like a Kaiju movie complete with this random family consisting of an older sister, a tween boy and little girl. Top it off with several kung-fu battles and you have yourself Super Inframan in a nutshell. I never did watch a lot of these kung-fu classics unless one made it onto an episode of Mystery Science Theater 3000 but I was… I wouldn’t say a fan, but a regular watcher of Power Rangers during its early days. It made me wish I had seen more of these kind of movies because I think I would have enjoyed it a lot more combined with a nostalgia factor. As it was, I got a kick out of some moments, especially some of the more random elements that made little sense, but that wasn’t really enough to hold my interest throughout the entire movie. If you watched a lot of these movies when you were younger, this will bring back a lot of memories, for everyone else it’s just a hot mess. Until next time, this has been Bubbawheat for Flights, Tights, and Movie Nights.