While I still have plenty of straight up superhero movies to go, I thought it was a good idea to branch out into non-superhero movies based on graphic novels. And of course, this black and white, animated tale of the life of an Iranian woman living through a revolution and a war, dealing with prejudice at home and in France, was originally a graphic novel by the same name. Even though it’s in black and white, the animation is visually striking, not only that, but the story itself is very engaging. Not only does Marjan suffer through a lot of strife, but she also has plenty of moments of joy and is always surrounded by people who care about her. It’s a really great movie and well worth your time to watch. 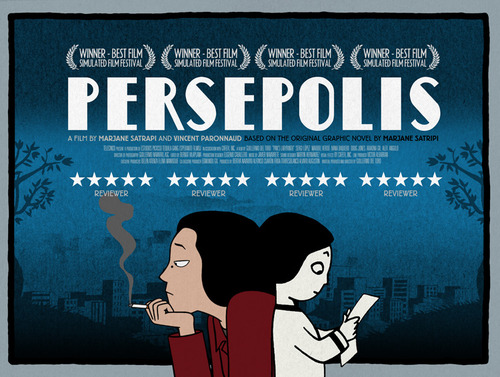 It’s not too surprising that I am not very familiar with Iranian culture or history. I’m not one of those people who would confuse Iran for Iraq, but I’m not too far off from that. I know it’s in the middle East, and that’s about the extent of my knowledge. This movie does do a fair bit to further my knowledge of Iran’s history, and it doesn’t do it in a way that’s dry or boring. Most of the history is told through when Marji is at her youngest, and there is a childlike innocence and enthusiasm to the revolution from the Shah. Once she starts to grow older, there is much less of a focus on the larger events happening around her and more of a focus on the smaller events that only effect her own life and those surrounding her. There are a few other brief mentions later on, but this really is Marji’s story.

This wouldn’t be as interesting of a movie if Marji herself wasn’t an interesting person. Her family is middle class, they rarely agree with their own government at the time, whether it’s the Shah, or the Islamic Fundamentalists, but they keep their head down with the exception of Uncle Anoush who spent nine years in prison under the Shah’s reign, only to be imprisoned once again under the Islamic rule and executed, but not before sharing his ideals and stories with a young Marjan. Her parents are very loving and accepting, and her Grandmother often acts as her conscience. Marji herself is very liberal and outspoken, something that often gets her into trouble with the air of oppression surrounding her in her own country, this is the reason why she ends up leaving the country for France, spending her college days moving from place to place, wherever she could find someone who would take her in for a while.

One thing I have yet to mention is the humor throughout the movie. There are plenty of serious subjects: war, revolution, execution, sickness, death. But in between all of this is a very playful sense of humor, whether it’s young Marji marching back an forth in her living room shouting “Death to the Shah!”, Marji recalling her ex-boyfriend who she caught cheating on her as a bucktoothed dweeb when he was previously portrayed as a handsome gentleman, or an adult Marji starting to pull her self together after a bout of depression to a montage while she sings “Eye of the Tiger”. There are plenty of great laughs to be had, and they are all accentuated by the fact that this is an animated movie rather than a live action one. 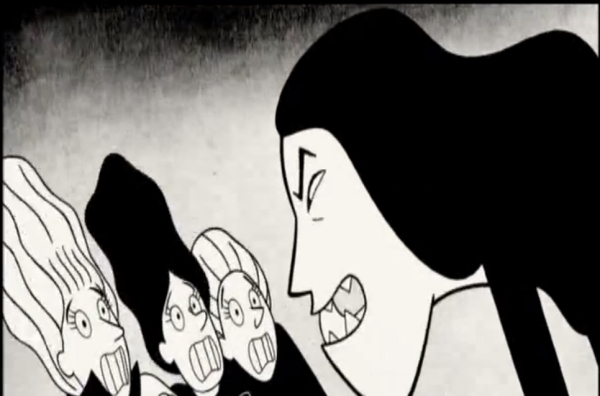 The animation itself is very stark in some places, yet it can also be very elegant and detailed in others. While it is in black and white, it’s far from boring or basic. I also really love the imagery in the movie, while it deals with plenty of death and politics, it does it in a very subtle way, showing just a hand, or a cloud of smoke instead of going into more gory detail. The voice acting was also quite good, while I did watch the English dubbed version rather than the original French dialogue, the two main actresses for Marjan and her mother are both the French and English voices. Sean Penn and Iggy Pop voice the father and uncle Anoush respectively, and both do a good job without taking me out of the movie with any recognition. I learned a lot about Iran, and a lot about the life of one Iranian woman and her struggles living in two different countries. Until next time, this has been Bubbawheat for Flights, Tights, and Movie Nights.