← The CK’s Not-So-Secret-Santa Review Swap
Filmwhys #21 The Seventh Seal and Batman: The Movie →

Happy New Year! There hasn’t been a lot of voting in my “what I should watch in 2014” poll, but the winner in both the poll and the comments was non-superhero movies. So at least here in January, I’ll be watching some more varied movies that are still based on comics. But today I’m doing what I thought I did a couple months back until I realized that there was still a DC animated movie that I had yet to review, even though I had seen it before my website days. Public Enemies was the first of these movies to really focus on the Batman/Superman team up, and while I didn’t like it as much as Apocalypse, I still had a lot of fun with it.There’s a ton of cameos of various supervillains and some lesser known heroes, but it brings back the ever familiar voices for Batman, Superman, and Lex Luthor which is always a good sign even if it has a couple odd patches here and there. 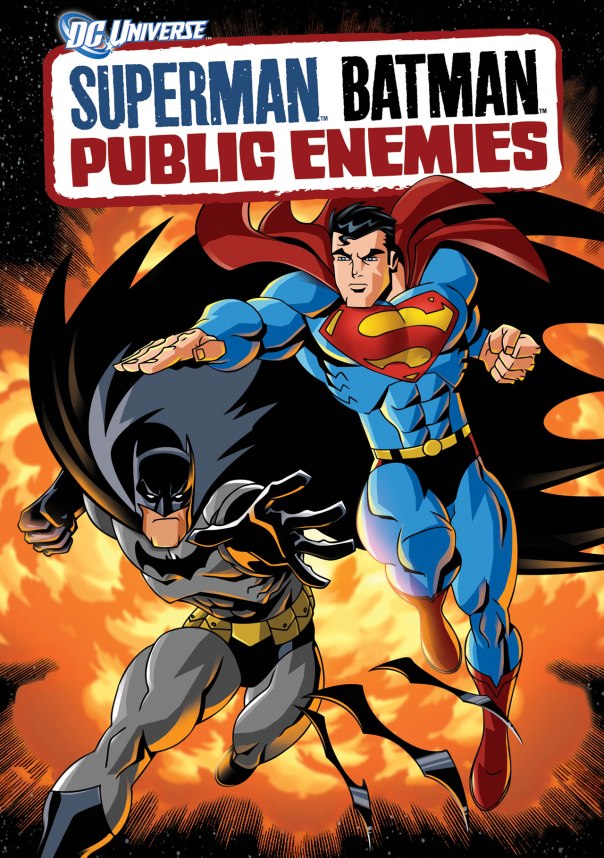 This movie starts off with the election of Lex Luthor to President of the United States of America, and shortly thereafter coming after vigilante superheroism, instead employing a small number of heroes as government sanctioned such as Power Girl and Captain Atom. Oh, and there’s a giant Kryptonite meteor heading directly for Earth. Meanwhile he has time to frame Superman for the murder of Metallo and place a billion dollar bounty on his head bringing the supervillains out of the woodwork, and quite a few heroes as well. The brief plot description sounds a little bizarre and disjointed, but the story actually flows quite well from one plot point to the next. There is the bit of a logic leap as to how these villains are able to find Superman in the first place and show up at pretty close to the same time, but it’s really just an excuse to showcase a ton of villains like Black Manta, Solomon Grundy, Gargantua, and plenty of others. 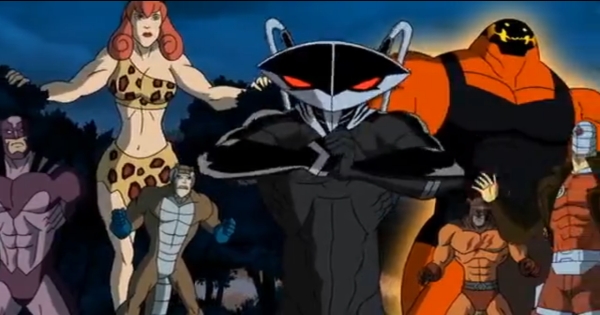 I recognize very few of these villains, but I’m sure someone does.

Honestly, one of the only gripes I have about this movie is the design of Superman. I don’t know what it is about him, but his profile makes him look about 10 years old to me. When he’s in action, and all the other characters are fine. But when they make him stop and look to the side, it just doesn’t look much like Superman to me. There’s also another bit of a stretch when it comes to Luthor’s descent into madness, but it’s really just an excuse to get him into his power suit. There’s also an appearance by Captain Marvel, which I thought was an odd choice as he is so similar to Superman in powers and appearance. Besides the fact that I’m not sure even how well known he is. There’s also little done in the way of introducing any of these characters aside from their names, if you don’t already know them from the comics you won’t be completely lost, but there will be a lot more “who the heck is that?” While I had heard of Captain Marvel before, I still have no idea who Captain Atom is and why he was able to do what he does in this movie.

The voice work in this movie is excellent as always, they bring in Allison Mack, better known as Chloe from Smallville to voice the role of Power Girl, better known as the Supergirl with the massive cleavage. And of course, they do get the chance to throw in a boob joke. It’s always a great joy to hear Kevin Conroy as Batman, Tim Daly as Superman, and Clancy Brown as Lex Luthor. They’ve made their voices iconic and any other person to take on the roles in voicework has a lot to live up to. The action is also handled quite well as it pretty much has to considering this movie runs a very short 67 minutes, it really moves from one fight to the next. And yet the brief connective tissue does exactly what it needs to do to have things make sense in context without leaving you scratching your head even if you’re not very familiar with some of the heroes or villains that show up. I liked it quite a bit more than I remembered, though I do still stand by my decision not to include it in my top 10 animated DC movies. Until next time, this has been Bubbawheat for Flights, Tights, and Movie Nights.

← The CK’s Not-So-Secret-Santa Review Swap
Filmwhys #21 The Seventh Seal and Batman: The Movie →