The Return of Swamp Thing

The Return of Swamp Thing 1989

I knew very little about the first Swamp Thing movie, and I knew even less about the sequel which came out 7 years later and the only connection between the two movies are the actor that plays Swamp Thing in the suit and the villain Arcane who supposedly died in the first movie. I would have thought that they would have used the Dick Durock’s voice once again for the Swamp Thing, but for some reason* they chose to hire a voice actor do ADR all of his lines. The tone of this movie is also much more light and comedic. Unfortunately this makes the campy comedy feel much more forced than in the first movie where everyone was taking things seriously. There’s still some cheesy fun to be had, but it’s not nearly as good of a movie overall than the first one. 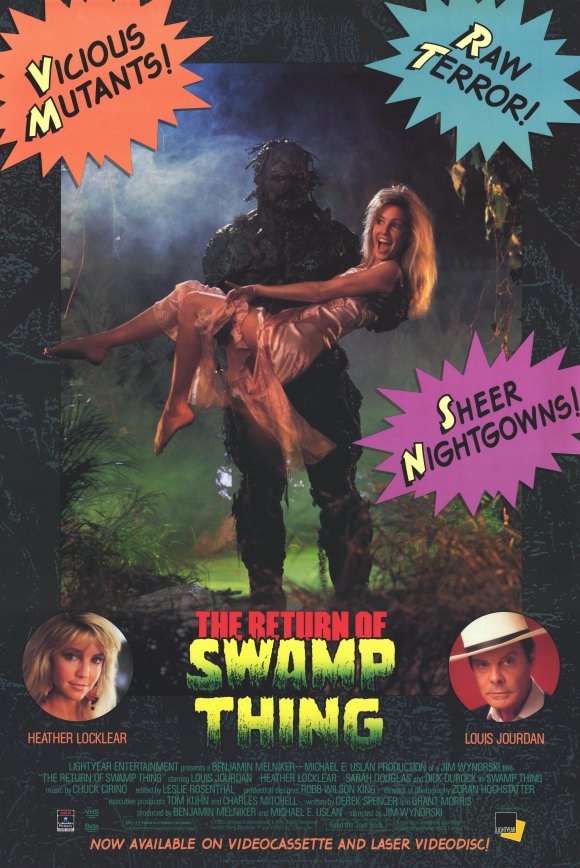 First off there’s the entire opening sequence that introduces a weird leech monster that honestly looked like a bad imitation of Man-Thing from Marvel and Swamp Thing comes out in a much more typical superhero fashion to save one of the hapless men from his fate even though there were a couple others before him that weren’t so lucky. Swamp Thing himself is slightly updated, mostly with a less smooth face cluttered with a bit more foliage. I didn’t think it was a bad decision at all, but I also didn’t think the first look needed an update either. The love interest also changes from some type of agent who can generally handle herself to the pretty much helpless Heather Locklear who also happens to be Arcane’s step-daughter and completely infatuated with her houseplants back in California. She feels completely out of place in this movie even though it’s generally played for humor.

One bright point in the movie is Sarah Douglas who plays Arcane’s right hand woman, scientist, and love interest. Out of all the side characters, she plays things the most seriously and also actually has some type of character arc through the movie. She is always doting on Arcane, but she becomes suspicious of him when she learns that he is completely willing to sacrifice her if it means success in his experiments and starts working against him from then on. Arcane himself is also right along the lines of his assistant continuing the character that he started in the first movie.

One of the things I liked the most about the first movie was the nerdy black kid Jude. In Return of the Swamp Thing there’s two kids and they are two of the most annoying kids I’ve ever seen in any movie. There’s the chubby redhead with a whiny voice, and a skinny black kid that’s more or less the leader of the two. They’re introduced with the redhead coming over to the black kid’s house to look at some Playboys while his parents are away and they get ambushed by the leech monster from the beginning who just kind of stands there while they act scared and break a window before Swamp Thing comes to the rescue by blowing up both of the parents’ vehicles. Then the two go on a quest through the swamp to try and get a picture that they think will make them $10,000 which does payoff in a brief mid-credits scene, but every time they are on screen they are just bickering with each other or making fat jokes at the redhead’s expense, and I wouldn’t be surprised if his voice was also dubbed over because it didn’t feel like it quite matched up.

The makeup overall seems like an improvement over the first one. There are quite a few more creatures which are all genetic mutations combining humans with various animals with less than desirable results, though they all look much better than either of the two creatures in the end of the first Swamp Thing, especially the elephant/human hybrid shown at the beginning. There are also a few moments of more subtle effects like at the end when there is a sprout coming out of someone’s foot. The reasons surrounding it don’t work very well, but at least it does look good. Of course, there’s also several moments of cheesy animated effects that look extremely cheap and dated alongside the great practical makeup.

There’s also a lot of time spent with the brainless security guard and his smart second in command who acts with her eyebrows a little bit too much. I was not fond of the style of humor they used for him at all throughout the movie, except when she mocks him for being so stupid and it moves into a Jaws-style comparing of old scars leading to them almost making out with each other before getting interrupted. Most of the humor in this movie I wasn’t very fond of, from the beginning where Heather Locklear is going on and on about her plants where her very large co-worker is just sitting, reading, and basically ignoring her, to the occasional puns from Swamp Thing himself or some of the other minor villains. It just didn’t click as well with me when compared with the first one, it felt too much like the filmmakers were trying to make a tongue-in-cheek B-movie instead of making a low budget serious movie that ends up being a fun B-movie. It still had it’s moments, but not nearly as enjoyable as the first. Until next time, this has been Bubbawheat for Flights, Tights, and Movie Nights.

*according to IMDB’s trivia section.