Vincent Has No Scales

And finishing up with Aquaman April I decided to watch this movie that I didn’t even realize was French until I looked it up right before watching it. This is a film that I just happened to discover on the library streaming app Hoopla by searching for “superhero”, and based on the description it sounded basically like a low budget French Aquaman movie. And after watching it, that’s pretty much exactly what it is. There’s not really much action, instead it’s a bit more of a combination romance with a little character study. But honestly there’s really just a whole lot of nothing going on in this film aside from the main character Vincent swimming a lot, eating, and getting himself wet in one way or another. There is a bit of super powers here and there and kind of an action scene in the second act, but there’s also just plenty of shots of scenery. Don’t get me wrong, the scenery is absolutely gorgeous most of the time, but it’s still just scenery and Vincent swimming or chilling.

One of the more interesting things but also problematic things about this movie is the overall lack of dialogue and explanation. Vincent is generally a pretty quiet guy and when he does start dating Lucie, most of their interactions are more physical than verbal. There’s also a very awkward chemistry between the two actors. It does seem to be deliberate to the movie as Vincent is a bit of an awkward character, we don’t get a lot of backstory to him or his powers, all we really know about him is that he can swim fast and is strong when he’s in water or just wet in general. He also is a bit of a drifter, taking odd jobs and finding places to live wherever he can. We see him get kicked out of one place because he hasn’t found a job, and later on he seems to be living in a room through the kindness of whoever lives there. There’s no real exposition or explanations of what’s going on, much of it has to be inferred by what little we see going on. It’s not until Lucie and him have been dating for a little while that he explains to her, and therefore to the audience about how his powers actually work. At least to the extent that he knows.

There is a bit of an action sequence in the latter half of the film as Vincent rescues his construction worker boss slash friend after he gets roughed up by some clients who weren’t happy with their work. Of course, this isn’t a typical superhero movie and Vincent isn’t a typical superhero so he doesn’t confront the guys directly. Instead, he picks up a large, manual cement mixer and throws it into their car. After dousing himself with a convenient nearby tub of water, of course. He also swats one of the guys away as he helps his boss slash friend out the door shortly before they call the police. And that’s what incites the extended police chase that starts with him and his boss in the car before moving on foot slash in the water. And again, this isn’t an action film. There are no fights, there aren’t any guns blazing. In fact, not a single gun is even drawn, though that’s also likely the difference between French cops and US cops but that’s a discussion we won’t get into here. Vincent manages to find many different water sources to help him evade the cops many different times including one where he actually does get caught and handcuffed, but luckily it happens during the rain so as soon as they get outside, he’s able to break himself free from the cuffs and escape once again. 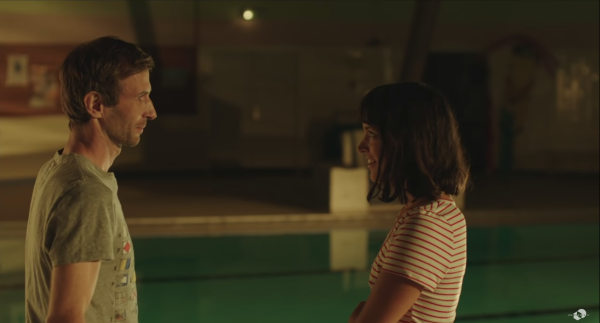 Aside from the super powered stuff, there’s also the romance that’s more or less at the heart of the movie despite the fact that it almost completely goes away during the latter half of the film while he’s being chased by cops. Their romance is defined by its awkwardness, but it’s also very cute and innocent in general. This is perfectly represented by their first on screen kiss. The two are standing close to each other and Lucie leans towards Vincent who seems to be surprised by the advance and backs away slightly. He then changes gears and leans in towards Lucie who herself then backs away from his advance momentarily before waiting a few moments and quickly leans in for the kiss. It’s not movie chemistry, it’s not playful. It’s the definition of awkward but it reflects how Vincent doesn’t feel like he fits into society and he’s found this woman who shares his awkwardness and as he reveals his secret to her, she accepts him unconditionally. There are definitely some well meaning and well placed moments throughout this film, but even though it’s barely over an hour long, the slow pace of the film is difficult to get past despite how gorgeous it looks. And though I haven’t mentioned it yet, the only special effects in the movie are used to showcase Vincent’s swimming which isn’t anywhere near Aquaman speed, but it’s also done completely practically and does look great for what it’s supposed to do. I just wish there was a bit more meat to the story and a little more excitement, or even just a little more romance, it just needed a little more movie in general. Until next time, this has been Bubbawheat for Flights, Tights, and Movie Nights.