I wasn’t really planning on seeing this movie in theaters, it had a lot of negative hype surrounding it as it was from (director Jonathan Leibsman) and producer Michael Bay, the early buzz around the movie was that they were going to be aliens, they weren’t going to go with the full Teenage Mutant Ninja Turtles title, the turtles themselves had really weird noses, and it had the critic’s bane Megan Fox in a major role as April O’Neal. It didn’t help once the reviews started coming in either. Outside of a couple positive reviews, including one from Today, I Watched a Movie whose taste is often similar to mine, everything was coming back negative and further diminishing my desire to see this movie. But I was overruled by my family and to my surprise, it wasn’t the crapfest I was anticipating. Don’t get me wrong, it’s not an amazing achievement in cinematic history either but I wasn’t counting the seconds until the movie was over and I caught myself enjoying the moments between the turtles and other things here and there. 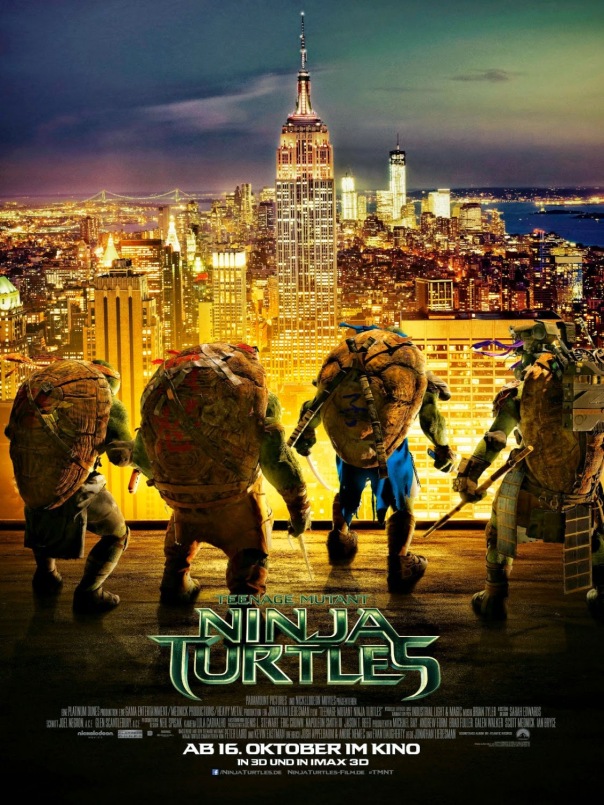 I think that there’s a certain line where it comes to TMNT fandom that you have to be at in order to fully enjoy this movie. Of course it helps to be a fan of the turtles in one of the many versions they’ve had throughout the years, but it hurts if you are such a fan as to be a bit of a purist when it comes to the backstory of the turtles as there are many things that have been changed in this movie, as is always the case when it comes to a new version of the television show or the movies. Here, the turtles are much more closely tied to April O’Neal and the Shredder as it was her father who worked with William Fichtner’s Eric Sacks and when there was an explosion at the lab, O’Neal as a young child was the one who saved the lab rat and test turtles to free them into the sewers. Meanwhile Sacks is the one who is working for the Shredder and the Foot Clan. And while the Foot are still ninjas, they have no problems with using modern weaponry which I also didn’t have a problem with.

There are still things that I did have a problem with in this movie, and the first is the Shredder himself. His battle armor just looks completely ridiculous and makes no sense that it is able to fire several blades from its hands and then magnetically/magically retrieve them. The action scenes also suffer from Zack Snyder syndrome where they have these brief moments of “stylish” slo-mo where nothing of note happens before going back to normal speed for the rest of the shot. On top of that the entire plan of the villain both makes no sense, and is almost directly lifted from the first Amazing Spider-Man. I also had a problem with Splinter. I wasn’t a fan of his voice or his origin which artificially brought in his role of being a mentor and father figure to the turtles as well as his mastery of Ninjitsu from what looked like a children’s book he found in the sewers. Whoopi Goldberg was also both underutilized and felt like no one knew how a news organization actually works, in this day and age whenever someone comes up with a sensational story with sketchy sources it would be much more likely that the news would run it as their top story rather than laughingly bury it.

But there are also plenty of things this movie got right. I enjoyed the interactions and humor that came from all four of the turtles and their interactions with each other. They got the personalities right which is one of the most important things to pull from the long history of the turtles. I also enjoyed the subtle nod to Usagi Yojimbo through a joke about what would have happened if he had used rabbits instead of turtles. The voices took a little getting used to, especially Donatello’s overly nasal voice and Raphael’s overly gruff voice. It occasionally felt like they took their distinct personalities a little too far into caricature territory. I also liked Megan Fox’s portrayal of April O’Neal for the most part as well as her interactions with her coworker played by Will Arnett. And when the action scenes weren’t Snyder-ing, they were a lot of fun, especially the downhill mountaintop car chase and the callback to the buck-buck during the climax. All in all, I wouldn’t call it the worst movie I’ve seen so far that came out this year, but there is just as much in this movie to dislike as there is to enjoy. Until next time, this has been Bubbawheat for Flights, Tights, and Movie Nights.