It seems like it’s been a little while since my last installment of Superhero Shorts, where I take a look at a superhero themed short film and ask a few questions of the creator. But I’ve got a couple for you here in the near future starting off with Super Zero here today from writer/director Mitch Cohen where he takes the zombie apocalypse and throws in a schlubby gamer geek with a knack for gadgets and brain cancer who ends up being a Bad-Ass Zombie slaying superhero. As usual, you can watch the short below, or you can visit Mitch’s YouTube channel.


While I had seen this short film pop up a week or two ago in my feeds, I didn’t give it too much thought as I assumed it was more of a zombie action short with some comedy mixed in. What surprised me when I did watch it was that it did have a strong feeling of a superhero origin story, as well as the feeling of being a pilot to an ongoing series. Which, as I have seen in other places, it does hope to be. There is a great thread of humor throughout the short as it pokes fun at some of the usual apocalypse tropes, but it does create some very real feeling characters, especially the lead character, Josh. Though I will say that the psychotic clown was a little bit over the top, but it was the one weak spot in an otherwise great short. Especially since I can’t think of any other movie that throws a superhero of sorts into a zombie movie. And Josh is definitely a superhero right along the lines of Green Arrow or the Punisher. And even his brain cancer is a pitch perfect hook that is both his greatest strength as well as his greatest weakness. But enough from me, let’s hear a bit from writer/director Mitch Cohen.

Bubbawheat: While Super Zero is obviously inspired by the many zombie apocalypse movies around, there is also some superhero influence to it. Both with the name of the short itself, as well as the fact that it plays in part similar to a superhero origin story. How did the concept of bringing together these two types of movies come about?

Mitch Cohen: It all began with a story I wanted to tell about discovering what makes someone unique and special and that could lead to anything, even becoming a kind of superhero. Taking like you said, a the familiarity of an origin story, but then spinning it so people could look at in a different light and find a connection with the thematic in a new way. I also wanted to find a way for the hero to realize his powers without having to have them gifted to him, or have him changed by something fantastical that makes him more than a normal person. Even the irony of it being something that you would think is the worst liability a person can have.

To achieve this I thought maybe the world changes and not the person and his uniqueness stems from simply being himself. I loved that message. Nothing changes the world like a good ol’ Zombie Apocalypse and I conceived the conceit of how that could make him powerful. How do Zombies know if you are a living human or not? In lots of zombie lore they’re hungry for brains. So what if Zombies weren’t attracted to Josh’s brain? What if he was invisible to them? Everything kind of developed from there.

BW: What were some of the biggest influences to the movie, both on the zombie side of things and the superhero side, aside from the 28 days later nod?

MC: On the Zombie side I’m a big fan of the original Dawn of the Dead and also the re-make. Both of those left an impression on me in their own ways. Combining some crazy horror with a tad of humor and making it all fun. I think the original was the first Zombie film I ever saw. Also not sure this is classified as a “Zombie film” but, I am Legend was pretty great. It would have also been a million times better if they went with the original ending. If you haven’t seen it, you should check it out. It changes the entire film and makes it so much more interesting.

BW: I haven’t seen that one yet, though I have heard about the differences between the two endings.

MC: On the superhero side, the first Iron Man was a ton of fun and had a great balance of not taking itself too seriously, but never feeling “cartoonish” at the same time. I think that did a lot in terms of respecting your core audience, but making it accessible to everyone at the same time. And my other favorite film, which is the polar opposite in tone is Unbreakable. That film is really interesting to me for many reasons, it keeps true to many of the tropes of superhero films, but presented in a way that was really novel.

BW: If this continues on in some form, do you think you would expand more into the superhero realm, stick closer to the zombie side of things like the Walking Dead, or would you like to try and tow the line between the two?

MC: Definitely do both. From inception this short was to be a proof of concept teaser for a series or a feature film and the basic events for the entire storyline are already mapped out. I think there is a nice balance of narrative that can be (and will be) explored that supports both a Zombie and superhero plot. My big thing is playing off of what films in both genres have already done and not needing to explain my universe as much. People already know the basic tenants of both worlds, so I don’t have to spend my time rehashing what everyone already knows and has seen countless times. I can develop Josh as a person and his arc becoming a force to be reckoned with at the same time place that in the bigger story of civilization trying to stave off their extinction. Even though this can sound like too much to try and do, I don’t think it is. At the core its still a hero’s journey. And that journey just happens to take place in the Zombie Apocalypse. 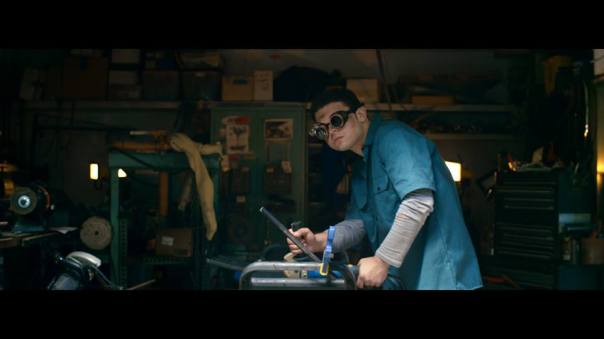 BW: Did you have any other ideas for Josh’s weaponry that didn’t make the short, either due to time constraints or budget where you weren’t able to create the prop/effect?

MC: Absolutely. It was impossible in terms of time and money to work in the other stuff, but there are a ton of things I want to bring to life. Josh is like Iron Man, Batman and Doc Brown all rolled into one shy, but brilliant Gamer Guy. He knows how to build stuff from his engineering background and knows what would be effective weapons and tools from movies/comics/video games. I can’t wait to bring this stuff to life. He’s going to definitely be a crafter.

BW: One of the most unique shots in the short is when one of the characters takes a baseball bat and we see the hit from the zombie’s perspective as the bat sticks and the zombie & camera fall to the ground. Was that a difficult shot to set up and pull off?

MC: This is a great example of the beauty and resourcefulness of independent filmmaking. Originally this shot was conceived to be something completely different, more from Nate’s perspective. However what we wanted to do was getting really difficult and time consuming to stage out and required a lot of VFX. So in a brainstorming session the shot that we ended up putting in the film, just popped into my mind as I was problem solving. The whole team thought it was not only the perfect solution, but a better shot then we were originally planning, so we went with it.

Actually shooting it didn’t take much time at all. Deven Byers, Alex Moran and Bryan Hwang, our producers run a great set and the cinematographer Connor O’Brien our AD Gareth Dunnet work fast and flawlessly. The biggest issues were – don’t break the incredibly fragile camera or get blood on the ridiculously expensive lens. I think we shot it four times. It only took like 30 minutes to knock out. All of them look pretty awesome. The one we used was just a great punctuation to the flow of the scene.

BW: You’ve got a group with a nerdy cancer stricken hero, a psychotic party clown, and a love interest and her cousin, can you share another character that might show up down the line?

MC: Yeah one of my favorite things to write are characters that are all a little off in some way, but still feel organic to the world. There are a few I have planned for the long form version of Super Zero. It’s hard to just name someone without context, but there’s an old woman who was a fortune teller/psychic before the apocalypse happened that the run into along the way.

BW: And finally, something I ask everyone I talk to for my site, what’s your favorite superhero movie?

MC:My all-time favorite superhero movie is the original Richard Donner Superman with Christopher Reeve. That was like the first superhero film that went from the theaters and was on home video/cable and I saw it a million times growing up. That got me into the whole world of superheroes and comics. I mean what little kid doesn’t want to fly and be the strongest guy on Earth.

Even though I didn’t watch it that many times when I was younger, Christopher Reeve will probably always be my Superman, it’s hard to top his performance. I enjoyed Super Zero quite a bit and I look forward to seeing the rest of the story, whether it’s as a webseries, or something with a bigger budget. Thanks again for taking the time to talk with me! Until next time, this has been Bubbawheat for Flights, Tights, and Movie Nights.