It feels good to finally be getting back into a somewhat regular schedule over here at my home for movies since spending so much time at my second home for television over at Channel: Superhero. I think it helps that I’ve decided to make this month animation month which tend to offer up much shorter movies than the live action versions. I have also been thinking about women led superhero movies so I thought it was a perfect fit to take a look at this film that you wouldn’t even know by looking at the cover art or the title was about a young woman who becomes a superhero. It was one of a brief series of films for original characters including this film, the Condor, and the live-action Lightspeed. Mosaic is about a shapeshifting race of people who evolved from chameleons and have remained hidden within the population, and a teenage girl named Maggie comes in contact with one of their runestones and is imbued with their powers. It generally feels like an 80’s or 90’s style low-to-moderate budget animation with more action than story, but it was a fun little adventure and happens to be free to watch on Hulu, so there’s that. 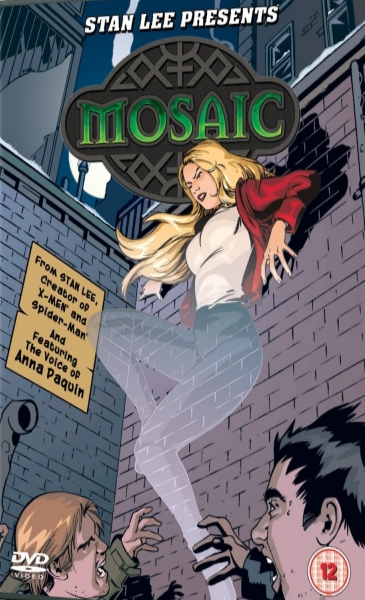 Before we find out too much about the Chameliel we’re introduced to the villain and Maggie’s father. He’s an Interpol agent with a similar preoccupation for the supernatural as Fox Mulder. He even comes with his own Agent Newell who we meet later, though she’s not quite as much of a skeptic. Maggie’s still in high school or possibly college and is training to become an actress. Not only that, but she is apparently already a method actress as she mentions how she has learned fencing, horseback riding, and a variety of other skills in her efforts to further get into the roles she has taken. It’s actually a well done bit of exposition that helps explain how she transitions into her soon-to-be role as a shapeshifting superhero once the random accident happens where lightning hits this ancient runestone and gives Maggie the powers of the Chameliel. And just like that she gains the ability to mimic anyone that she touches, and shortly thereafter anyone that she looks at with her super-DNA vision. She also has invisibility camouflage which extends to her clothes, she can climb walls, and to top things off has super strength. Because, why not? 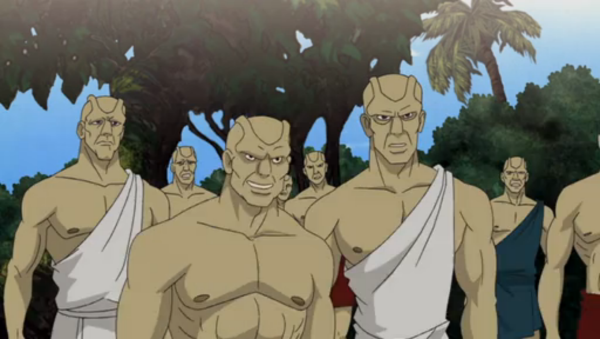 the ancient Chameliels, apparently from Pompeii.

One thing that is nice about this film is that it skims over the typical origin story learning curve. Since Maggie is an actress, she takes to her powers quite naturally. The one downside was that the movie would often quite nicely show a prime example of how Maggie’s powers work like when they show her eyes flash and suddenly every animal has a middle school model of a DNA strand glowing down their middle, then she changes to look just like who or what she was looking at. But directly after showing this, Maggie would stop and give a completely unnecessary exposition speech to herself aka the audience that literally explained what they just did. The film might be intended for younger audiences, but it wasn’t intended for mentally challenged younger audiences. But Maggie isn’t the only hero of this story, there’s also a single Chameliel who goes by Mosaic and is there to give all the exposition about the chameleon people. And honestly, this is something that is rather bothersome. While this is a superhero movie with a female lead, there’s no way of knowing this by looking at the cover art which is just the name of the film and a Celtic knot design. Not only that, but the name of the movie is in honor of the male hero rather than the female hero. She doesn’t even get to have her own hero name until the very end of the film where she briefly mentions that she will use Mosaic’s name to honor his sacrifice. Yes, he has a typical heroic ending where he falls to his death while taking the villain with him. It’s just frustrating.

The villain and his plot is a fairly typical Saturday morning cartoon plot, or as it had been described to me at one point a very silver age story. The villain who is a Chameliel named Mannequin, or Manikin as it’s spelled in the credits is collecting these magic rune stones which have been scattered across the globe. Once he collects them all, he will be able to gain the power to not only change his own shape, but he will be able to change the matter around him to whatever he wishes. The problem lies in the explanation, or lack thereof. He is tracking down these stones as though they had been purposely hidden, but in the backstory it’s revealed that their home was destroyed by a natural disaster which would have scattered the stones randomly and with no way to specifically track them down. It’s a servicable plot that is an excuse to travel the world to various locations in order to give it a more visually interesting look. 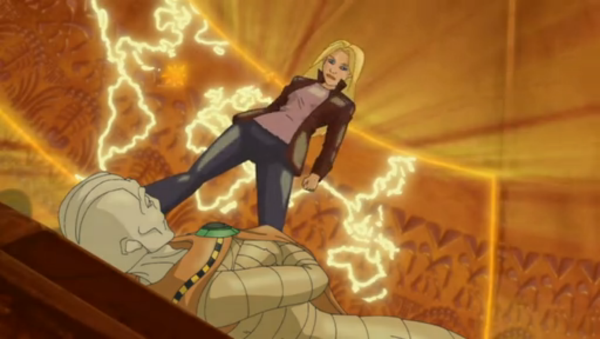 As far as the actual look and feel of the film, it looks like a typical Saturday morning cartoon from the 90’s. There’s not really anything that stands out, and that’s a shame as it did come out in 2007. On the flipside, it’s still head and shoulders above some of the cheap animation of the 80’s. It’s just incredibly average. The voice acting is also right on par with that. Anna Paquin lends her voice to the lead role of Maggie and does alright, though there are several moments that feel very awkward and stiff. The rest of the cast is filled out with more traditional voice actors including Maggie’s best friend who has a secret crush on her played by the voice of the original Leonardo. I will say that this ranks as one of the best female-led superhero movies, but that is a very low bar to clear. When compared to the rest of the animated superhero fare, it’s average to slightly above average at best. Until next time, this has been Bubbawheat for Flights, Tights, and Movie Nights.