As things continue to slow down here despite my repeated assurances of getting back on track I have managed to watch another comic book film. I had seen this film when I was younger alongside several of John Hughes’ 80’s classics, I also became a fan of the Tales From the Crypt series several years later, and I also realized that there were several different variations of the Tales From the Crypt comic book including “Weird Science”, but I never made the connection that this was inspired by one of those EC comics until recently. I even remember watching the spin-off TV series for a while with Vanessa Angel replacing Kelly LeBrock. I do remember it being one of those early 80’s movies where computers can basically do anything even though 30 years later they’re still mostly just used for looking at cat pictures and writing about movies. While it was a fun nostalgia trip, I can say that it didn’t really hold up as being that impressive of a movie outside of Kelly LeBrock’s 80’s hotness.

In case you might not be familiar with this John Hughes classic, a couple of nerds create a magic woman named Lisa with their computer, some random government computer, and a Barbie doll that looks suspiciously like Kelly LeBrock. She has the ability to give them new clothes, money, new cars, and the attention of a few hundred of their fellow classmates while essentially being their property. But at the same time, she does care for them and wants to see them grow beyond needing her help. While she initially appears to be some sort of sex slave, she grows to become more of a big sister or hot mentor. There’s a scene early on where she more or less teaches Wyatt how to kiss, and she also plays at being arm candy for one or the other of the boys during several points in the film.

While at first glance, the film appears to be somewhat of a coming-of-age film about the two teens Gary and Wyatt, there doesn’t seem to be any real growth to the characters over the course of the film aside from a slight confidence boost. When Lisa appears, they have everything handed to them on a silver platter with the sole purpose of getting the two hot girls of the school to be their girlfriends even though they are already dating two other guys. It just so happens that those two guys are also bullies and one of them is Robert Downey Jr. The two girls don’t have much in the way of personality aside from a couple brief moments where they reveal they aren’t too happy with their current situation so that the audience feels better about rooting for them to switch to the heroes of the film. Even the self-confidence boosting moment is more of a practice in acting during one of the climactic moments when several motorcycle thugs burst into the house while Lisa tries to convince them to man-up and throw them out. But they continue to act like chickens until the lead thug starts to say things that only Lisa would have known, so they realize it’s essentially all a ploy and play along to become the heroes. Even Wyatt’s relationship with his older brother Chet is solved by Lisa turning Chet into a disgusting little toad through no real growth at all from Wyatt.

Kelly LeBrock in her 80’s glory.

One other thing I didn’t quite understand about the film was the relationship between Gary and Wyatt. Obviously Wyatt is a rich kid, but I didn’t quite understand where Gary fit in. They are both in high school, but Gary apparently stays over often enough that he has his own bed in Wyatt’s room. Also, the only scene with Gary’s parents involve Lisa freaking them out over Gary “tossing off” in the bathroom when he claimed to be “combing his hair”, something that I found quite amusing as I’ve never heard it referred to as “tossing off”, and apparently his parents are big enough Anglophiles that they knew what that meant, or just ran with it.

Loosely inspired by the Weird Science comic “Made of the Future”

There is a question especially looking at this film now as to whether or not this film is essentially about the objectification of women. Throughout the film Lisa repeatedly mentions how she “belongs” to Wyatt and Gary. There’s even a mention of a possibility of a trade of Lisa for the two douchebags’ girlfriends, and while Gary and Wyatt decline the trade to give up Lisa, they do agree to try and create a woman for the two guys which implies that they will still hold up their end of the bargain and give their girlfriends over to the two nerds. 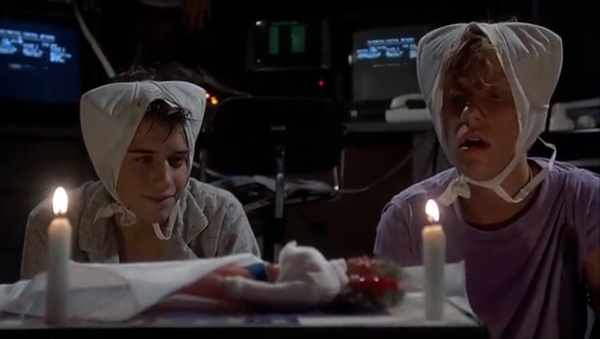 I’m not sure I want to know whose bras those are.

But what the film is really about is more of just a party movie and a male nerd fantasy, and in that respect it still works out quite well. There’s plenty of Lisa showing up in several different fantasy roles with many very 80’s fashions like the aerobic leotard, the cut off sweatshirt, and the teased hair among many others. Kelly LeBrock is the real heart and soul of this film and without her cheeky performance as Lisa, this movie wouldn’t work at all. For now, it’s still a fun nostalgia trip into 80’s computer fantasy with some very cheesy computer graphics alongside a few great practical effects like the ever so memorable toad Chet. Until next time, this has been Bubbawheat for Flights, Tights, and Movie Nights.

Leave a Reply to The Telltale Mind Cancel reply