It’s time for me to catch up on some more slightly under the radar new releases that have slipped past me in the past couple months or so. The first one that I checked out is the latest in the neverending releases from DC Animation, this brings about the return of Bruce Timm as writer who was the head of animation during the days of Batman: The Animated Series, Justice League, and is more or less credited with making DC Animation the respected studio that it has become today. He has overseen much of the DC Animated universe as executive producer, but the last movie that was written by him goes all the way back to the first with Superman/Doomsday. Gods and Monsters takes an alternate universe look at what the Justice League could have been if things had turned out very differently for a lot of people. Here, the Justice League is a small group of superhumans who are respected to a certain extent, but mostly feared by the general public as a potential menace who destroys any enemies they come across. I’ve always enjoyed alternate universe stories, and while this one was fascinating, I often felt like I was missing something with my limited knowledge of the extended DC Universe. 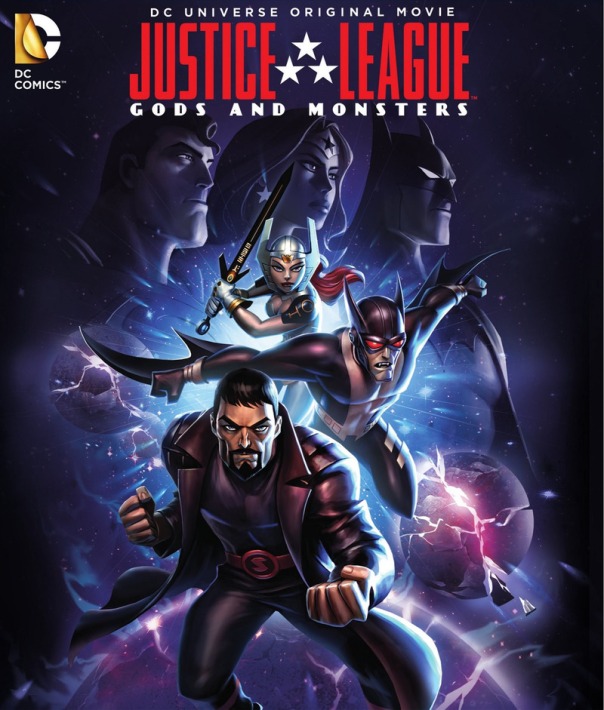 The film kicks things off right away with one of the more well known origin stories getting a wrench thrown in the works. As Jor El is ready to send the spaceship off with Lara Zor El’s genetic material which will become baby Kal El, Zod jumps in and cock blocks Jor El, placing his own genetic material in the pod before it zooms away from the exploding Krypton. From there, it jumps straight into the present day with the Justice League consisting of Zod’s son Superman, a redheaded sci-fi looking Wonder Woman, and a vampire Batman. Later on, there’s also a very quick mention of Superman’s Earth parents who were a poor, migrant couple rather than a farm couple. The pacing works well as the other two origin stories are spaced out and revealed as flashbacks during other important points in the story. Instead of Bruce Wayne becoming a high tech Batman after his parents were killed, Kirk Langstrom becomes a different type of Man-Bat that is more like Spider-Man’s Morbius than anything else. His powers explained through a variation of nanite bots and something to do with blood coagulants. Wonder Woman’s origin is the one where I was almost completely lost. I was familiar with Darkseid, but I knew nothing about New Genesis or the Highfather. They are apparently a group that was always at war with Apokolips, and here they attempt to create peace through a marriage between the Highfather’s daughter Becca and Darkseid’s son. But during the wedding, New Genesis uses the opportunity to kill Darkseid and all of his minions including the son that Becca had actually grown to care for. 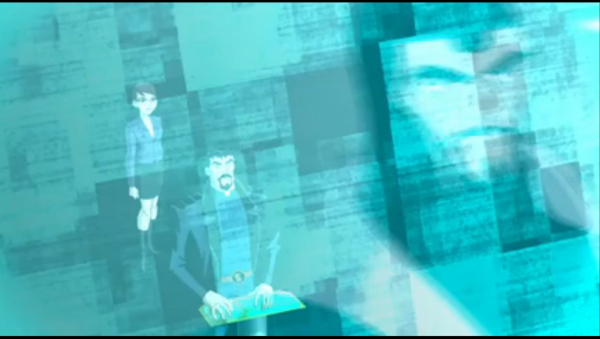 Lois and Superman watching a video of Zod.

There are obviously plenty of other minor changes and easter eggs thrown about here and there throughout the film, but they often come so quickly that it’s hard to catch unless you’re a big DC comics aficionado. Some are quick throwaways, like the name John Henry Irons on a computer screen, others are much easier to spot like a Jimmy Olsen sneaking video in a morgue with some beefy biceps and tribal styled tattoos. One other changed origin that was an interesting choice was Lex Luthor as a reclusive scientist with some type of physical condition that restricts himself to a chair a la Steven Hawking, but without the robot voice. We also get government liaison Steve Trevor, and President Amanda Waller along with a handful of others that aren’t really worth mentioning. There were even a few that aren’t clear enough to know if they’re really alternate versions of characters or just random villains, like a trio of thugs that could be a male version of Cheetah, a normal looking Solomon Grundy, and another villain with blue hair and an electricity gun. 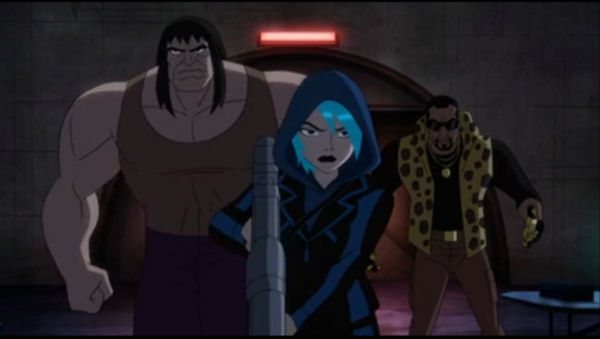 What’s your best guess on these alternate villains?

Aside from the setup for the alternate universe, there is an ongoing mysterious plot that seems to be interested in framing the Justice League for murders of notable scientists, who again are mostly DC Easter eggs. The attackers are a cross between the T-1000, the Sentinels, and Batman Beyond. The mystery element of the story worked well, with a twist that doesn’t completely come out of nowhere, but also isn’t completely obvious either. The one downside is that is has a ticking time bomb that has been used way too many times in similar superhero cinematic moments, where this device is connected at the top of this tower and when it goes off, it will infect the entire world with these nanites that will essentially make this one guy leader of the world. Also, like with many of the recent DC animated films, this is on the bloody side of a PG-13 with plenty of blades through the chest and one moment of bad guys getting squished underneath a giant door.

The biggest flaw that this film has is that there are many different themes and ideas that it begins to explore, but most of the run time is dedicated to the backstory and exploration of this alternate universe. There isn’t enough time to really explore the ideas of a Justice League that works with the government, but isn’t really a part of the government. These heroes that kill to protect, the outsiders that aren’t a part of our world, but will still fight to protect it. Those themes and ideas are still there, but it’s almost more of an afterthought than something that can be fully explored. What it does do well is create and flesh out this alternate universe in just over an hour, filled with characters that are the same, and yet very different. Superman is a little bit more arrogant, but still had a humble upbringing. Batman is more of a super powered vampire, but still has a conscience and detective skills. And Wonder Woman is the closest in personality, with her background from space gods rather than Earthbound Greek gods and a bit more tragic backstory. The fights were fun, the story and characters were solid, it just lacked a little something that often happens in the limited run time. Until next time, this has been Bubbawheat for Flights, Tights, and Movie Nights.