Most superhero movie fans are aware of the unreleased Fantastic Four movie made in the mid 90’s in order for the company to retain the rights to the characters for a few more years. That wasn’t the only unreleased comic book movie to exist, just likely one of the most well known. The Dolph Lundgren Punisher movie was also mostly unreleased as it never came out in theaters, but eventually had a home video release in the US. Gen 13 has never officially been released in the US to date for a very different reason. Gen13 was a comic book initially published by WildStorm comics which was a part of Image comics. The film was produced in part by Buena Vista Pictures, owned by Disney set for a 2000 release date on home video. By the time this film was nearly completed, WildStorm comics was struggling and was sold to DC comics which is owned by Warner Bros. As a result, this film was shelved in the US and only released in a handful of other countries through Paramount Pictures as the distribution company. Which is a bit of a shame because while I didn’t fall head over heels for this film, it’s something that could have had a niche audience and it deserves that at least. Since it was unreleased in the US, it wasn’t rated by the MPAA, but if it was I imagine it would have to have at least a couple minor cuts in order to get a PG-13 rating. There is a bit of non-sexual nudity along with plenty of blood but no gore. But as for the origin story it tells, it’s just above average.

The movie follows the story of Caitlin Fairchild who was the daughter of one of the Gen12 projects who has been found by some secret organization, but instead of merely capturing her, they trick her into joining their training facility under the guise of being a private school. But instead of a school, it’s a militaristic training facility where they are experimenting on the kids in order to make them go “gen active” aka get super powers. Caitlin becomes the first kid there to get super powers where she basically turns into a mini She-Hulk without the green skin. It also goes the extra mile and when her clothes get shredded off of her, only her thong remains. Though it is a little bit odd as she was wearing a very loose fitting shirt in the first place, but her size post-transformation doesn’t seem to be that much bigger. And when she gets a shirt from her friend Grunge who is absolutely massive, she complains that the shirt is a little too tight on her. And by the way, during her training, she becomes fast friends with Grunge, the big dude-bro eating machine who is still pretty much all muscle, and Roxy, the gravelly voice skater-type chick with the pink streaks in her hair. Once Caitlin’s powers kick in, it becomes pretty much all action as the storm trooper-like soldiers try to contain her while another military faction led by a friend of her father’s comes and turns the base into practically all out war.

Even though Buena Vista is a division of Disney, this was a far cry from a typical Disney movie and wasn’t even quite up to par with their home video animation like Lion King II, and the Buzz Lightyear of Star Command. There wasn’t anything notably bad about the animation, but it was just generally plain as if it lacked the finishing touches to make it great. The voice work, however was generally quite good. Mark Hamill voices the one-eyed leader of the compound who has telekinetic powers of his own and is unsurprisingly revealed to be Caitlin’s brother, something that neither of them knew, but was fairly obvious based on the early flashbacks. He plays it surprisingly understated, without going into the higher pitched craziness that made his Joker so iconic. John De Lancie, best known as Star Trek’s Q plays Colonel Lynch who was a friend of Caitlin’s father and is the one who brings the three friends together at the end. Alicia Witt voiced the main character, and even though I later found out that she played Zoe on the TV series Cybill who I adored when I watched it on TV, but unfortunately she did not do a very good job in this role, most of her lines were very flat. It was also a surprise to find out that Flea voiced Grunge which he gave a bit too much of a deep goon voice to.

Just a bit of nice visual design, plus Ivana in the back.

It was a bit of a surprise to see how adult this movie went at times, like the shirt-bursting scene mentioned earlier there was also a lengthy scene between Caitlin and Roxy in the showers. The scene itself was a little hard to read, while it was intended to be somewhat of a heart to heart between Caitlin and Roxy, it was difficult to see the emotions on their faces with all of the steam effects intended to cover up their bits and bobs. There was also plenty of death, even as it was blunted due to having the nameless soldiers wear fully face-covering helmets to help avoid seeing any real gore and the deaths mainly happened through explosions, bullet wounds, or being crushed by some object that completely obscures them. The one exception is the death of the helicopter pilot that the three friends capture so he can take them off of the base. They are stopped by Threshold who has gone full on villain, as noted by his fresh new black cape, and he telepathically explodes the guy’s head so that we get to see his face turn bright red before it cuts to the back of his helmet to show his face chunks splatter all over the helicopter’s windshield. It wasn’t overly gory, but it was surprising based on the level of violence this film had up to that point. Ultimately, I did enjoy the film, but it felt like it was entirely surface level. Much of it was predictable, and there was even a villain I haven’t mentioned yet, Ivana who was ranked above Threshold but never really made much of an impression outside of wearing the exact same black dress with the slit up the side for days on end. It was pretty clear how things were going to end up, but the characters never really felt like they had the chance to be fully fleshed out past their basic character traits. Like, the Fantastic Four movie there isn’t any official way to watch this, but it’s pretty easy to find if you’re looking for it. Until next time, this has been Bubbawheat for Flights, Tights, and Movie Nights. 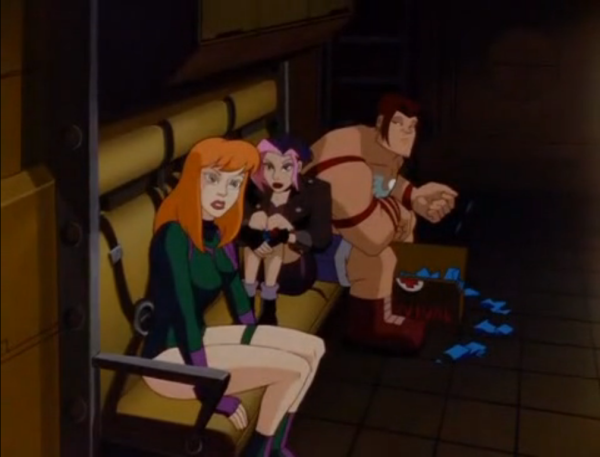