It was Sunday morning, and I hadn’t gotten a good night’s sleep. When I got up I realized that Jena had made her way into our bed at some point during the night. I’m a very heavy sleeper by the way. Considering how little my wife enjoyed Punisher: War Zone, I decided to let her out of watching this movie which by my understanding was just as bad of a movie and just watch it by myself downstairs while they slept. This was on my list of 33 of the worst movies, but when I watched it, it didn’t seem that bad to me. I mean, it wasn’t a great piece of cinema by any means, but it was a solid if fairly generic 80’s action movie. And as I looked through some of the trivia, I was surprised that this has the second highest body count of the three movies at 91 kills, War Zone comes in first at 97, and the Thomas Jane version comes in at a paltry 45. This also has the benefit (or possibly detriment) of having a few brief nude scenes, but then half of them are of Dolph Lundgren.

The basic plot of this movie isn’t anything spectacular, the Punisher’s been around for five years and has killed 125 members of the mob during that time, the power void left by all those deaths has brought plenty more mobsters to fill it, including a group of the Yakuza, or the Japanese mafia led by a woman. Aside from The Punisher’s struggle against the crime lords, there’s also the infighting between the Mafia and the Yakuza. And on top of that, just like in War Zone, the lone member of the Punisher task force has gotten a partner that’s much more determined to get to the bottom of his crimes. And The Punisher gets involved in the gang war when the children of the Crime bosses get kidnapped, so he ultimately teams up with the last remaining crime boss in town to recover the children, but in the end they all still end up dead. 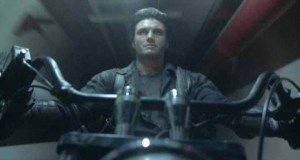 Because nothing says cool like riding a Harley around in the sewers.

I think what many people don’t like about this movie is how much The Punisher is changed from his comic book incarnation. The biggest problem is that he doesn’t have his trademark skull anywhere on him, instead he just has a leather jacket and a motorcycle. He looks more like Ghost Rider without his skull than The Punisher without his skull. And as far as The Punisher’s sense of justice, some fans think that he would never work with someone he thought was guilty even if he planned to kill him when it was all over. Also, instead of being ex-military, Frank Castle was just a regular ex-beat cop, and his old partner is now the Punisher task force, played by Louis Gossett Jr.

Personally, having no background in the comics, I thought most of these problems were easily overlooked. There was a lot of 80’s style action, although having all the kids get kidnapped and planned to be sold to the slave trade was a little over the top. The whole Yakuza angle felt a little to over top to tell the truth. All of the ninja action, and the leader being painted up in geisha makeup at the end for no reason just didn’t make any sense to me other than just making it look visually interesting. The Mafia weren’t that much more interesting either, the main guy had a plan to bring all the mob families together with a big drug shipment, but it never really amounted to anything, I couldn’t even tell which family was which, it was pretty much just the Mafia vs. the Yakuza. And in this movie, the Mafia goes down like a bunch of fools.

Granted my only knowledge of geisha comes from Memoirs of a Geisha, but I don't imagine the leader of the Yakuza would be one.

Another thing I thought stretched the believability of the movie was The Punisher’s contact. He was a comic relief drunken out of work actor who spoke mostly in rhyme. It made no sense how he was able to get all the information he had, and the parts where I suppose he was supposed to be funny just fell flat with me. He wasn’t a sympathetic character, he was just pathetic, chasing after a bottle of booze on a remote controlled semi truck after getting kicked out of a bar for bumming money from another customer. He never even explained how he got his information, he just shows up with exactly the right information that The Punisher needs to get to the bad guys.

I think the biggest thing that I noticed about this movie is that it felt like a decent, if a bit cheesy, late 70’s or early 80’s movie. But considering that it came out in 1989, it’s feels like it’s behind the times for its age. I would guess that the budget had a large part to do with it, but in the end they got what they paid for. I didn’t think Dolph Lundgren was a bad Punisher, I didn’t think he was a great one either. There was the odd fact that he never seems to use the same gun twice, and just leaves them laying all over the floor when he’s done with them. I don’t remember him wearing gloves, so I don’t see why the police other than Louis Gossett Jr. make the connection that The Punisher is Frank Castle if they’ve got his fingerprints on all the guns he leaves lying around. I would guess that it’s done for the one supposedly emotional scene after the last mobster gets killed right in front of his kid. The Punisher drops the gun and starts to walk away when the kid picks it up and points it at him, which is similar to yet another scene in War Zone, and it plays out pretty much the same way. In War Zone it was the FBI agent’s wife, in this movie it’s a kid trying to play the same amount of emotion while Dolph Lundgren keeps urging him to “do it, do it, do it”. In the end, I enjoyed it for what it was and what it was trying to be, even if it wasn’t exactly The Punisher. Until next time, this has been Bubbawheat for Flights, Tights, and Movie Nights.