AKA The Adventures of Food Boy is Not a Superhero Movie

It’s been a long while since I’ve written one of these blog posts looking at what does or doesn’t make a superhero movie as a whole. I usually err on the side of acceptance, including movies like the Spongebob Movie that only has the characters turn into superheroes for the last fifteen to twenty minutes at the end, or Birdman where the main character is an actor who used to play a superhero and is having hallucinations of that same hero, or even Electric Man where it’s mainly about comic books and one of the characters merely cosplays as the fictional comic book hero. But I finally found a movie that made me draw the line even though the poster for the film has the titular Food Boy opening his shirt in a clear homage to Superman and one of the alternate titles of the film is High School Super Hero. 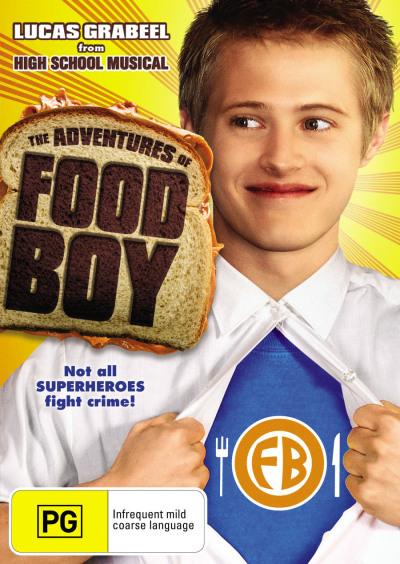 Honestly, just from the description and concept of the film I had a sneaking suspicion that there wouldn’t be any strong connection to superheroes in the film. One of the only reasons why I decided to watch it was because I was browsing through the Netflix library in search of superhero movies that I hadn’t reviewed to watch for my free month and this was one of only a dozen or so that I found. So I made the correct decision to mostly let it play in the background while I did other things like play a Minecraft card game with my daughter. It does have a few very tenuous links to superhero movies; he has the super power to create generally-ready-to-eat food out of his hands, he also has a grandmother with the same power to act as a mentor to explain this long line of food-gifted-people. But the way those are presented are just as much aligned with a fantasy movie where the main character finds out they have magic powers and come from a long line of wizards.

The film itself follows a very typical high school outcast plot line. Ezra is more or less the class clown that nobody actively dislikes (aside from the teacher since he’s always late), but only has a couple good friends. He also becomes known for being the kid who will eat anything, starting with a pile of random food piled onto a cafeteria tray where he wins a few dollars pooled from all the kids at the table by eating it all without puking. He pulls a few more stunts as he decides to run for class president against the resident pseudo-jock who has been the president two years running and is always seen holding a football but is never seen actually playing football. There’s also the plain Jane girl who likes him but he doesn’t see it, and the popular girl who likes him when he starts becoming popular with his food-related “magic tricks”.

But as far as being a superhero, there’s not really any of that included in this film. There’s a slight costume at the very end as the plain Jane gives him the shirt seen in the poster proclaiming him “Food Boy”. There’s also a slight villain with the class president, though they end the movie as friends. There’s even a bit of moral decision as he learns that he can basically forsake his power to become normal, but if he accepts it he has to use his power to do something to further the state of cuisine as a cook or something similar. And again, some of these tropes feel more akin to a magical destiny rather than a superheroic destiny. But for whatever reason, the filmmakers decided to hitch their marketing towards the superhero wagon rather than the Harry Potter wagon. Just giving someone a weird super power and adding “boy” to the title of the film isn’t enough to make it something I consider a superhero movie, there has to be more than that. So no, not everything with “super” or “man” or “girl” in the title will end up on my list as a superhero movie, I do have my limits. And while I’m at it, I will include movies targeted towards kids, but not what amount to TV shows packaged in a home video package that are targeted towards preschoolers. I.E. you will never see me reviewing Dora the Explorer and her Super Babies. But anything that may be borderline, I will likely at least half-watch so I can make the final decision myself. Until next time, this has been Bubbawheat for Flights, Tights, and Movie Nights.