I really do love Twitter, something that I have stopped doing for a while is scouring the internet for possible superhero movie titles that I may have missed. Instead, until I run out of titles to review I merely sit back and keep an eye out for any that might cross my path, which just so happened with this film. I noticed a retweet from one of the producers by Lloyd Kaufman so I reached out to him to request a screener knowing literally nothing about the film aside from its title. After watching the film it made complete sense that Kaufman RT’d it for a couple reasons, one was that he made a cameo in the film, and second because it has a very Troma-esque feel to it. Blood and nudity abound alongside low budget effects, questionable acting skills, and a very tongue in cheek humor about itself. And just like the best Troma films, it all combined to make a very hilariously entertaining film. 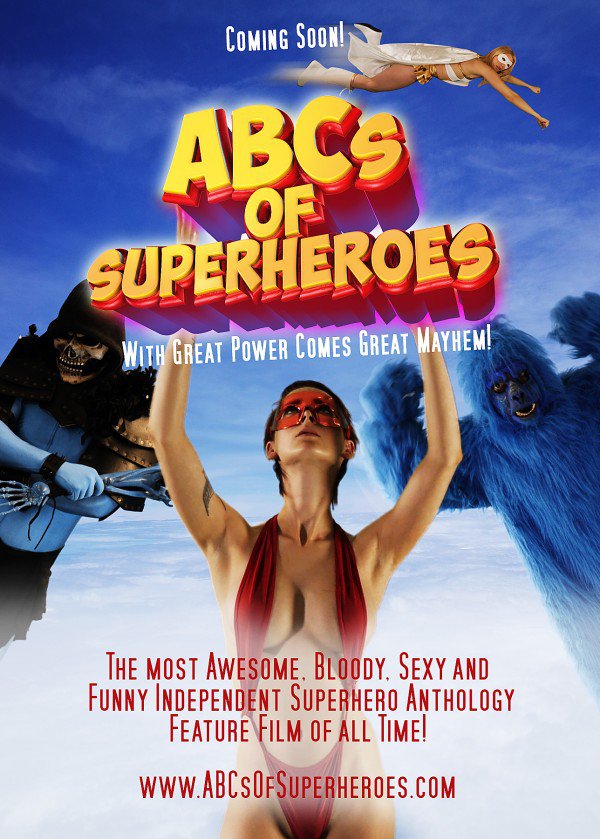 Even if you haven’t seen the ABC’s of Death, the concept is fairly self-explanatory. The film goes through the entire alphabet and has a short dedicated to that letter, and occasionally they will combine two letters for a single short. There is also a wraparound story to set up the concept, and several of the characters make appearances in later segments. While there is some variation to each of the different shorts, they all had a very similar style and tone which makes sense as there was a single writer/director pair rather than 26 separate writer/directors. One of the more unusual things about this film was that it was filmed in Germany with many German (and likely other European non-native English speakers) actors, but it was almost entirely in English. The accents were distracting in a few places, but it actually added to the almost otherworldly quality of the humor. It’s also worth noting that besides Lloyd Kaufman’s cameo, there were also cameos from Uwe Boll and Bai Ling.

It’s always difficult to discuss an anthology film like this, especially one with so many segments, over twenty in this case. The wraparound segment was actually done quite well as it was simply a young girl who picked up a comic while her loudmouth mother was shopping. It’s actually nice to see that it was a young girl rather than a young boy, though any feminism cred that might give it could easily be quashed by the sheer amounts of gratuitous nudity. In fact, there are even a few moments where the film itself comments on how gratuitous the nudity is when they have a promo for the next episode of that particular segment and even the narrator asks “Why is she naked?” The girl pops up occasionally between segments in some great ultra-quick moments of meta humor including one where she cuts short the segment for “Orgasmic Octopus” because THAT one was too weird for her. 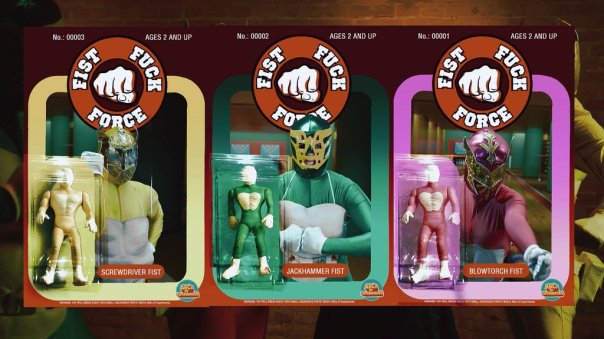 Product placement after the Fist Fuck Force saves the president’s daughter from ninjas who she didn’t want to be saved from.

Weird and bizarre are the two most fitting words to describe nearly all of the segments. Just to go into a few details completely out of context, and since these are all shorts most are presented just as much out of context. During one segment, it follows Popular Girl who has a giant pixelated penis dangling past her dress, and by giant I mean that it’s nearly as large as one of her legs. There is another woman dangling off the edge of the roof that everyone is on, including a news reporter and a right wing Christian leader calling her an abomination. Popular girl saves the dangling woman, who also happens to be the Christian leader’s daughter, by getting her to grab onto her penis. Safely back on the roof, the daughter gets hit by a giant metal sphere and smashed. Out of the sphere comes Jesus: Space Missionary who was introduced in an earlier segment and is also played by a bald Black man. By request of the Christian leader, Jesus resurrects the daughter, but she is still a squished pile of goo, he then turns to Popular Girl who is now wearing a nun’s habit and requests to be his wife. And all of this happens in the span of only two minutes, and it’s not the weirdest thing that happens in this film. There’s also a great segment near the beginning that essentially shows Skeletor and He-Man battling each other, under different names of course. Skeletor gets zapped into the real world where he saves a woman by killing her attacker and unwittingly becomes hailed as a hero.

The sitcom-esque opening for Nonster before it goes way dark.

There are quite a few different genre parodies throughout the letters. Besides the He-Man reference, there’s the sci-fi superhero with Jesus: Space Missionary, the Vampirella inspired Electric Eel girl, an Alf inspired sitcom premise with Nonster, and the obligatory X-Men knockoff Zee-Men among plenty of others. There are even shots fired at hipster Instagram users and office douchebags. If there was one complaint against this film, it would be that their definition of “superhero” is pretty broad, but it covers a lot of ground through all 26 letters. It’s also refreshing to see superheroes taken into the schlock horror genre outside of the Toxic Avenger. I laughed a great deal while watching this movie even as my wife would often look on in baffled and/or disgusted horror, especially when it came to the Menstro Squad that ends with the wraparound girl trying to ask her mother what “menstruation” is. There are plenty of great moments in the film and it goes by at a pretty brisk pace, if something doesn’t catch your fancy it won’t be long before you get to see Hitler’s brain become a living robot made up of random household items like a TV and an electric carving knife. I believe this film is still currently making its rounds on the festival circuit, but if it ever finds its way to online distribution do yourself a favor and check it out! Until next time, this has been Bubbawheat for Flights, Tights, and Movie Nights.