Throughout the month of June I thought it would be a great time to catch up on some of the more obscure and cult superhero films out there. But instead of just randomly picking a few, I decided to reach out to some of my other blogger friends who blog on plenty of other cult films on their own and ask them for their recommendations. So starting off with this film today and over the next four weeks I’ll be tackling these cult superhero films. Some are older, all of them are foreign and it should be a lot of fun. And kicking it off out of the gate is Ryan C from Trash Film Guru with his choice best known as Turkish Superman. 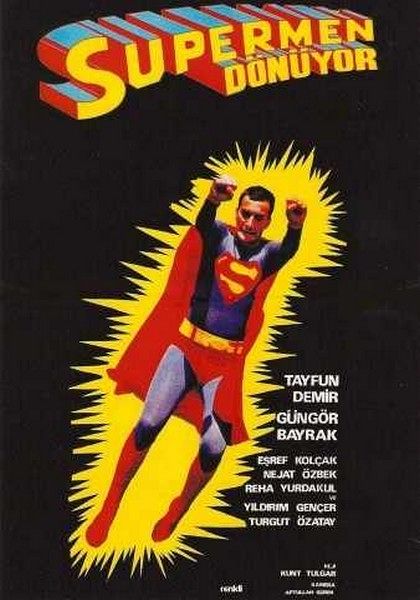 “Hi, I’m Ryan C., aka the trashfilmguru. Over on my blog I concentrate mainly on straight-to-video horror, comics, exploitation and grindhouse films, superhero flicks and — oh, heck, anything else I feel like writing about. I chose the film “Turkish Superman” for our good friend Bubba simply because it has to be seen to be believed — and everyone should see it at least once! If you want to check my stuff out, I’m over at trashfilmguru.wordpress.com. Thank you!”

For my own part, I was vaguely aware that there was a handful of foreign Superman knock-offs that came out right around the same time as Richard Donner’s Superman movie but I hadn’t seen any of them yet. I was basically expecting the worst and for the most part I got it, but there were a few tidbits of ambition mixed in with what practically amounts to a fan film with low production values and straight up stolen music cues taken from not only the US Superman movie, but also James Bond. There were a few laughably bad special effects, but there also very few actual special effects moments in the film. It’s generally a straightforward origin story for Superman only it takes random bits and pieces and finished it out with whatever the hell else it wants.

Essentially, this film follows the Superman origin story, only instead of Clark Kent his alter ego’s name is Tayfun which also happens to be the name of the actor who plays him. He tells his parents that he wants to go out into the world and become a journalist and in return, they tell him about his real heritage. They found him in a rocket-machine with a Krypton Stone next to him which they still kept. There’s an amazing packing scene, if only for the incredibly action-packed score while he is visibly just simply packing before he heads out to a random cave to meet his birth father Jor-El. It’s also interesting how they mix up their DC metaphors as Jor-El tells him about his powers he goes through the acronym of Shazam. It immediately cuts to him working for a newspaper which looks like it was actually just somebody’s house with a typewriter in it. There’s a version of Lois and another coworker who isn’t quite their version of Jimmy Olsen but not quite as antagonistic as Lombard. The villain of the film isn’t quite a Lex Luthor type, but he is an inventor who has created this ray, powered by Krypton Stone that will turn anything into gold. How he created this device without actually having a Krypton Stone, no one knows. But he does work at the museum that houses another Krypton Stone and is run by not-Lois’s father, which gives him a perfect excuse to continually try to kidnap her. 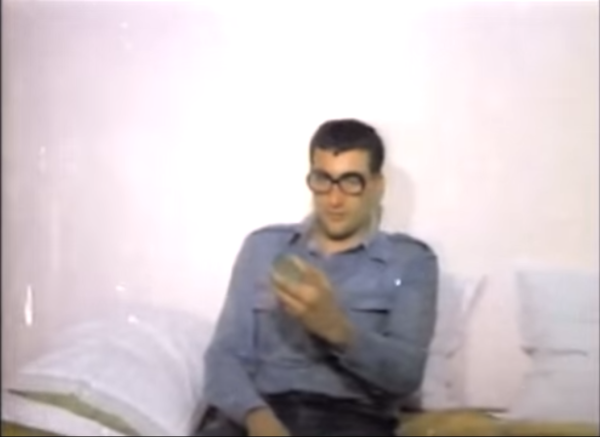 For Tayfun’s part, he actually plays the lead role very well. Similarly to Christopher Reeve, he plays the two roles very differently with a distinct nerdiness, hunch, and different tone to his voice. So much so that there is one scene where he practices what he would say to not-Lois if he were to tell her his secret, and she rushes over to his room because she thinks Superman is there. And while he doesn’t have many special effect-laden scenes as Superman, he merely doesn’t react to the blanks they shoot or punches they throw at him. He also gets to toss quite a few super-punches. The only bit of special effects that they do use are the flying scenes which are quite amusing as they alternatively cut between a Superman doll on a string in front of rear projection and a close up of Tayfun where you can only see from his face to the middle of his chest, also in front of rear projection. It’s never not funny whenever it comes on screen. The rest of the film plays out more or less how you might expect. Not-Lois gets captured a few times before having to be rescued by Superman, and near the end Tayfun does have a nice moment where he gets ambushed as Tayfun so he has to pretend to get knocked out. But once the villains leave the two of them alone, he finally reveals his identity to not-Lois to save the day. What’s most notable about the film aside from Tayfun’s performance is honestly the music. Even though it’s extremely distorted due to a combination of age and low quality to begin with, the many moments they used John Williams score gives it that extra edge and feels that much more majestic. Though there were many scenes that bizarrely used a disjointed score like the action packing scene at the beginning of the movie where they have music whose pace completely does not fit what’s actually happening on screen. And even though it’s a mere 63 minutes, the overall pacing of the film makes it feel quite a bit longer. For every few minutes of cheesy fun, there’s long stretches of annoying typing sound effects at the newspaper “office”. But overall it was rather entertaining to watch and easily found on YouTube. Thanks again to Ryan C for choosing it for me. Until next time, this has been Bubbawheat for Flights, Tights, and Movie Nights.