Going full on into animation month here as I have decided to jump back and forth between animation geared for adults and those geared for kids. After checking out the latest kid’s Lego Justice League film I decided to check out this Spanish animated drama about an old folk’s home. And even though the original language track is often preferred by cinephiles, when I saw that Martin Sheen was in the English voice cast I decided to watch the English dub. And while I didn’t really know anything about this film aside from a couple recommendations and a quick mention of Alzheimer’s, I was surprised how much I loved this film. It alternates between making you laugh and making you cry in a heartbeat, but I wouldn’t have it any other way.

Wrinkles centers on Emilio, an elderly man who is in the early stages of Alzheimer’s and has gotten to the point where his son and his son’s family are no longer able to cope with his bouts of not realizing what’s going on. So they place him in a home for the elderly where he becomes roommates with a friendly con-artist named Miguel who shows him the ropes after getting a 10 from him that he claimed he was collecting for the home. Miguel essentially takes Emilio under his wing, but there’s also an underlying sense that he needs someone else there who can appreciate his antics like sending a woman off in the wrong direction towards the telephone to watch as she soon forgets where she’s going. 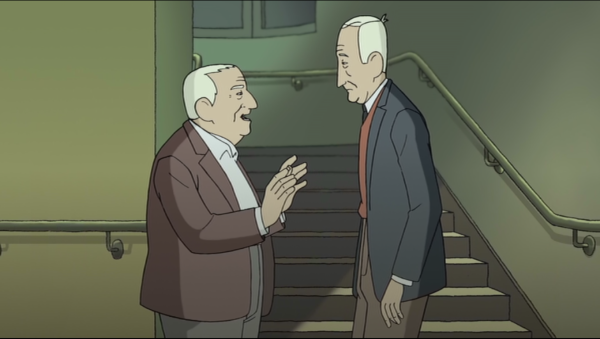 What this film does quite expertly is how it turns from showcasing the humorous nature of these situations and conditions to the sad reality of them and it does so on a dime. One moment you’re laughing along with Miguel as this woman looks back and forth between two doors on the opposite side of this hallway, but it lingers just long enough for it to sink in and make you recognize the loniness of this woman who wants to call her family who doesn’t visit nearly often enough. The home is filled with these colorful characters whose mental ailments are presented as being quirky, like the goofy looking old man who merely repeats the last thing someone says, or the old woman who sits by her window fantasizing that she’s on the Orient Express. And the film itself indulges in those fantasies, showing us what they see through their mind’s eye where we get to see this young woman on a train with a cigarette in a long holder. Or when Emilio himself sees his young wife and son during their visit to the beach via a photo on his nightstand. 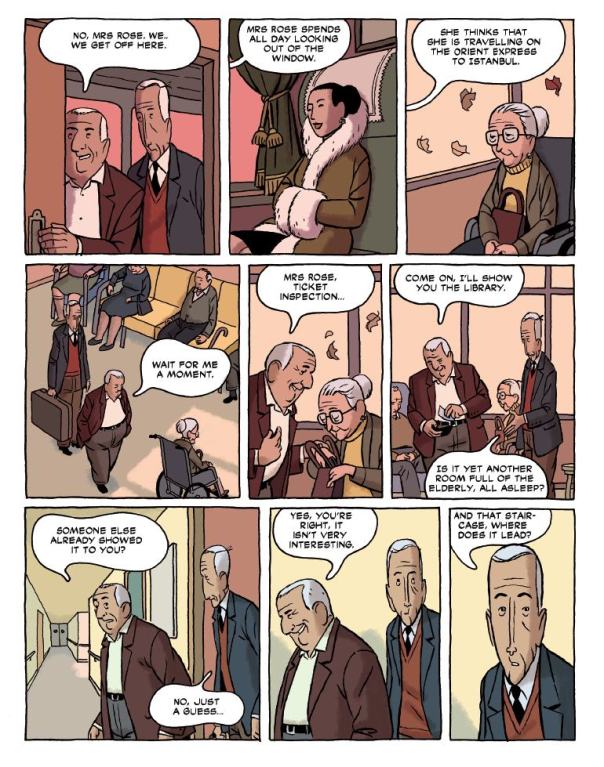 Very similar designs are used in the movie, only we also see Emilio and Miguel as conductors.

But what really makes this film stand out is the progression between Emilio and Miguel’s friendship across the film. During their introduction, Miguel sees Emilio as another mark as he cons a ten out of him. And afterward, he’s mainly seen as an audience for his pranks and cons, someone else who can be in on the joke. But over time it develops into more than that until we get the moment where Miguel spends his entire stash of money he’s conned over the years to get a convertible so they can have a night out on the town, only it’s ended abruptly because out of the three of them, only Emilio has ever driven but his condition gets the better of him. And in another moment of humor followed quickly by shock, when asked if he’s driving on the wrong side of the road, he decides that he should get out to check. It ends on a sweetly sad note with a touch of Groundhog’s Day as Miguel finally rights some of his previous wrongs before realizing how much he really has grown to care for Emilio.

While it’s tough to judge how a film presents a disease like Alzheimer’s if you’re someone who doesn’t have any first hand experience with it, the film is almost always shown from Emilio’s perspective where you can see some of the ways that the disease messes with your mind. One of the most interesting scenes is during gym, which also has one of the best moments of humor with the attractive female nurse followed by this poignant reminder of this disease slowly and silently eating away at Emilio. When they are passing the ball around to each other as exercise, without warning Emilio’s brain stops understanding the word ball and instead hears a nonsense word lob and can’t parse exactly what’s happening until later on when he looks back on it. We also get to see its effects in other ways, like when he starts to wear his sweater over the top of his jacket, or when he doesn’t recognize his own grandson during the Christmas visit. But through it all, there’s a sense that Emilio is perfectly normal and there’s nothing really wrong with him, he just gets confused sometimes. And those sometimes just slowly become more frequent and more severe. He also has to spend much of his days staring at his own future in the form of Dolores and her husband who is more or less no longer there. Dolores doesn’t even have to be in the home, but she is there for her husband.

Their convertible just before their very short joy ride.

There are just so many things that this film does right, from the fantasy sequences to the humor, to the moments that grab at your heartstrings. One of the only negatives that I would give this film is the payoff to a brief running joke about one resident who secretly keeps a puppy, sold to him by Miguel of course, only Miguel has to frequently replace the puppy because it “gets lost”. And during the final scene, we find out what likely happened to those previous puppies even though this one was luckier thanks to Miguel’s Groundhog’s Day bout of kindness. On top of that, the animation itself is quite striking. It’s fluid and the style is easy to read but also in a style all its own. And while I didn’t watch the original Spanish language, Martin Sheen and George Coe both give great performances. It’s truly worth taking a look at if you’re able to find it anywhere. Until next time, this has been Bubbawheat for Flights, Tights, and Movie Nights.