I can almost see the end of this month of animated superhero and comic book movies as I tackle this French animated film that has just now gotten a full blown English dub from GKids who also did the English dub for Wrinkles which I watched earlier this month, they were also gracious enough to send me a screener. I had caught wind of this film several months ago around when it was announced that GKids would be handling the English distribution, but I was unclear as to whether or not I would consider it to be a superhero movie or not. And while it does have a kid with super powers, it doesn’t really play like any superhero movie before it, but what does push it just over the top is the very theatrical and comic book styled mobster villain named the Face. It deals with plenty of non-superhero issues and also plays with a few of the villain tropes in a fun way. It does cop out a little bit with the ending, but overall I really enjoyed this film.

The heart of the story is a young boy named Leo who is undergoing chemotherapy and has discovered that he has the ability to astral project. That is to say that his spirit can roam free across the New York City skyline while his sick body remains bedridden in the hospital. There’s also two other main characters whose stories intersect with Leo’s. Alex is a hotshot young cop with an incredibly unlucky streak and a captain who could go toe to toe with any police captain in any 80’s buddy cop movie. He also is often accompanied by his Lois Lane love interest slash partner slash investigative reporter Mary. There’s also the Dick Tracy-esque villain with a Picasso-like face named, appropriately enough, the Face. His posse is rounded out with two muscle-bound and muscle-headed goons and a tiny dog with a face only a villain could love.

The three character’s plots intersect as the Face carries out his grand plan for his computer virus to black out the entirety of New York City so he can request a ransom of a billion dollars. Detective Alex stumbles onto their hideout at the docks and gets a cargo crate dropped on him where he is left for dead. But instead of dying, he ends up with a broken leg in the same hospital as Leo. Not only that, but while he was passed out, he had his own out of body experience where he first meets phantom Leo, and when he comes to he happens to be the first person to remember seeing Leo in his phantom form. And on top of that, Leo himself has his own obsession with classic serial style detective stories and has a childlike excitement at meeting a real cop for the first time. 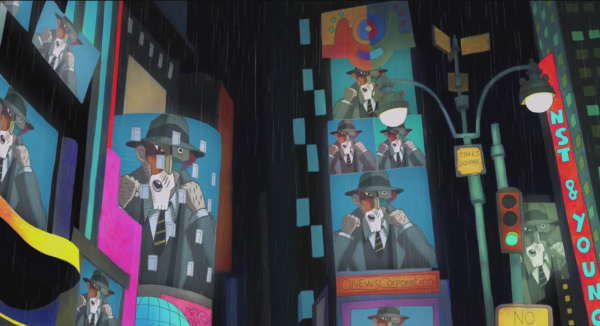 Aside from the adventure portion of the story, there’s also the human element surrounding Leo’s family. Often, when Leo is outside of his body he gets the chance to see a side of his parents and his younger sister that they purposefully hide from him in order to keep up a brave face. But in reality, they are terrified of the big C word, and it’s surprisingly a word that’s never uttered during the course of the entire movie. Instead, they just refer to him as generically being sick and undergoing treatments. But with the hair loss and weakness, it’s made abundantly clear that it’s cancer. He gets his own chance to peek into his mother breaking down just down the hall of his hospital room, or sits in on his sister, who he shared his secret ability with, cope with his absence by turning him into her imaginary friend. And when his family isn’t in the picture, there’s never a moment where Leo actually takes the time to rest. Every time that his body or the nurses tell him that it’s time to rest, he uses that as a chance to escape into his phantom form. The only time we ever get to see Leo sleep without leaving his body is at the end when his spirit fades away before he is able to return to his body.

As far as the other characters go, they fall much more into line as being a weird cross between a Batman villain, Dick Tracy and other serial era detectives, and the 80’s cop movies. Alex is this hotshot cop and our introduction to him is to see him foil a couple of incompetent robbers hold up a grocery store. He gets the drop on them with a fake tomato wound, but the gun goes off and ricochets off of a light and a gas line which sets off a building-wide explosion. His officer in charge is stereotypically fed up with him and all the paperwork he causes and is so contrary that he won’t follow up on a lead just because he doesn’t like the guy. The Face is also rather self-important and simultaneously over-competent and incompetent. He’s able to create this virus to take over all of New York City’s utilities, but he can’t manage to record a simple statement to the public without it becoming a comedy of errors. It does at least manage to subvert the genre in one playful way where the origin story behind his face is brought up several times, but it always interrupted before anything resembling a reveal.

When it gets to the actual heroics of the story it’s actually quite innovative and fresh. While in his phantom form, Leo is unable to interact with anything where his spirit is, but he’s still able to talk through his physical body. So it becomes this interesting three part adventure where Mary is the one physically trying to hunt down Face and his cronies while Leo acts as an extra set of eyes and ears and Alex plays the middleman on the phone relaying the information across.

The animation style of the film overall is very unique. It has the hand drawn feel to it, but the designs have a feel all their own that is very different from most American, Disney, or Japanese animation. It has an almost colored charcoal drawn feel to it with soft colors and almond shaped eyes that unfortunately often give the characters a cross-eyed look. The English voice acting was well done, with Vincent D’Onofrio being a highlight as the Face, and the boy playing Leo does a great job as well with both his childlike excitement as well as the more serious moments. Jared Padalecki does a decent job as Alex, but there’s nothing that really stands out in any way with his performance. Ultimately, it was an enjoyable film that in its own way takes the fight for cancer into a much more figurative realm of superheroes and villains without going all the way around to the costumed crimefighters of Marvel and DC. Phantom boy shows what it really takes to become a true superhero, selflessness. Until next time, this has been Bubbawheat for Flights, Tights, and Movie Nights.