The Batman vs Dracula

While I watched most of the run of the first incarnation of Batman: The Animated Series, I didn’t follow it with any of the later series including the one simply called The Batman. I don’t really know much about it at all, reading up on it it seems like it was intended to be a Batman for slightly younger audiences than the original series, but it found its footing a little bit better in later seasons. The first thing that struck me was the incredibly different and jarring design for the Joker. But as for looking at the movie as a whole, it didn’t have too much of a kid-friendly vibe to me. It got surprisingly dark in places, but it was mostly superficial. It’s a fun film that seems like a perfect movie to throw on for Halloween if you’re also a fan of Batman.

The music is one of the first things that makes this movie stand out, it goes very far from the Danny Elfman inspired music from the earlier animated series and has a much more Dracula-infused mood to it. It makes it all feel like a much darker story but does feel a little too far removed from Batman himself. Penguin is slightly more recognizable, with a look that feels very inspired by Batman Returns with the flippers and pointy teeth, though he’s played as a much more comical character, especially when voiced by Tom Kenny. The main reason that he’s introduced is to become the Renfield character within Gotham and with that in mind, he felt like the perfect Batman villain to fill that role. The overall story is fairly simple. Penguin learns of a heist that’s been stashed in Gotham Cemetary, while looking for it he accidentally awakens Dracula who creates an army of undead, or technically Lost Ones as they’re referred to. And of course, it’s up to Batman to save the Lost Ones and defeat Dracula once and for all. 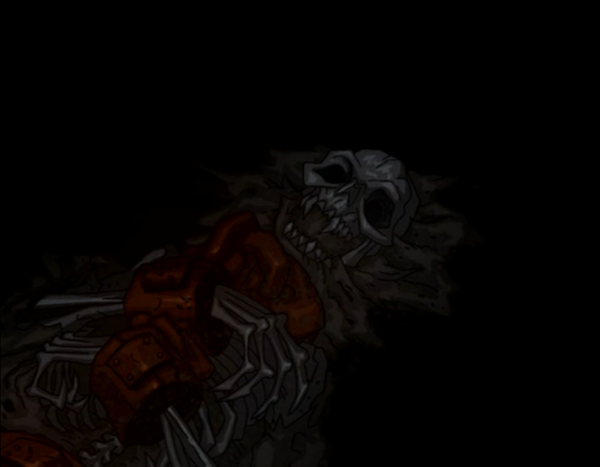 On a surface level, this story does make sense for it to be told. There are several elements of Dracula’s story that inspired the story of Batman. Or at the very least they do share a few similarities, like bats in general and only coming out at night. There’s also the dual identity of the attractive lord/billionaire with a secret identity. Even though this film does go with the incredibly common route of having Dracula go by Alucard and even has Bruce Wayne spell it out to the audience by writing it backwards on a silver platter and holding it up to a mirror. It is nice to see that when Batman and Dracula first face off against each other, it’s incredibly one-sided in Dracula’s favor. The only reason that Dracula doesn’t initially kill Batman is because at the time he was much more interested in turning him into one of his minions.

Heading back around to the Joker situation, it’s such a jarring design compared to anything that’s been done in movies or cartoons previously. Here he’s presented almost in a very animalistic or tribal way, with thick green dreadlocks that look almost like palm tree leaves and he walks around barefoot with wraps around the center of his feet. The design does work better when he becomes one of Dracula’s minions so that he does look and feel much more like an animal rather than a human in one of the creepiest looking scenes in the film where Batman faces off against him in the middle of a blood bank.

Dracula in his human form hitting on Vale.

As for the vampire aspect of the film, it takes one aspect that doesn’t always make a lot of sense. Instead of what has become the more traditional style of vampirism where there’s the victims who are just food and simply die, and there’s those special victims that are allowed to become vampires themselves, this treats it more like a disease where anyone bitten becomes a vampiric ghoul and then they also feed and make the vampirism spread to their victims. The one problem with this that it simultaneously decreases their food supply while increasing their food demand, creating an extremely unbalanced ecosystem. Not only that, but when Batman first meets up with some of the ghouls, he ends up getting them killed by an oncoming train, and they’re never mentioned again. As opposed to the dozens of others who he manages to cure, and conveniently anyone cured of their vampirism also loses any memory of their time while undead. Dracula himself is voiced quite well by Peter Stormare in the same year where he played Satan in Constantine. He has a great balance between being a threatening monster and a charming lord.

One last character who makes her animated debut was Vicky Vale, last seen in the first Tim Burton Batman movie played by Kim Bassinger, and here voiced by Tara Strong. Her character was nice to see brought to animation in this way, though she does play her reporter as essentially a Lois Lane type, only she’s played quite a bit more like a damsel in distress who keeps getting blown off by Bruce Wayne and yet continues to go after him. But it doesn’t quite feel like she’s coming back time after time because of dogged determination, but more like cluelessly hopeful. As far as Batman goes, he’s not really anything special. It’s always difficult for anyone to live up to Kevin Conroy when it comes to voice acting, but Rino Romano doesn’t do a bad job by any means. It’s just not anything that stands out in one way or another. His time in this film tends to be split fairly evenly between Batman and Bruce Wayne but there’s just not much to go on.

Again, like Batman’s performance, this film ends up not being anything too special. But at the same time, it fills its specific role well enough. Where the current DC universe has become much darker in its subject matter, this is like they were dipping their toes in darker material. But it’s not darker by way of being more mature, it’s just that it’s darker by way of the subject matter itself with vampires and ghouls forcing it to take on a more horror tone. There are a few moments of greatness, like the Joker scene in the blood bank, and also a later scene where Batman is accused of being responsible for the Lost Ones and has a moment slightly reminiscent of the Dark Knight where he is taking out the SWAT team one by one, but there’s just not much substance once you get past the novelty. Still a fun movie and an excuse to watch Batman near Halloween. Until next time, this has been Bubbawheat from Flights, Tights, and Movie Nights.