It’s time once again for another superhero podcast review where I’m checking out the last podcast that has been recommended to me. My final verdict comes down to one of three recommendations: Subscribe, Selected Episodes, or Unsubscribe. I’m always looking for new ones to check out so if there’s one that you’re a part of, or one that you listen to and I haven’t reviewed here yet, leave a comment, send me an e-mail at Bubbawheat@msn.com, or hit me up on Twitter @Bubbawheat. This is also one of the first ones where I’m going off of the minimum number of episodes listened to before reviewing with 3 plus a 4th that I’m listening to as I write this review, so before I get into things I will say that I’m not quite sure I have a full feel for this podcast but I’ll do my best to share what it’s about. 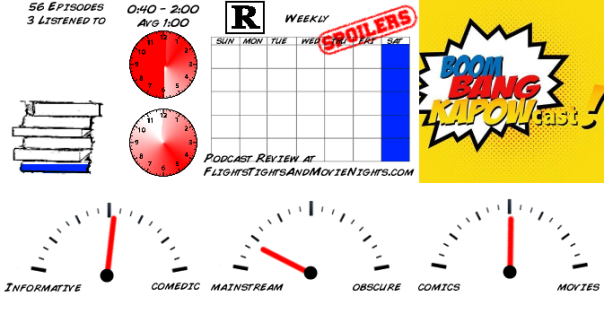 Website: Soundcloud.com/kapowcast
Episode count (as of 9-3-16): 56 + some bonus episodes
Episodes listened to: 4
Episodes recommended to me by the podcast: #55 1 Year Anniversary, #36 Harley Quinn’s Mad Love, and #13 Relatable Characters in Comics
Release schedule: Weekly, typically on Saturdays
Episode Length: 0:45 – 2:00, averaging about 1:00
Audio Quality: Clear
Language rating: R
Spoilers: Yes
Production format: A single discussion with a varying group of hosts that covers various news discussions and a topic of discussion for the episode that deals with comics and/or movies.

One of the biggest difficulties that I tend to have with these types of podcasts is that it’s difficult for me to get a feel for the hosts when there are more than two. For Kapowcast, there seems to be a rotating panel of hosts and various guest hosts and none of their online presences has any cast list for me to go off of so I can’t list off their names here like I usually do. They spend the first third or so of each episode going over various comic book and movie news that’s cropped up over the previous week before moving on to the discussion topic of the episode. The topic ranges from comics to games to movie reviews to conversational discussion topics. There is a very familiar vibe to the conversations, you can tell that most if not all of the hosts are real life friends and quite possibly are recording in the same room with each other.

Comics vs Movies vs News

Looking through the general topics across their episodes, there is a strong focus towards movies, though when listening to the episodes the news tends to be a good mix between movies and comics, with an obvious lean towards movies since there often tends to be a heavier stream of movie news versus comics news. Since every episode does spend some time covering news, that will tend to take away some of the focus on the discussion topic at hand. I’ve mentioned it before, but for my own tastes I prefer the podcasts I listen to to focus less on the news and more on the actual movie or comic or discussion topic that they’re focusing on for the episode. And while they’re still just past their first year of podcasting, the focus tends towards what’s fresh, mainstream, and in the focus of the news.

I’ve mentioned it before, but I’m less fond of news episodes because that news is only news for a short while. But the podcast itself stays around for much longer. Some of their discussion topics do sound like they could be quite interesting to listen to, and the banter between the hosts is fun to listen to even though it would probably take me at least four or five more episodes before being able to differentiate between them. There is another non-superhero related podcast that I’ve been listening to regularly, they have four hosts and about 9 episodes in there’s only one host that I can specifically point out and that’s because she’s the lone woman with three guys. But that’s all besides the point, the talk is fun and the topics they cover are great, but there’s just some unknown quantity that’s missing for me so it’s not entirely clicking for me.