← Teenage Mutant Ninja Turtles: Out of the Shadows
Antboy 3 →

It’s already come to the last theatrical superhero movie of 2016, there’s still a couple others that I have to get around to, but that will come later. This film is sparked by a seemingly small amount of controversy by most people, and yet it’s just as an important topic to talk about. I will be discussing the controversy, but I will also be looking at the film separate from the lateral diversity in the form of whitewashing. It’s also yet another origin story in the Marvel Cinematic Universe, and while there are plenty of differences to separate it from the rest of the MCU, there are still several of the same typical Marvel notes that we’ve seen across the last dozen or so movies. This is the third time Doctor Strange has graced this site in a solo movie, and almost all of my knowledge of this character comes from those two previous movies. And as always is the case on this site, there may be spoilers so be warned. 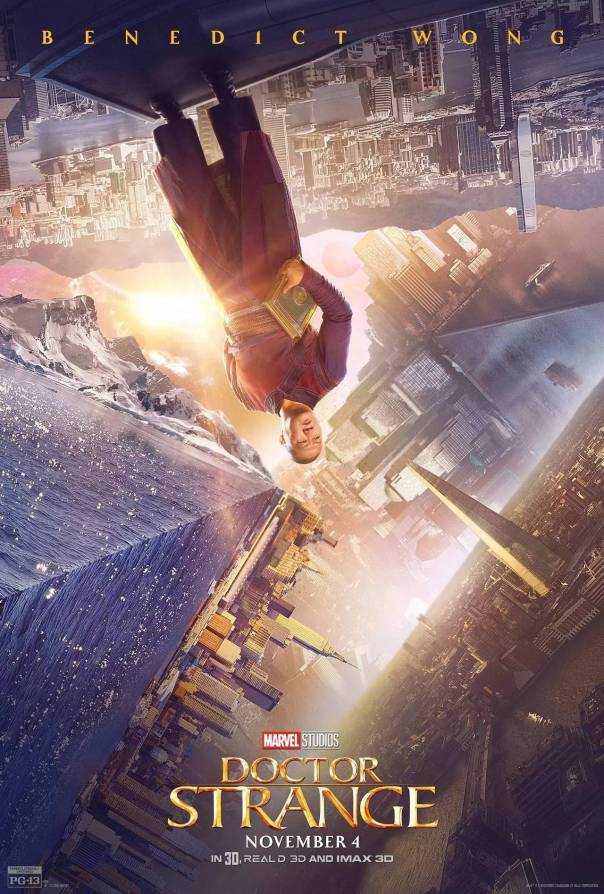 Before getting to the actual movie, it’s worth spending a little bit of time discussing the diversity problem with this movie. Specifically, how they traded one form of racism for another. While it is great that most of the major roles are played by different ethnicities, the problem comes from the fact that Doctor Strange as a whole is rooted in Asian appropriation, and yet the only Asian actor has a relatively small role. Doctor Stephen Strange is introduced to this subculture of mystics in Asia, they wear Asian style clothing, they practice martial arts, and yet the Ancient One has gone from being a Confucius stereotype to being a White woman. In an article on the Daily Beast director Scott Derrickson claims that they initially tried to work with an Asian actress, but couldn’t get the character out of the Dragon Lady stereotype. A failure in writing just isn’t a good excuse for this type of whitewashing. Not only that, but another potential Asian character, Mordo, was played by Chiwetel Ejiofor. It trades one type of diversity – including a woman and a Black man in two pivotal roles, but for something that mostly takes place in Nepal and is rooted in American views of Asian mysticism, there are barely any Asians outside of plenty of extras in the background. Even Wong, who fares much better than his comics counterpart, is handled better in the animated version of Strange’s origin back in 2007. In that movie, Wong becomes Strange’s primary mentor above the Ancient One and Mordo – who were also Asian. Wong is a fun character, but he’s given very little to do and very little screen time, but at the same time, he’s basically the only actor with Chinese descent.

But while the film suffers from a lack of representation, if you can get past that it is a fun ride. One of the primary elements that work in the best ways possible are the visuals. There are many times when the film takes place in what they refer to as the mirror universe, where they can bend space in ways similar to what we’ve seen in Inception, only pushed to the limits. Buildings split and stretch in mosaic patterns that coincide with the movie’s insistence on multiple dimensions and universes. The magic spells are formed with this electric, sparking energy, and to differentiate themselves, when the villain mystics use their magic, they look like they’re created from the air itself, with just a visual water blur. And when we do get to see some of the other dimensions, it also feels like a similar ride that Scott Lang went through in Ant-Man when he went subatomic, only with more shades of space-y stuff in it.

The characters that we do get all go through nice arcs. Benedict Cumberbatch plays the likable asshole very well in a way that feels different, but in a similar world as Tony Stark, again noting how many middle aged white guys are the main focus in the MCU. His descent into financial ruin and his acceptance into the teachings of the Ancient One thankfully take up only a small portion of the film’s two hour run time, but due to its truncation it doesn’t entirely feel like Strange had completely hit rock bottom. His learning process while training also hits a bit of an exponential curve, going from his early struggles where he can barely cast a spell to him learning the most advanced techniques in what feels like a matter of days, unlike the years of study and practice that the Ancient One implies. For Tilda Swinton’s part, she does handle the role well, giving the Ancient One a mix of a calm and collected all-knowing figure that can kick some ass and still has a sense of humor. Meanwhile Ejiofor’s Mordo works effectively in a similar role to Sinestro as the hero that will eventually turn traitor, though in this film that doesn’t happen until the very end, and when it does, it makes perfect sense the way that it’s explained. He doesn’t ever feel like a villain during the course of the film except for a subtle hint early on by the Ancient One when he discusses his inner demons, but when he realizes that something that he has believed in for many years wasn’t entirely what he thought it was, he feels absolutely justified for leaving.

What was really great about the film was the way it introduced time manipulation within the context of magic. As Strange gains experience and power with his magic, he discovers one of the forbidden texts and gains the power to manipulate time, to a certain extent. The way it’s set up and ultimately used works well within the context of this film. The time loop especially was both a fun scene and it also fit within the context of Doctor Strange being a doctor and finding a solution that didn’t involve killing anyone. Yes, for all intents and purposes, all the Dormammu zealots were effectively killed, but in theory they did still exist within the dark dimension. It also ended in a great way where he never actually used those time manipulation powers to either repair his watch or heal his hands. As for the villain of the film, Kaecillius played by Mads Mikkelsen, he didn’t quite fall into the trap of the typical Marvel weak villain, but he wasn’t terribly strong either. He had a great look, with the darkened and cracked eyes from the dark dimension, but his motivation was fairly mediocre. It’s essentially the same old “destroy the world” plan that seems to happen in every other superhero movie, especially within the Marvel Cinematic Universe. There’s a little bit more to it than that, but that’s what it all comes down to despite his claims of eternal life. But despite all its flaws, the performances and amazing visuals really help to carry this film, and the typical Marvel style humor is always a treat, especially the cape of levitation which felt heavily inspired by Carpet from Disney’s Aladdin. Such a fun device that was given so much character through its physical comedy and really helped explain why someone in this day and age would ever be caught dead wearing a cape in the first place. Until next time, this has been Bubbawheat for Flights, Tights, and Movie Nights.

← Teenage Mutant Ninja Turtles: Out of the Shadows
Antboy 3 →