Just a couple days ago I just happened to notice a promoted tweet about a smaller film opening this weekend called Sleight. There were a couple things that caught my interest about the tweet, one was that they used a pull quote that mentioned twisting the superhero genre. And the other was that it had a Black lead. When I looked at their Twitter feed, I also saw a pull quote that called it “Chronicle meets Iron Man” and when I watched the trailer I was interested so I decided to give it a shot. While I did enjoy the film, I thought that it didn’t come anywhere near the hype of the pull quote as it only touches on a few similarities to a typical origin story. It tosses in a few urban coming of age tropes, but the characters and the magician angle were enough to pull me in for most of the movie. 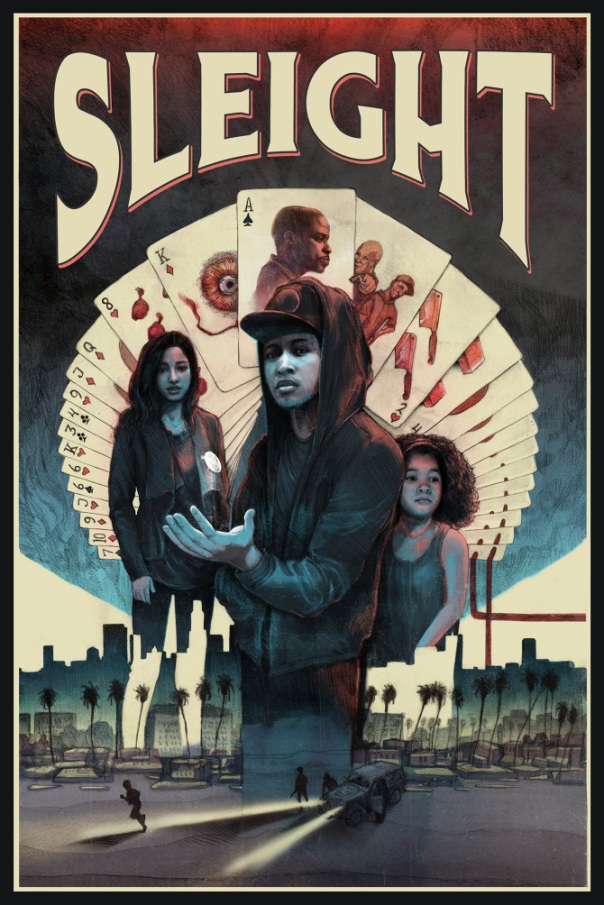 The main character of the film is Bo, he’s a young Black man living in LA who gave up a scholarship to college when his mother died and he had to support his younger sister through street magic and dealing drugs on the side. The Iron Man comparison comes in because he goes the extra mile for one of his tricks by embedding an electromagnet in his arm that’s controlled by his hand. It’s a minor element of the story that mainly just comes into play for the third act climax. The Chronicle comparison comes with some of the rest of the family drama as Bo edges towards becoming a villain before making the turn when things go too far as well as the similarity to telekinesis that the electromagnet gives him.

Where the tropes come in is his descent into the underworld of drug dealing. He works for a drug dealer named Angelo and he does a good job. We also get to see a quick moment where his sleight of hand training as a street magician works in his favor when the cops try to bust him in a drug deal, but he is able to make the drugs “disappear” and get off without a hitch. But as with many movie characters working for drug lords, he ends up getting in too deep when a rival drug dealer starts moving in on their turf and Angelo brings him along for the power play. And later on, he tests his allegiance by having Bo cut off the hand of the rival in a great scene that keeps the focus on the faces of Bo and his victim and doesn’t show the aftermath of the hand until the very end, and not in gruesome detail either. 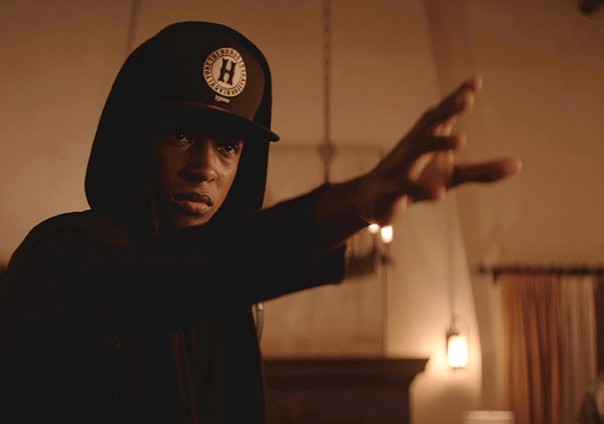 Where this film works the best is the likability of Bo. We get to spend plenty of time with him as a street magician. He can work a small crowd very well, and we get to see some great little magic tricks, both ones done for real (from the neck down, of course), and likely ones done with editing magic. We also get to see him spend time as a small-time drug dealer, selling drugs mainly to harmless white guys just looking to have some fun. This doesn’t get into the junkie underbelly of people getting high just to stave off the next wave of withdrawal, it’s the glamorization of a good kid just trying to make some extra money the only way he knows how. We also get to bring in the girlfriend with her own slightly cliched sob story of an alcoholic mother who abuses her as an excuse for her to latch onto Bo as quickly as possible.

While there are some storytelling shortcuts here and there, the cast and the score work together well to make a compelling movie. Jacob Latimore handles everything very well, from the charming street magician, to the conflicted nature of what he feels like he is being forced to do throughout the course of the movie, and the weight of being an adult at the age of about 19, give or take. Dule Hill also does a good job of switching between the charming drug supplier that you could see Bo initially working for and the frightening gang leader that has to keep his territory in line by force when he has to.

Coming into this movie expecting something of a cross between Chronicle and Iron Man was a bad idea, but it’s still an enjoyable movie regardless. The superhero origin story as it were only boils down to about 10 to 15 minutes of his powering up the electromagnet in his arm and using it to go after Angelo and his boys. The rest of the film is just focused on Bo and his life as a street magician and drug dealer who feels stuck wanting to get out but without any way to actually get himself and his sister out. Even the ending feels a little too ambiguous for a superhero movie as he takes his electromagnet trick to the next level, but it feels like he’s moving along the path to become a great magician rather than the next Iron Man. It’s still worth checking out even if it’s not quite a superhero movie. Until next time, this has been Bubbawheat for Flights, Tights, and Movie Nights.