← Spider-Man: Homecoming
Surge of Power: Revenge of the Sequel →

Still trying to catch up on some of last year’s superhero and comic book movie offerings I managed to get around to one that I didn’t know much about but I had heard good things. Even when I checked it out from the library, the librarian recommended it as a good movie. I’m a fan of Charlize Theron in general as well as action movies with female leads as there are so few of them, and this movie delivered pretty much everything that I could have expected. Especially considering that the director’s previous effort was John Wick which I have heard nothing but good things about. And in case you didn’t know, this film was based on the graphic novel The Coldest City. The film has a lot of rawness, sex, great action scenes, bright colors, and a decent 80’s vibe but while it was a fun watch, there was just something missing so that it didn’t quite become an absolute favorite of mine immediately. 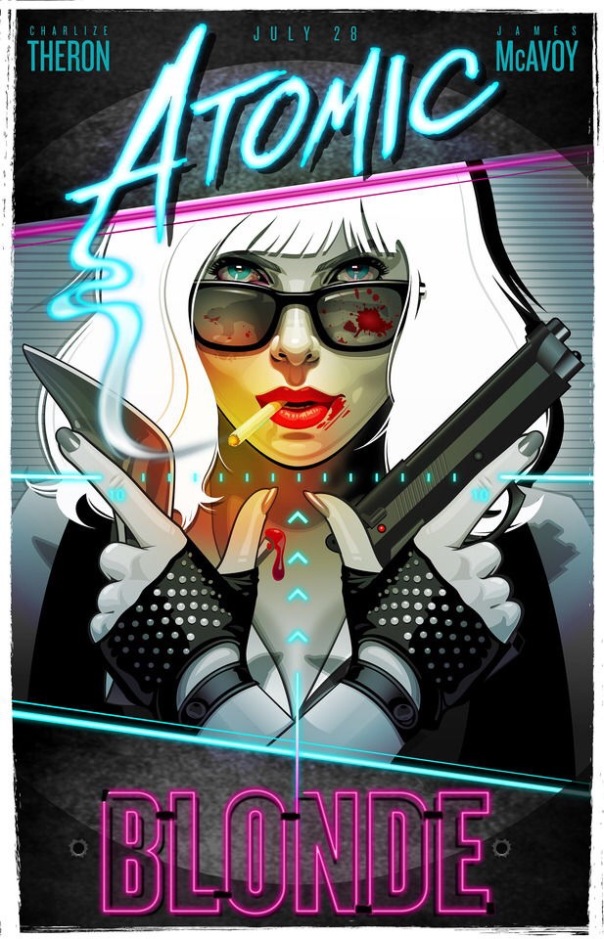 One of the more refreshing things about this film is how we’re introduced to Theron’s character. She’s completely naked, coming out of an ice bath, but she’s also covered head to toe in cuts and bruises as the aftermath of the mission that we’re about to see. Bookends like these can be hit or miss, but in this case, it works well to introduce us to a character that’s not perfect, but not ashamed of that imperfection. It’s not glorifying her body or her injuries, it’s just showing us this character where she is in her life at that moment.

It’s reflected well in the climactic showpiece action scene that’s presented in a way that looks like there are no cuts. This is a complete contrast to what has almost become the standard in superhero action scenes with quick cuts that often make it difficult to tell exactly what’s going on, but are likely easier to choreograph with the help of stunt doubles. In this scene, the action is not only easy to follow, there’s also this sense of complete and utter exhaustion that comes when someone without superhuman endurance has to cope with a deadly situation for an extended period of time. And this film captures that feeling excellently and without losing any sense of urgency or pacing.

Where the film falls down a little is the sense of the double slash triple agent. While all the actors play their parts well to where you can never be sure where anyone’s allegiances really lie, from McAvoy to Boutella to Theron herself, there’s always a question of who is working for whom. But in the end, it doesn’t really make any difference, Theron is working for Britain in Germany against the Russians and with the Americans and the French are thrown in for good measure, but none of the espionage double crosses have any weight to them. Boutella is just a sexy distraction, and while McAvoy does the best job at making you question whether he’s working with Theron or against her, the rest is all background noise that makes little difference.

All in all, the specifics of the politics surrounding the plot make little difference as it’s still a lot of fun to watch unfold and go from action setpiece to action setpiece. And it’s all set to bright neon colors and a fantastic 80’s soundtrack, aside from when it rolls out the song that everyone uses any time a movie has an excuse to cross 80’s and German with 99 Red Balloons. The look of the film is really one of the best elements. Nearly every shot is bathed in a bright, saturated color that helps give it a comic book and otherworldly feel while still making it tied to the 80’s.

In many cases, having a wraparound where one of the characters is telling the story isn’t the best method of storytelling, but it works well in this case. It adds an element of humor, and even though it removes a small element of suspense as you know fully well that Theron comes out of the situation injured but alive, it actually adds to the continuity as the action scenes create the wounds that we’ve already seen. It also allows for some comic relief and is one place where the mystery element works as what we see happen and what she relays back in the interview don’t always match up perfectly. Ultimately, there’s nothing truly groundbreaking about this film, but it’s a fun action movie that looks fantastic and has plenty of sex and violence without feeling exploitative. I wouldn’t consider it one of the best comic book films of last year, but it was a very entertaining watch and I’m disappointed that I wasn’t able to give it a shot while it was still in theaters. Until next time, this has been Bubbawheat for Flights, Tights, and Movie Nights.

← Spider-Man: Homecoming
Surge of Power: Revenge of the Sequel →