Surge of Power: Revenge of the Sequel

Surge of Power: Revenge of the Sequel 2018

An interesting thing happened the other day, I had a Facebook memory reminding me that a year ago I was contacted by an indie filmmaker who discovered my site and reached out to me to request a review for their movie. And that actually happened yet again this year. Justin Cook sent me a screener of his superhero spoof sequel, though I originally thought that the whole “Revenge of the Sequel” was part of the whole spoof concept. It also boasts being the first out gay superhero. On top of that, it’s filled with literally dozens of cameoes from superhero and sci-fi history including plenty of Star Trek actors. Not to rain on anyone’s parade, but even though most of the cameoes felt like they were pulled from various convention circuits, it was still a treat for someone like me who recognized plenty of stars from films like the 70’s motorcycle riding Captain America or the unreleased Roger Corman’s Fantastic Four. It felt like a cheesy road trip movie with a gay superhero twist that had some fun moments here and there.

One of the biggest upsides and downsides to this movie is its roots in gay culture. Surge himself is a great example of a positive gay character. He meets a nice guy during the course of the movie and has a fun little date moment halfway through. Unfortunately, there were also plenty of over the top gay stereotypes and an abundance of drag queens. Surge’s tech guy has several moments where he is distracted by a couple blonde babes wearing nothing but underwear making plenty of sexual innuendo. It often felt more like mean spirited gay stereotypes rather than positive gay culture. At least the villain Metal Master was another example of a well done gay character, especially as the film spent quite a bit of time with his parents who were simultaneously having to accept their son as not just gay, but also a supervillain. 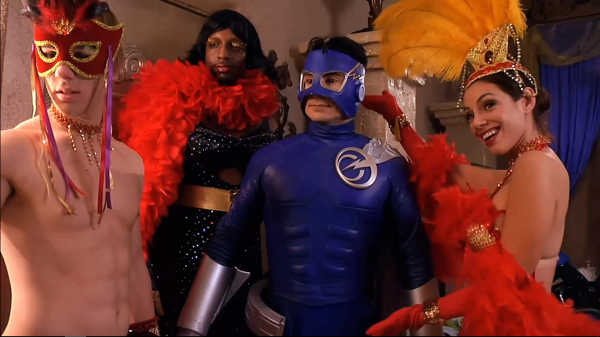 Another of this film’s biggest selling points are the cameos and they are incredibly frequent. Unfortunately, since many of them are the C and D list celebrities that were often part of cult films and TV shows, even someone who has a breadth of knowledge of these properties would have a hard time deciphering what was intended to be a cameo and what was just an amateur actor. There are some clues here and there, but you generally have to know what you’re looking for, like the Captain America shield on Reb Brown’s tie as the newscaster, or lines here and there. There’s also plenty of man-on-the-street style interview clips that list the cameo by their name and often where you would recognize them from, but again they are often more obscure and cult titles that sound like they could be fictional just as easily as real.

As far as the humor of the film, it’s sold as a cheesy throwback comedy, but for the most part it takes its camp seriously with only the occasional and literal wink to the camera for full effect. Much of the comedy is derived from the low budget nature of it all, there’s just something oddly amusing to watch Eric Roberts ham it up as a villain wearing a black robe with what looks like several felt triangles sown around the collar. The special effects work well for the budget level, they’re nothing too extraordinary but accomplish what they are intending to do. The acting overall spans a wide range. Some of the bigger cameos like Linda Blair do their best, others like the aforementioned Eric Roberts play up the camp in the best way, while many of the more amateur actors are quite obviously amateur. It makes a bit of a mixed bag to the camp factor as there are only a few actors playing it over the top, but nobody takes it to the so-bad-its-good direction.

For the most part, I did enjoy the film for what it was. It’s rare to have a gay superhero and the only other one that I can think of is from another low budget superhero comedy Real Heroes. While the representation felt a little hit and miss, the main characters were handled well. The best part was really just the total onslaught of camoes. And despite having not seen the first movie, I didn’t feel like I was missing much as they cover the basics without spending too much time overexplaining the origin story and I am looking forward to going backwards and seeing how the first movie holds up. Until next time, this has been Bubbawheat for Flights, Tights, and Movie Nights.