This is the most recent animated project from Marvel which have been very hit or miss and mainly focused on TV series lately. This almost seems like a response to DC’s Super Hero Girls only instead of making a team of super hero girls and market it directly to girls, this seems like just a generally diverse group of heroes that happen to be made up of more than half women. And while I haven’t seen much of the marketing for it, I get the impression that it is geared slightly more towards girls, but also generally gender neutral. This is my first experience with the majority of the heroes presented in here, though I have heard about several of them in passing and I was familiar with Chloe Bennet’s Quake from Agents of S.H.I.E.L.D. though I stopped watching shortly after she first got her powers. It also is an odd release strategy as this is basically the pilot movie that aired on TV and is now available on Marvel’s YouTube channel Marvel HQ. But the next two releases are 30 minutes followed by 44 minutes and are considered “TV specials”. It’s not a series, it’s not movies, the lengths are all over the place so far, but I’m curious where it’s going to go. 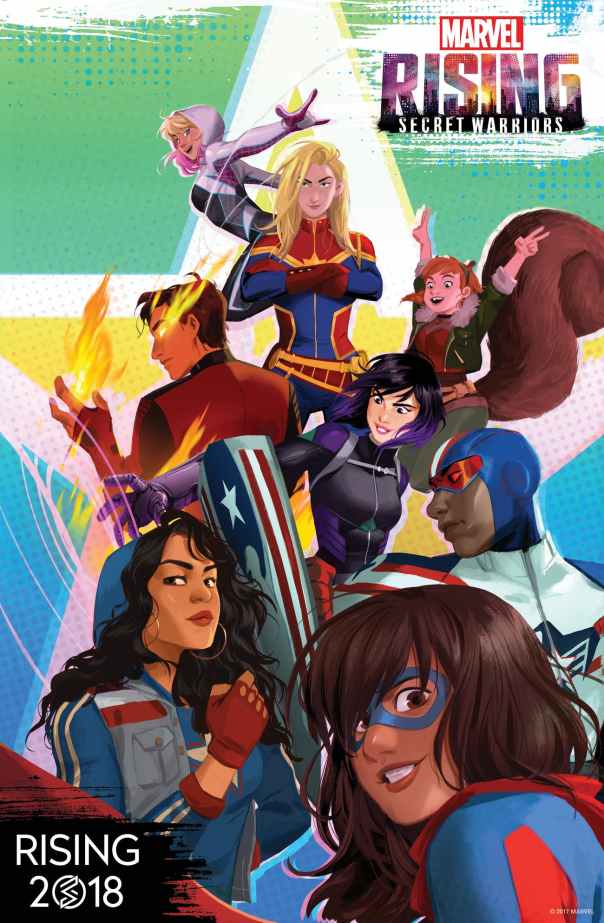 This movie is honestly one of the best ways to do diversity in a super-team. At no point does any character comment on anyone’s gender or nationality in a way that makes it seem like they are trying to be inclusive for inclusive sake. The main character more or less is Kamala Khan, also known as Ms Marvel. She’s a Muslim superhero that can stretch and grow her body like Mr. Fantastic, Elastigirl, or Plastic Man, and she can also use that ability to make herself look like someone else. Her best friend here is Squirrel Girl who has self-described “squirrel powers” which mainly include having a tail and being able to talk to squirrels among general superhuman strength and agility. The rest of the team is filled out with America Chavez who’s technically an alien from another dimension, but is presented as Hispanic. She’s basically super strong and creates star shapes with her impacts, for some reason. There’s Patriot, who’s a Black teenage Captain America with a little Iron Man mixed in, Quake from Agents of S.H.I.E.L.D. who can create shockwaves with her hands, and Dante, the token white guy who shoots fire out of his hands. 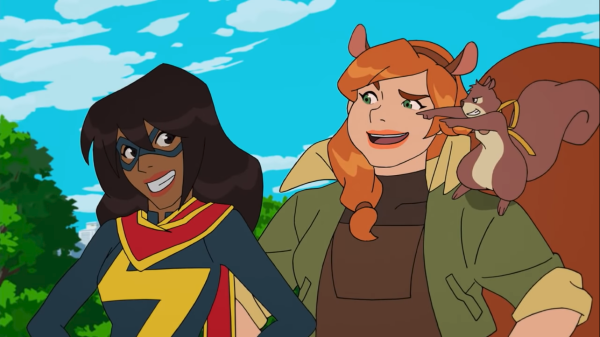 The actual plot of the movie is a fairly standard group of teen heroes get in over their heads and have to prove themselves worthy to be actual superheroes. There’s also a nice bit of expectation subversion as one of the other random teen heroes they meed ends up being the villain while the random teen villain they meet ends up being a part of their team. It’s pretty solidly grounded from the perspectives of Ms Marvel and Squirrel Girl who are best friends and basically the weirdos of their school. This isn’t a full on Sky High situation where the heroes, or technically “Inhumans” as this is basically a Marvel continuity with a recent inhuman event that created a bunch of people with super powers rather than an X-Men mutant situation. The heroes are actually capable and their powers are useful. There are elements where the teen heroes aren’t fully used to wielding their powers, especially in the case of Dante but even Ms Marvel has a moment early on where she misses a bully and accidentally crushes someone’s car.

Where this film really shines is in the perspective and personality of its heroes, especially Kamala Khan. We’re first introduced to her not through her superpowers, but as she is sneaking back into her bedroom with a costume shredded from a night of superheroics. She still has to deal with her mom, her school, and the fact that she accidentally crushed her alarm clock. She has fangirl moments over meeting Captain Marvel. But through it all, she’s the one hero who looks at the situation for what it really is. She calls out America Chavez for escalating an early situation between Dante and the eventual villain Victor. And she’s the one who realizes something is wrong with the Dante situation in the first place and doesn’t immediately label him a criminal or villain like most of the rest of the group. 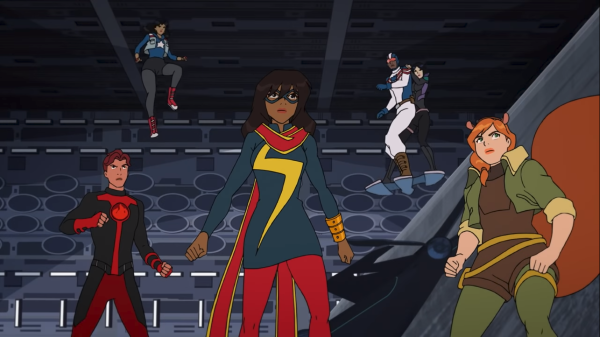 The animation itself is pretty much standard Disney television fare, there’s nothing overly spectacular, but it gets the job done and it looks pretty good in the meantime. The voice actors are an interesting mix of B-name celebrities like Booboo Stewart from the Descendents, Tyler Posey from Teen Wolf, and Chloe Bennet brought her co-star from S.H.I.E.L.D. Ming-Na Wen for the villain role. I’m fairly interested in seeing where this series goes and how it’s going to be implemented in the future, if it becomes a more regular series, or if it continues with this odd mix of specials with varying run times. Until next time, this has been Bubbawheat for Flights, Tights, and Movie Nights.