This is still just the second to last theatrical release I have to catch up on from last year. After this, there’s just Aquaman left for me which is currently out on digital so I hope to get around to it soon. When this came out, I heard a lot of mixed things about it, even those who didn’t enjoy it gave at least some credit to Tom Hardy for his performance. I generally like Venom as a concept, but I haven’t really gotten much of a feel for him past Spider-Man 3. This movie tried to take that concept and mix in a few too many genres. It feels like they wanted to go much more of a horror route, but the horror elements were very minor overall, there’s honestly more of a character drama with a really weird buddy cop comedy mixed in only it’s very much on the dark side of things where the humor is concerned. Overall, I did enjoy it, but I thought they could have taken it a bit further and made it great. Instead, it was just ok. 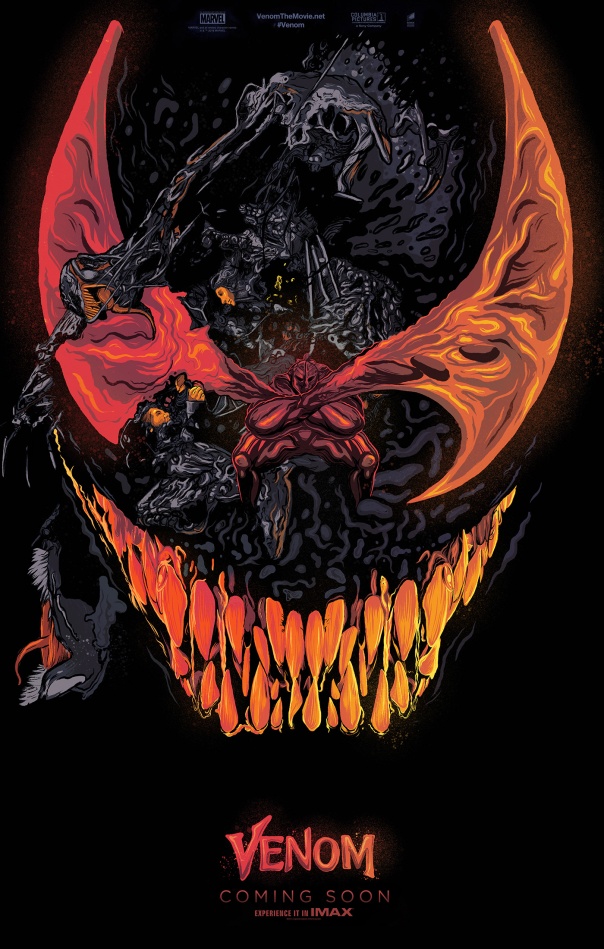 One of the biggest questions when this movie was first announced was how do they make a Venom movie that has nothing to do with Spider-Man, or alternatively: are they going to squeeze in a Spider-Man cameo? While there is a throwaway line about Eddie Brock’s time in New York, they moved the action to the other side of the country to take place in San Francisco. Although this raises a slightly different question, since Spider-Man is in the MCU and Ant-Man is also based in San Francisco, could there be a Scott Lang cameo in a future Venom movie? Regardless, the movie doesn’t delve into any previous movie continuity and instead just focuses on the characters and mythology at hand, for better or worse.

The other question is how to make a generally villainous character into the hero of the story without sacrificing what makes Venom Venom? This film’s answer is by softening the violence and aggression of the alien symbiote with dark humor. And in that respect, it actually works quite well depending on your sense of humor. It’s not enough to have a violent and gory outburst of the symbiote literally biting somebody’s head off. Instead we get Eddie Brock’s shocked reaction followed by his self admonition about how wrong it is to eat people. That’s followed up later on by his reminder not to eat policemen. This probably wouldn’t work quite as well had it not been for Tom Hardy’s committed dual performance as he voices both Eddie Brock and Venom and sells both the disgraced reporter and the outcast invading alien entity.

The best part of this film is the relationship between Eddie and Venom. It’s a bizarre buddy cop movie where Eddie is the down on his luck officer who made a few mistakes and it’s gotten him into trouble so now he’s trying to play it safe. Meanwhile, Venom is the loose cannon who shoots first and asks questions later, only he learns through Eddie to actually care about the planet and the people on it rather than use it as a feeding ground for the millions of alien brethren still out in space. It’s great as he initially is scared by the situation but over the course of the movie, grows to enjoy and even embrace it.

One of the more difficult aspects of this film is that it was seemingly designed to be more of a horror movie. The aspects are there, there’s the scary alien creature, plenty of deaths with the potential for gore, and one of the best scenes was when Venom in all his glory attacks a group of SWAT soldiers in a room full of tear gas. It was set up to be like a monster movie reveal, but it fell a little on the flat side as it went more towards an action scene instead. The initial reveal of Brock’s homeless “friend” was one of the better horror-esque elements of the movie, as was nearly everything in that building. But as soon as they left that headquarters, it devolved into more generic action beats with buddy cop and romance elements. And on top of everything else, apparently the rules for language in a PG-13 allows for a large number of “shit”s as this film had nearly a dozen.

It was also successful to transition Venom into an anti-hero by pitting him against something that Eddie is against and has a personal stake in as it’s basically a rich asshole that cost him his job and his girlfriend. It’s actually good that there is no Peter Parker in this situation because it would just muddy the waters and dilute Brock’s motivation. There’s a great moment where we get some honesty out of Venom when he admits that the reason why he likes Eddie so much is because they are both basically losers within their respective communities. But here on Earth, Venom suddenly becomes a big fish in a small pond rather than the other way around. Despite the fact that his motivation is really mostly self-centered, the fact that his actions to keep his place in the world are stopping a horrible person ends up making him a hero in the audience’s eyes.

All in all, Venom is still a bit of a mess. It’s a horror movie that doesn’t have enough horror in it, it’s a buddy cop movie where the two characters inhabit the same body, it’s kind of a Spider-Man movie without a single reference to Spider-Man, and it’s a romance where the main character screws up so badly that there’s no plausible reason for the girl to take him back especially when she’s in a new relationship with a seemingly great guy. It has so much going against it that it’s crazy that it’s still kind of a fun ride to sit through. And that credit pretty much goes straight to Tom Hardy. If you don’t like his performance, there’s not much else to like in this movie. I’m curious where they’re going to take this franchise but I hope they pick a lane and stick to it this time. Until next time, this has been Bubbawheat for Flights, Tights, and Movie Nights.