← Should I watch Chronicle?
Kick-Ass → 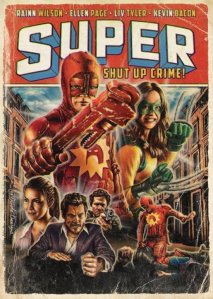 This was actually the first movie that I bought sight unseen specifically for the purposes of this blog. It helped a lot that it was only three dollars at the rental store, technically two for six along with our other choice, Black Swan. I grabbed it at the same time as I rented the first four Superman movies and I held off on watching it until I found a good place to schedule it into this blog. It’s labelled a comedy, but it’s really a pitch black comedy with a lot of violence, gore, and drama. It’s also one of a recent trend in mimicking the real life superhero movement that’s been happening in a few places around the country. At the same time, it’s kind of a deconstruction of the typical superhero movie, there’s several places where a typical hero would make one choice, yet this movie makes a completely different choice, sometimes for comedic effect, other times for a more serious tone. There’s also a subtle difference that I only just realized after watching Kick-Ass, in most movies you root for the superhero, but often in this movie you worry about the superhero. Not always just for his safety, but often for his mental well-being. 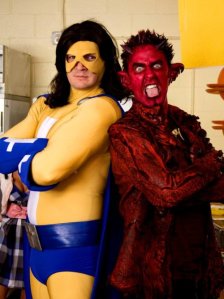 The comedy continues into the second act as Frank becomes the Crimson Bolt, weilding a pipe wrench and accosting crime wherever he sees it, including drug dealers, pedophiles, and the worst of them all, line butters. While they do play up the blood in these scenes for comedy, especially in the line butting scene, I think a pipe wrench to the head would have killed most of those people rather than just seriously injuring them. I mean, it worked for Colonel Mustard, right? In these scenes there’s often a lot of blood, but usually along with comedic overreactions. He eventually ends up staying with comic book shopgirl Libby played by Ellen Page after he gets shot in his first attempt to retrieve his wife Sarah from Kevin Bacon’s drug mansion. She’s a great character who’s hyper, loves comics, loves the idea of being a hero, and loves the idea of Frank being a hero. 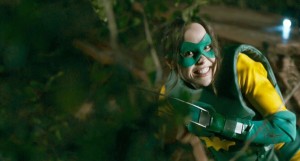 The third act is where things started getting real and uncomfortable. Libby’s infatuation with Frank’s Crimson Bolt caused her to become his kid sidekick Boltie who is way too much in love with the violent aspect of the job. Her first initiative was to go after a guy who she thinks maybe probably keyed her friend’s car. She broke a glass vase over his head which embedded shards of glass into his face and she almost smashed his head in with a large sculpture. When seeing a couple of Kevin Bacon’s thugs at a gas station, Frank gets chased down the street only to be saved by Boltie running Frank’s car into one of the thugs and Frank uses one thug’s gun to shoot the other thug. Both of them were left to most likely die while the crowd of onlookers around them actually cheer for the victory, before this point the news was reporting him as a violent pscyopath. The two heroes then go to the discount gun store to buy an arsenal of weapons to storm the drug lord’s palace and rescue Sarah once and for all. Boltie’s infatuation finally comes to a head when she comes into the living room and tries to seduce The Crimson Bolt while she is wearing her costume. Even though he shuns her advances, she forces herself on him in a very uncomfortable scene. Frank then goes to throw up and sees a vision of Sarah in the toilet which leads them to the final bloody confrontation at the mansion. And when I say bloody, I mean pipe bomb, limbs missing, smashing a guy’s head on a sharp tile bloody, as Frank essentially descends into madness, but succeeds in rescuing Sarah. Who leaves him again after a few months, but finds a great guy and starts a large family. But Frank’s ok with it because the guy is good for her and he’s still in the picture as their friend. And instead of helping people as The Crimson Bolt, you see that he spends his time helping people as Frank by doing little things like holding the door or saying “thank you”.

I’m not sure what to really say about this movie, I loved parts of it, I was shocked by parts of it, and parts of it were genuinely touching. I laughed out loud many times during this movie, like the line butting scene I mentioned earlier where he goes across the street to change into his costume in his parked car, where everyone can still clearly see him changing, comes back and smacks the guy in the head who starts profusely bleeding and writhing on the ground in agony, then also smacks the girl he was with for good measure, then runs off yelling “Don’t butt!” Rainn Wilson does a great job of making you really care about Frank even when he gets pushed off the deep end. He does what superheroes aren’t supposed to do aside from maybe the Punisher, but at the end of the movie, you still like him. And it bothered me a little bit that at the end of it all, there’s absolutely no consequences of his little killing spree.

The changes in pacing and tone throughout the movie might be a little jarring and there’s definitely a few places where the movie might shock you. There’s one spoilerific scene near the end of the movie. While I was watching it I guessed what had happened a few moments before the reveal, but it was still a pretty stunning moment. This movie is absolutely not for everyone, and it bears a lot of similarities to Kick-Ass, but in Kick-Ass things turn out more or less the way a Superhero comic should. In this movie, the results are more or less the same, but it just takes a different route to get there. So if you liked that movie it might be worth a watch. And my full thoughts on Kick-Ass will be up on Sunday. Until next time, this has been Bubbawheat for Flights, Tights, and Movie Nights.

← Should I watch Chronicle?
Kick-Ass →