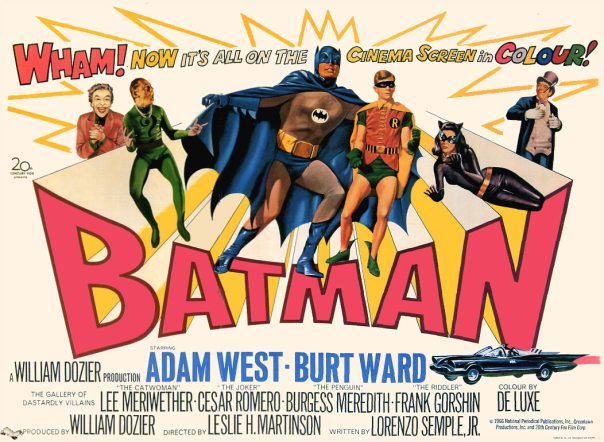 I had been considering watching this movie sometime this month because Jena has been very much into Batman more than any other superhero, and while I wanted to save the two Nolan Batman movies for just before the Dark Knight Rises, I figured I could watch the others early. It was Saturday evening and Jena was going on about Batman while we were trying to figure out something to watch, so I looked this movie up. The Batman TV show was a bit before my time, so I had never seen any of it aside from a few YouTube clips, but I was familiar with how campy it would be. It still managed to go above and beyond my expectations and it was hilariously fun to watch.

This movie is basically an extension of the television series, putting it on a grander scale, but keeping within the same setup as the TV show. There is a major team up of four of Batman’s biggest villains: The Joker, The Riddler, The Penguin, and Catwoman. As someone who hasn’t seen the television series, but is very familiar with almost every other TV and film version of Batman, I thought that The Riddler and The Joker were too similar to each other in this movie. They both had a goofy laugh and were pretty much based around the same concept, with the difference between them about the same as the difference between a joke and a riddle joke. Even the Penguin was pretty similar to the other two with the only difference being that he was involved with fish related jokes. Catwoman was the only one of the four who stood out, and it helped that Lee Meriwether was pretty hot in leather and heels. But she also had the whole alternate personality Kitka, who played around with Bruce Wayne.

Preening herself while the other villains laugh mindlessly.

The pace of this movie moves along extremely fast, managing to get in what felt like a dozen different evil plans to do away with Batman and Robin in the little over an hour and a half running time. The movie doesn’t waste any time in the library or on the Batcomputer trying to solve the Riddler’s riddles, or trying to come up with a plan of attack. Instead they come up with the answers to the riddles almost instantly, even though the answers are often bizarre. There’s also little chance of confusion during any part of the movie, since everything Bat related is very clearly labelled with large letters so you know exactly what it is for, including the secret bat pole to the Bat cave, even going so far as to label which pole is for Bruce, and which is for Dick. Even the villain’s lair has labels for Riddles, Jokes, and Penguin Food, too bad Catwoman didn’t get her own shelf. 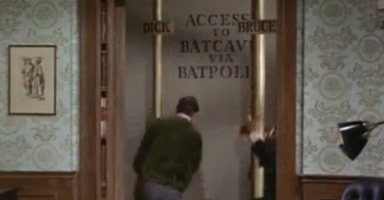 I suppose that's good, since if they activate the "Instant costume change lever" on the wrong poles, they'd be wearing the wrong costumes.

The absurdity of the villain’s schemes are what makes this movie so enjoyable. They are all so far removed from reality or even make any sort of sense at all that they end up being hilarious. It even starts off with a bang, using the Batcopter to lower Batman down on a ladder onto a yacht that disappears and instead he ends up with a giant rubber shark attached to his legs. They struggle for a while until Robin saves the day by bringing down the can of shark repellent, right next to the whale repellent and manta ray repellent. It immediately lets go and explodes as soon as it hits the water. The core of the evil plan involves a dehydrating ray that turns people into a little pile of dust which can then be returned to normal by adding a little water. And yet, the material is presented in a way that it is completely true and serious by all of the characters which makes it all the more funny. It’s not nearly as funny in the more recent parody movies where it feels like they’re winking to the cameras at how goofy it all is the whole time.

There are some fantastically cheesy and goofy scenes in this movie, like the famous “some days you just can’t get rid of a bomb” scene, with Batman running like a lunatic around the pier with a giant cartoonish bomb in his hands. And no matter which direction he goes, there is some cliched innocent like a baby in a carriage, nuns, or a group of ducklings. There’s also the ever famous scene of them climbing up the wall with a rope, made possible by filming them crouch walking in an incredibly gay looking pose. Scenes like this which of course inspired the SNL series of shorts The Ambiguously gay duo.

Why else would Robin be leading the way?

I can see why kids loved this show at the time, everything was fast paced, vibrant colors, and fun action scenes. Jena really enjoyed this movie, but at the same time even she realized it was “really goofy”. This movie didn’t turn down her love of Batman, who remained her favorite character, and her favorite villain was “Catgirl”, “because she’s the cutest cat”. I liked the fact that there was a hint of a serious plotline with the love interest between Batman/Bruce Wayne and Catwoman/Kitka, but it was pretty much treated like just another one of the ridiculous plotlines, only giving it a moment at the end with sentimental music playing while Batman looks off in the distance before using the Bat-cuffs on her. I had a total blast watching this movie, and if you go into it with the right mindset, it can be total fun. But if hearing everything they used get prefaced by the word “bat”, this movie is definitely not for you. Until next time, this has been Bubbawheat for Flights, Tights, and Movie Nights.