I’m finishing up this week of documentaries with Superhero Me, which I found by randomly searching “superhero” over at Hulu and this was the first movie that popped up. It’s an odd mix of comedy and interviews based around the recent real life superhero movement combined with the filmmaker, Steve Sale’s quest to become a real life superhero himself called SOS. The humor comes from the affable nature as well as the general absurdity of the whole process. There is a large amount of charm in this movie, and it was made completely on the cheap, with practically no budget, which is really the biggest downside to the movie.

This documentary is one part Steve Sale’s quest to become a superhero, and one part a look into the phenomenon of the real life superhero movement. He talks to comic book fans, costume designers, martial arts and personal trainers, as well as other established real life superheroes, both in person, and through video clips. It’s hard to get a feel for Steve’s personal opinion on the actual real life superhero movement. He comes off as genuine in his goal to become a superhero. He visibly gets into slightly better shape, seems to be serious with his martial arts training (especially compared to Batman’s moves in Confessions of a Superhero), but there are definitely moments that emphasize the silliness of the whole thing. Like when he gets a hilariously loud and slow gas powered scooter to patrol the streets, only to have it break down shortly afterwards. Or merely the plenty of scenes of infectious laughter at what seems to be the complete absurdity of the entire situation. The same goes with the scenes of the other real life superheroes. Many of them come off as quite silly and/or absure, such as one of the early superheroes who carries around a toilet seat, or many of the video clips that look like they were pulled off of YouTube. 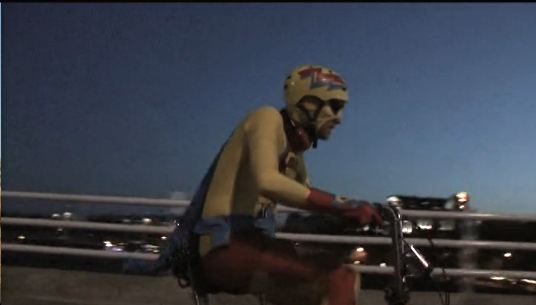 After losing the scooter, he moved (up? down?) to a bike.

This movie was shot using various means, from camcorders all the way to smartphone video, I think the video and audio quality is tough to get through at times. There are several scenes where the dialog is very difficult to hear, either because of low recording levels, or extra loud ambient noise that completely drowns out the voices. The video quality is much easier to overlook as it gives the documentary a real home grown flavor to it. I especially liked the one brief shot filmed by his wife on his return home from America, it’s the smallest, lowest quality, but it’s a great little personal scene. I also liked seeing the brief wedding footage between Steve and Charlotte, and I was glad that SOS did not make an appearance during that moment, even though he did postpone his honeymoon in order to visit the US and a famous real life superhero.

That superhero in Florida is named Master Legend, and he is an interesting character who takes up a good chunk of the film towards the end. He’s based out of Orlando, Florida and claims to have been a real life superhero over half his life, since he was 16 years old. He claims to have gone through a ton of fights, come out on top more often than not, broken more bones than Evel Knievel, and is more than willing to bust some heads if he needs to. But he looks like a goofball, and doesn’t physically appear to be very intimidating in the slightest. He does appear to do a lot of good in other ways, like when he meets an old fan who he helped get off of drugs, or when he talks about all the charitable things he does to help the homeless in Orlando. In the end, I got the impression that Master Legend really was doing some good things for his community, but I also thought that there was more than a little embellishing to his past, in the same way that Steve himself embellished his own “superhero origin story” when getting his first article in the local paper.

No really, there’s six of them. Go ahead, count them.

The music is by far the best part about this film, Steve himself is has a musical background and wrote the theme song for his hero SOS. I didn’t think the entire theme was all that memorable, but it made me smile every time I heard the “SOS” hook. There’s plenty of other great songs throughout the movie and there’s even a fun little segment where he talks to a superhero-themed band called “Justice Force 5”, even though there’s six members. I hate to say it, but I actually thought the Justice Force 5 was the weakest of the music used throughout the movie, though the segment was quite funny. The entire movie was an interesting look into the world of real life superheroes from someone who doesn’t take it nearly as seriously as half of the people who claim to be one. I enjoyed the movie quite a bit, I thought it respected what the real life superheroes were doing just enough, but at the same time took a little bite out of the way they’re doing it. Until next time, this has been Bubbawheat for Flights, Tights, and Movie Nights.