Welcome to another edition of Follow Friday where each week I feature and interview a fellow blogger and follow their suggestion to another blog to feature next week. I prefer this over a blogroll because it gives each blog their own time to shine, plus I personally rarely click on blogrolls so why would I expect you to? Not only that, but I get the chance to check out some great blogs I might not have found otherwise found, talk to some great people, and share the conversation with you. Of course, if you would rather see something like a blogroll, I have collected all of my previous Follow Friday sites in list form which you can find right at the top of the page. This week I was directed by Bonjour Tristesse to check out Castor over at Anomalous Material. 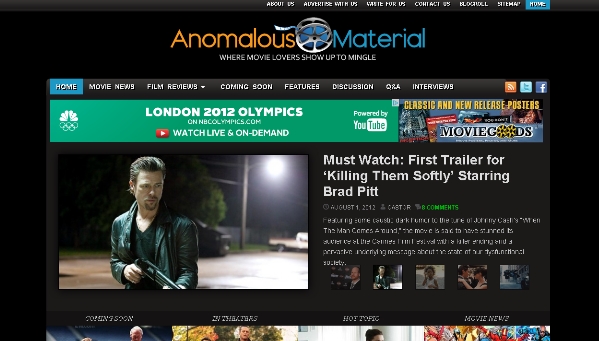 I’d say that this is probably the biggest, most popular site I’ve featured on here. If you’re visiting my site, it’s very likely that you’ve also been to Anomalous Material. It looks great, and has tons of news, reviews, and other fun stuff. I’d say more, but it’s been an extremely long day for me, so I’ll just give the floor to Castor already.

Bubbawheat: One of the reasons that Bonjour Tristesse led me to you to interview is because you are an established presence on many different blogs, and yet there’s not a whole lot known about yourself. So, can you take a moment to tell a little bit about yourself, your blog, and why you started blogging?

Castor: Thanks for having me. I’m Castor, the apparently “mysterious” founder and editor-in-chief of Anomalous Material. I always get a kick out of people wondering why I stay semi-anonymous (it’s not that difficult to find out who I am) but as Bruce Wayne tells it in Batman Begins: “As a man I’m flesh and blood I can be ignored I can be destroyed but as a symbol, as a symbol I can be incorruptible, I can be everlasting.” 😛

As for AM, I started the site about three years ago and my good friend Red Georges joined me after a few months. Everyone loves a good movie and we wanted to be able to create a forum where we could discuss the wonderful world of Film with all the folks out there. We have had many highlights over the months and years and recently passed one million visitors so it wasn’t a complete failure after all.

BW: I’ve heard from many other bloggers that you were the first, or one of the first comments they ever recieved on their sites. How do you find these new blogs, and about how many do you visit each week?

C: I have long made a point of fostering community not only over at AM but as part of the greater movie blogosphere. Not only does it help you grow your own blog but it also promotes a greater sense of community. To be honest, I’m not nearly as proactive these days (I work 60+ hours a week outside of AM) but if you comment regularly on my site, I will try my best to visit and/or comment on yours. It’s minimum courtesy in my view.

BW: What do you tend to look for in a new blog for it to catch your interest?

C: People who care. One of my long-standing pet-peeve is leaving multiple comments on blogs only to find the author nowhere in sight. A fast, clean and visually appealing website as well as a sense of humor are also big pluses.

BW: Your site has a category for interviews, though most are aggregated from other sources, have you or any of your writers done any original interviews for Anomalous Material?

C: Interviews haven’t been an area of focus over the years but we have interviewed a few people including bloggers and fledgling actors. Maybe someday, we will able to re-publish an interview we had with an actor from Terrence Malick’s To The Wonder (it had to be taken down).

BW: That’s too bad, especially if it’s because of some annoying legal issue that you’re not allowed to even talk about. What movie are you looking forward to the most?

C: I always looking forward to the next Terrence Malick movie so it would be To The Wonder. I was disappointed when Christian Bale dropped out but Rachel McAdams and Malick are a match made in heaven!

BW: And what is your favorite superhero movie?

C: Batman Begins. I still contend it’s the best of Nolan’s trilogy (let’s have a fight in the comments!).

BW: If someone mentions a Nolan movie, it’s usually the Dark Knight, but you’re not the only one that’s said Batman Begins. It’s a fine start to an amazing trilogy. And finally, what site do you suggest that I follow for next week?

C: You must go and say hi to my good friend and fellow Minnesotan, Ruth from FlixChatter.

I’ve seen her around in a few of the other blogs I visit and I think I’ve visited the site, but haven’t spent much time there yet. Good choice. And thanks for your time, it was great hearing from you. Until next time, this has been Bubbawheat for Flights, Tights, and Movie Nights.