It’s October, so you know what that means? Horror movies! And this year I am going to be no different, but before I get to some horror and thriller movies based on some graphic novels, I used my free month of Netflix to check out a superhero film that I didn’t have on my list and hadn’t seen around anywhere else. It’s a Thai movie from 2006 that could easily be considered a Thai variation of a Wuxia movie which I don’t cover here, but still draws enough inspiration from Western superhero movies that I thought I had to include it. It also follows pretty closely to the standard superhero origin story, though with a lot more martial arts fight sequences rather than superpower showcases. Also, while the film is mostly in Thai with subtitles, when the villains are speaking to each other, they tend to speak in heavily accented English for reasons I never quite understood. It was different enough to be a refreshing change of pace compared to most of the superhero movies I see, but in the end it still followed the same basic story arc. 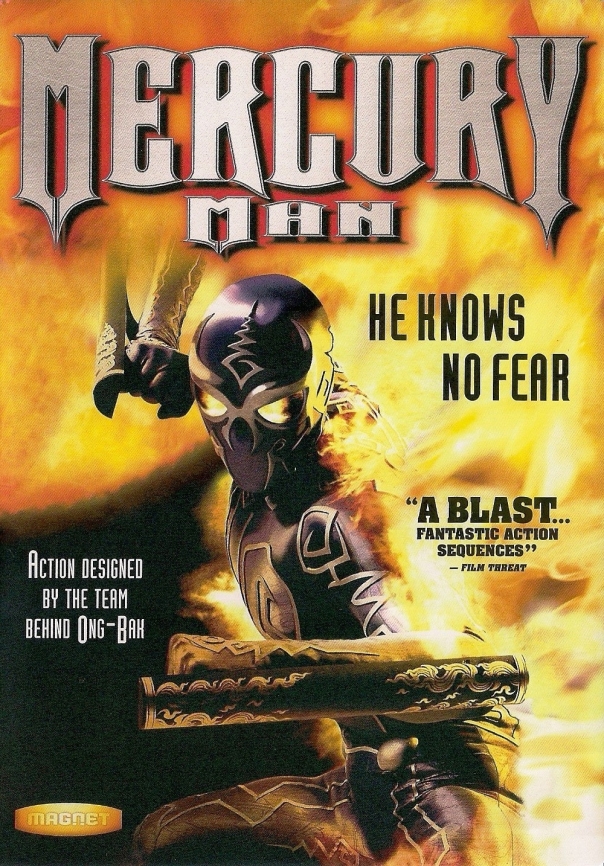 Chan is the hero of the story, he’s a firefighter with a hero mentality. Which means that he violates his orders, risking his life to save a baby from a burning building, albeit during a training simulation. When his team goes in to fight a prison fire during a breakout, he ends up getting stabbed with a sun amulet. Instead of killing him, the amulet gets absorbed into his bloodstream which gives him certain powers. His blood gains certain properties of metal which apparently includes the ability to heal himself, to raise his body temperature hot enough to burn his clothes, to harden the blood in his body to make himself invulnerable/bulletproof, to use magnetic fields to draw metal objects to him, or to draw himself to large metal objects. The last two tend to visually appear similar to when Spider-Man swings off of buildings, but instead of webbing there’s just a subtle image of electromagnetic waves. His costume is also very similar to Spider-Man’s black costume. It’s form-fitting with extra large glowing eyes, and instead of the webbing pattern there’s ancient symbols, and it’s made out of fireproof fabric.

The exposition about his powers is given in a variety of odd ways. There’s a dreamlike sequence where he is being talked to by an elderly monk who tells him how he must be able to control his mind in order to control his body. He also has a young woman who follows him around acting as his sidekick of sorts and she also happened to be guarding one of these amulets that was stolen at the beginning of the movie. And there’s also a weird CGI info-toon that talks about the mythology behind the amulets as there is a moon amulet which the villains have and the sun amulet which is inside of Chan’s bloodstream.-It’s a lot to take in, and while it’s as far fetched as any other superhero movie, it’s generally well explained within the context of the movie. 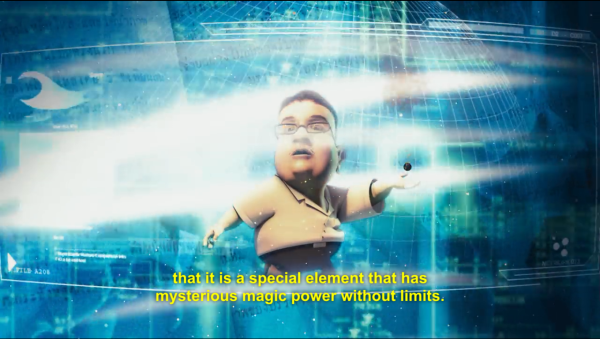 The villains are an odd bunch led by Osama bin Ali and is supported by a small group of what appear to be Americans, or at least caucasian. It may be due to my lack of understanding the area that this movie takes place in as well as its culture, but it was an odd dichotomy between what the villains appeared to be and what their goals were. The leader’s name obviously sounds similar to Osama bin Ladin, though he looks like he just got out of a K-Pop group with his long hair and eyeliner. His minions seem like they’re supposed to be American and they all generally speak English to each other, though none of them sound like English is their first language. And on top of everything else, their target is an American battleship, and they have a grudge against America for their work in supporting wars in their countries. It’s an odd statement to try and make within a movie of this type, and it also wouldn’t carry much weight as the ones supporting the idea are the villains of the movie. In the end, it just felt like it could have been any random target.

What this movie really should have going for it are the many different fight scenes. For the most part, they are all well choreographed, and it has the added sense of humor due to the fact that it felt like every single person in the film’s universe know martial arts. Chan knows it, his sister knows it. The only person who doesn’t seem to know martial arts is another firefighter on his squad, though he has enough brawling skills to take out someone who does know martial arts. I also found it rather curious that Chan’s sister ended up being a post-op transsexual. It’s curious because it was such a non-issue throughout most of the movie outside of one comment made by one of the villains that he was going to castrate her and she says that it had already been done, and I didn’t even make that connection until I read more information about the movie. There was also a nice touch at the end of the movie when there was finally someone else with some superpowers for Chan to fight against as Osama’s head lieutenant Arena ingests part of the missile that was initially headed for the American ship, though I was unclear if it was supposed to be part of the moon amulet, some other biological weapon, or something else entirely. There were often parts of the movie that were unclear, which is odd considering the amount of exposition. The movie tends to use the exposition to explain the wrong things; overexplaining what doesn’t even need a full explanation, and underexplaining things that would help understand what’s going on in the rest of the movie. 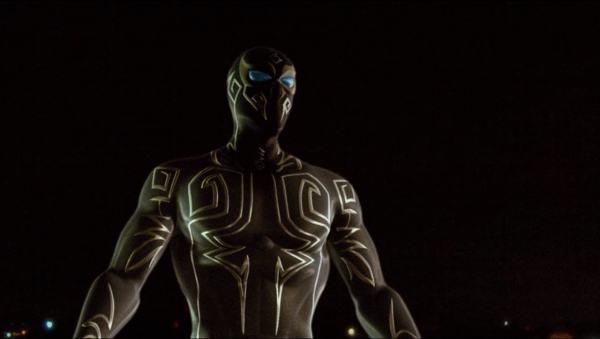 Despite many of this movie’s flaws, there is enough good here to recommend this movie. It has quite a few good fight scenes, it can almost be taken as an overly subtle parody towards superhero movies. Chan is never even called by any superhero name by the end of the movie. He’s always just referred to as the man in black with super powers, or something similar. The villain ends up taking Chan’s mother hostage to lure him into a final showdown, and she doesn’t make the connection between the superhero and her son. Overall, it was still pretty goofy and hard to take seriously. And yet it rarely seemed like it was being played for full on laughs. There was also several different plot threads going on, especially in the beginning where many different characters are introduced, but none of them seem connected to each other, and it’s impossible to tell who will end up playing which part in the movie. It’s all a bit of a mess really, but it’s a harmless mess that’s just trying to have some fun. Until next time, this has been Bubbawheat for Flights, Tights, and Movie Nights.