When I first made my superhero movie list, this one was absent from it. I had actually seen it before, back when it first came out even though I think I waited for home video. I always remembered it as more of a sci-fi movie than a superhero movie. But then I watched a great episode of How it Should Have Ended with Super Mario. “I’m just like you, I’m a superhero. I rescue the princess. You are Superman, I am Super Mario, we are the same.” And it won me over, and I was hoping for another “so bad it’s good” superhero movie because this one has bad written all over it. They took the overall concept of Super Mario, pulled out a handful of names, and a couple designs, then threw it into a generic connected dimension sci-fi movie. Instead of making the mushroom kingdom into a bright, colorful, whimsical place, they made it dark and dystopian. It had some pretty poor action, poor comedy, and a poor plot. There were a handful of fun moments, but not much in the movie clicked with me, and it also never quite transcended into over the top bad fun, it was just lazy.

One of the first things my daughter said to me when we started watching the movie was “Where’s his beard? Luigi doesn’t have any beard!” When a five year old picks up on something like that so early, it makes you wonder why the filmmakers decided it was a good idea to change the character like that. They are actually plumbers at least, with the odd choice of “Mario” for their last names. The only reason I can tell that they do this is because, and I’m guessing here, some studio exec realized that they were called the “Mario brothers” and thought that “Mario” had to refer to their last name. And then, one of the writers felt forced to include that bit of information into the script and decided the best place for it was a weak “who’s on first” gag. Somehow, they even managed to get the look of their iconic outfits wrong. Instead of having red/green shirts with blue overalls, they are wearing blue shirts with red/green overalls. When I was watching the movie and they got to that point, I knew they looked wrong but I couldn’t put my finger on what it was, until I looked at a picture of the real characters. The argument could be made that the movie wanted to put their own spin on the designs, but when they matched everything else so closely, but got that one simple thing wrong, it didn’t look unique, it looked wrong. It may have also tried to look like some of the older Mario designs where the colors were reversed, but even then, those blue pockets looked awful.

Yeah, that looks exactly what I would think a realistic version of Yoshi would look like…

I think what sums up the general dislike of this movie was really the fact that the attempt was made to tie the movie in to the video game, and yet it missed on almost every level. There really is a ton of references to the video games in this movie, but in every instance it’s just a little bit off center. They even used the name Princess Daisy instead of Princess Peach due to the fact that she falls in love with Luigi instead of Mario. But making Goombas into tiny-headed dinosaurs instead of walking mushrooms, making Yoshi into a baby T-Rex/Raptor, using NES accessories as props, having the good king be a sentient fungus that looks like shredded strips of rubber. The list goes on and on.

One of the few things I liked about this movie was Dennis Hopper as “president” Koopa. In this version, he’s basically a human, but he was descended from T-Rex. He seems to have gone all out in this role, even going so far as to often hold his hands in front of himself similar to a T-Rex, but still natural enough that you could easily miss it if you weren’t looking for it. I also fairly liked his right hand woman played by Fiona Shaw, probably known best as Mrs. Dursley. She fawned over Koopa, but at the same time had no qualms about scheming against him. Unfortunately, the rest of the cast were awful. Daisy was barely given anything interesting to do, I really disliked John Leguizamo as Luigi, and Bob Hoskins as Mario felt like he was just along for the ride. 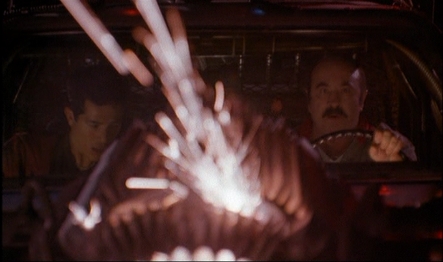 I guess those sparks were an important part of Super Mario bros. Obviously more than either Mario or Luigi.

The designs for the world of the movie were just as bad as everything else. It felt like it was somewhere between Mad Max and Hot Wheels. It was too shiny and toy-like to be cyberpunk, and too dirty and thrown together to be sleek sci-fi. All the vehicles were apparently supposed to run on a bumper cars-like electrical grid, which basically just meant that every car had to have a giant, distracting, spark-thrower on it somewhere, often more than one. The only thing at all that I liked about the design was that I thought the animatronic puppetry for Yoshi was actually quite impressive, even though it looked like it could have been stolen off of the Jurassic Park set. The concept around the Goombas just plain made no sense whatsoever. There’s a giant de-evolution machine, but it appears to only de-evolve their heads. And at the same time, it makes them much larger (which is obviously just to make due for the way the actors had to make it work with the false heads). It also really bugged me that when they used the de-evolution machine in reverse to make the two stupid cousins smarter, they ended up still being stupid, they just spoke using larger words.

This movie couldn’t hold the interest of my five year old, and it made my wife, who is a big fan of Mario, actually quite mad. The action was boring or laughable, the comedy wasn’t funny, the drama wasn’t dramatic, the designs were a dismal failure. I went into this movie knowing it was a bad one, but thought I’d have some fun with it anyway. But near the end, I was just waiting for it to be over. I’ve got a couple more bad movies from the rental store and then I have got to start watching some better stuff, maybe Hellboy. Until next time, this has been Bubbawheat for Flights, Tights, and Movie Nights.