← What ifs! What if you could pair up any two superheroes?
Will a Superhero Movie Ever Win an Oscar? →

Welcome to another edition of Superhero Shorts, where I take a look at a superhero themed short film and have a brief talk with the creator. This time I’m talking with Stephen Henning who created an original supervillain named Rage in a short using a lot of news footage and special effects. As usual, you can check out this UK based short film below, or you can visit the White Hat Films’s YouTube page, also note that while the video’s runtime is over 30 minutes, that includes over 14 minutes of outtakes after the short.


One thing I liked about this short was the focus on the news footage of the event. I thought it was a unique way to take a look at the superheroes with a similar-yet-still-different approach than the found footage style popular in horror movies and also used in Chronicle. I also thought the special effects were done pretty well for a low/no budget short. The moving towers were visually interesting, though honestly a little odd for an actual superpower. The nameless hero was also a little odd, having a wide array of super powers, and yet not really having any identity to connect to, not even having a name listed in the credits. The fights between the two heroes were pretty fun and while I had some complaints, overall I was fairly happy with this short. But enough from me, let’s hear what creator and nameless hero Stephen Henning has to say.

Bubbawheat: I liked the news footage aspect of the short. Given the recent popularity of found footage movies, was there ever a thought to make the short entirely news footage/found footage?

Stephen Henning: I had considered it, and a lot of my footage was geared up for that style. But I started shooting Rage in 2007, before Cloverfield, and after the latter’s success, I thought people might think I’d just gone for a copy-cat approach.

It’s important to say that Rage was created as a bit of fun. The budget is zero (apart from the cost of the drinks that I bought people to appear in it 🙂 )Virtually nobody in the film is an actor.

That said, I still wanted to do it as well as possible. So that leads to a problem of how to tell a proper story. People can run convincingly, but speaking dialogue convincingly is really difficult unless you have a talent for it.

So I used the news footage as my story narrator. The news presenter is a real news presenter, so I knew he’d add the right level of realism to it. And the Home Secretary was played by somebody who could actually act. (The UK’s Home Office is similar to the US Homeland Security and the Department of Justice.)

So with the storytelling in place, that left other people free to run, fight and get shot. 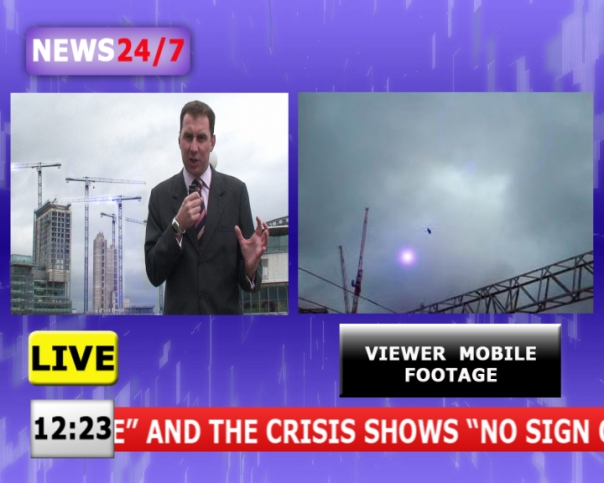 BW: In America, superheroes are often thought of as a typically American genre and I was admittedly a little surprised when I heard all the British accents. Do you have an opinion on the state of UK superheroes and/or superhero culture?

SH: In my opinion, the UK doesn’t (and probably couldn’t) do superheroes the way the US does. There’s something about the scale of the US, the anything-is-possible vibe, which somehow just lets you get past the implausibility of it all, and just go with it.

It’s interesting, though, how so many of the great superhero writers/artists/directors were born in Britain and went to the US to ply their trade (such as Mark Millar, Dave Gibbons, Alan Moore, Neil Gaiman, and Chris Nolan). Must be something in the British psyche that makes us aspire to write for superheroes.

I’d say that the best superhero thing in the UK at the moment is a TV series called Misfits. It goes for gritty realism and humour, which is something that I think us Brits do pretty well. When the characters get their powers, they don’t immediately think: ‘let’s fight crime’. The programme explores how they deal with their powers and the ludicrous – and rather horrible – situations they get themselves into.

It’s not for the faint-of-heart though. These aren’t people you’d necessarily want to have powers.

BW: In the short, there is a lot of talk about Rage, but there is little mention of the guy. In fact, at first I thought the guy was Rage. Why was the decision made to make him a sort of anonymous superhero, he doesn’t even have a name listed in the credits?

SH: The decision to make the superhero anonymous was to speed up the storytelling and to try and avoid some implausible and badly-acted dialogue 🙂

But I realised that in going for the “He just ‘is’” approach – leaving out the how and the why – actually makes him more plausible. There’s no time to consider those issues, the audience just has to go with it.

Funnily enough, I just read this month’s Empire magazine, where Christopher Nolan discusses the problem of applying the gritty realism he brought to Batman, to Superman. Not that I’m trying to compare my film-making with his (that would take a super-level of delusion), but I certainly got what he meant in overcoming the plausibility gaps. Can’t wait for Man of Steel/i> (complete with actors and dialogue!)

One reference point that I had for the anonymous hero, strangely enough, was Harold Lloyd. 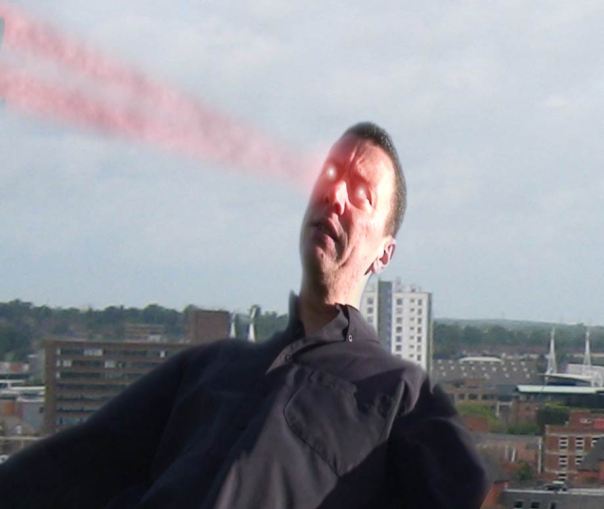 BW: You also have a series of superhero novels, could you tell us a little bit about them?

SH: The series is called Class Heroes. It is about teenage twins, James and Samantha Blake, who are caught up in a terrorist bombing in London. They survive, wake up in hospital, and discover that all of a sudden they can do some pretty amazing things.

The books are aimed at teenagers and adults, and the idea for the books grew out of the film. The questions that you’ve just asked me about, fed in to my thought processes:

Ever since I watched the original Superman movies and read comics, I always thought it would be interesting to tell a story about people with powers who just wanted to get on with their lives.

I asked myself: if I had developed weird abilities when I was a teenager, would I put on a costume and go out every night to fight crime? Where would I start? What would my parents say? How would I change as a person and would I even want to bother going to school anymore? And what else might I do with my powers? Can you imagine how many different, and possibly frightening, things that could happen.

Would you admit to your closest friends that you had powers? It’s a bit like winning the lottery. All of a sudden you are in a different league to those closest to you, and inevitably nothing would be the same again.

BW: I mentioned in my only superhero novel review that the superhero genre feels much more like a visual genre, is it hard to gain traction for a superhero novel, or does its uniqueness make things easier in the marketplace?

SH: I think it’s a bit like the difference between a James Bond book and a James Bond film. A book based on the high-octane action of the movies would be pretty dull. The books are more character-driven.

I chose teenage heroes because it is a difficult time in life that everyone has to go through. All your senses are heightened, decisions seem more important and you’re changing as a person. That’s where the drama is, and in the what-if? scenarios that I described earlier.

Having said that, there is quite a lot of action in book 1, A Class Apart. All thriller books and superhero stories need action and suspense, and I think the Class Heroes novels have that in good measure.

I’d just like to add that I haven’t forgotten my love of film-making. There’s an exciting opportunity now with eBooks to provide some interactive, visual content in a novel.

The Class Heroes series is accompanied by a (fictional) news website called 24/7 Interactive News. The style of this website/news channel is very much in the vein of British tabloid journalism. So imagine how the media would leap on the kind of events that happen in a superhero story.

The point of having these news stories is to add to the realism. People are so used to watching the news and, although we’re more cynical these days, we still believe a lot of what we see and read.

So as I said before, while I wanted to write fantastical stories, I wanted to ground them in reality as much as possible.

Take a look at this news report, relating to events leading up to book 2, What Happened in Witches Wood.

SH: Spider-Man, the Sam Raimi 2002 version. I know it has (arguably) been surpassed in terms of film-making vision for a superhero series, but when I first watched it in the cinema I hadn’t seen anything like it before. Spider-Man was always my favourite superhero, so it was a dream come true, and I don’t think it will be rivalled in terms of the impact that it had on me. I was blown away.

While I did enjoy Spider-Man 2 more, I totally agree that the experience of when you watch a movie for the first time can improve the quality of the movie in your memory. Thanks so much for taking the time to talk with me, and good luck with your book series. Until next time, this has been Bubbawheat for Flights, Tights, and Movie Nights.

← What ifs! What if you could pair up any two superheroes?
Will a Superhero Movie Ever Win an Oscar? →