After watching and reviewing Justice League: The New Frontier, I thought I had finished watching and reviewing all of the DC Animated movies that have been currently released. After writing this list, I realized I still have one to review (Public Enemies), but I have seen it before so whatever. I’ve always enjoyed watching these animated movies from Marvel, DC, and even some of the other non-affiliated animated movies like Bolt, the Incredibles, or Megamind. But even though these are all released direct-to-DVD and have never gotten a theatrical run since going way back to the Batman: The Animated series spin-off movie Mask of the Phantasm (which I sadly have yet to see, but also don’t include in this series of Warner Premier original DC Animated movies), they are all done with quality writing, are often based on acclaimed comic book runs, have excellent voice casts, and high quality-within-a-budget animation. And what better way to wrap up these movies, so to speak, than with a list of my favorites, which started as just a top 5 list and when I kept finding titles I just couldn’t exclude, grew into a top 10 list, which is a bit over half of the currently 17 released titles with 2-3 new ones coming out every year. So, without ado…

This isn’t the only anime anthology that I’ve seen before, but I have to say that I’ve loved every one that I have seen and this one is no exception. While not every short in this set is perfect, there are plenty that come close. It’s very interesting to see Batman translated into the anime style, not only that but to be translated in several different ways within the same collection. Several of my favorites were the shorts that focused more on the side characters rather than Batman himself, but everything in here is worth a watch. It’s a great experiment that I wish DC would try again in the near future, something that Emerald Knights tried, but it just wasn’t the same.

This was the first DC Animated movie that I watched completely sight unseen early in this site’s history. I originally thought it had something to do with the big event that I had heard of but never actually read – Crisis on Infinite Earths, but instead it’s only focused on a single parallel world where the Justice League are the bad guys and the Legion of Doom are the good guys led by a heroic Lex Luthor. I honestly don’t remember a whole lot about this movie anymore except it had James Woods with an amazing take on an alternate Batman called Owl Man.

This movie exists as proof that Wonder Woman can hold her own in a major motion picture, even though it’s not very high on this top ten list, it’s still in the cream of the crop when it comes to superhero movies in general. It focuses on her Greek Mythology roots and also helps make the invisible jet make a certain sort of sense. It also has Alfred Molina aka Doc Ock hamming it up a bit as Ares, god of war, and Captain Hammer himself Nathan Fillion as Steve Trevor. The laughs might come on too thick at times, but I enjoyed every bit of it.

7. Superman vs. the Elite

This is Superman’s only solo outing on this list, I’ve rarely found him that interesting except in those rare cases when he gets the chance to act out of the ordinary. Yes, I’m one of those people who agreed with the decision in Man of Steel to have Superman snap Zod’s neck. This movie heads along those same lines and appears to push Superman over the edge through this group of vigilante superheroes that take the law into their own hands and let that power go straight to their heads. But in this version, Superman is still in complete control and has a plan fully thought out, but before that plan is fully revealed, it’s pretty awesome to see an unhinged Superman and think about what it would be like if that sort of character existed in the DC Universe (even thought it probably does and I just don’t know about it).

This isn’t the first title in this list that I think deserves a different title, I would have called it Gotham City’s Jim Gordon: Year One which follows both the first year of Batman being Batman as well as Jim Gordon’s first year in the corrupt police force of Gotham City. It tends to follow Jim more often than Bruce, but they do have somewhat intersecting careers, while Gordon isn’t always on rock solid ground, especially considering his wife, his upcoming baby, and his the woman he “works with” in more ways than one. It tackles the small time criminals and shows the life of Jim Gordon and it all works. And of course who else plays the voice of Jim Gordon but Bryan Cranston, if that’s not a selling point, I don’t know what is.

Even though I’m not entirely fond of the title of this movie which should have been called Supergirl: Apokalips, I am quite fond of the actual movie itself. Like another movie on this list, this is a far superior origin story for Supergirl than the live action version. Even if it does fall into a couple of the typical good-girl-gone-bad stereotypes, all the characters are interesting, and the interactions between Kara and Clark are believable and well done. There are a couple nice little twists along the way, and a great climactic battle that’s only topped by one other movie on this list. 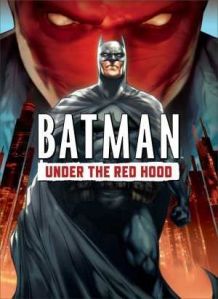 4. Batman: Under the Red Hood

Batman is heavily presented in this list partly because he’s heavily presented in the DC Animated films in general, headlining 4 of his own films and appearing in 6 more out of the currently 17 released movies. The other reason is that he is just such a great character in general. This takes an early dark turn when a more extreme vigilante comes into town wearing a red hood, working with the low level criminals and killing the high level ones. It has a great cast with Jensen Ackles from Supernatural as the Red Hood. There’s tons of great moments with Nightwight, the Joker, the Red Hood, and even Ra’s Al Ghul. Really love this movie.

This came out a couple years before the live action Green Lantern movie, and even though it covers a few of the same beats, this is the much superior origin story of Hal Jordan. Sinestro is the most iconic and the most interesting villain for Green Lantern to fight, and to see how his origin plays out here is fantastic. The voice acting is great, with Christopher Meloni handling Hal Jordan’s cocksure attitude with ease. The action takes place almost entirely in space, and that is really the right decision for this kind of hero. Not only that, but it even manages to raise the stakes higher and does it much more potently and poignantly than the live action during the scene where all the lantern rings fall from the sky. And where else do you get a climactic fight that ends with someone smashing two planets together? 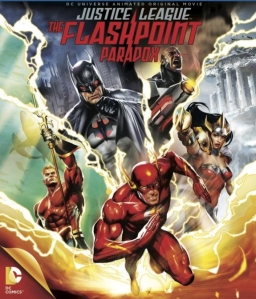 This is the most recent DC animated movie and it is also one of the best. I am always a fan of time travel and/or alternate timeline stories and it’s great to see the alternative future that the Flash finds himself in. In this world, it’s Thomas Wayne that survived the night in Crime Alley instead of Bruce and yet he still becomes Batman. Although a much darker and edgier Batman. Just like The Dark Knight Returns before it, the level of violence allowed to be shown is surprising for this kind of movie, but the darker tone absolutely works within the context of the story and the dystopian timeline on the brink of destruction. There are plenty of familiar faces turned on their heads, but Barry Allen and Thomas Wayne is really at the heart of it all and carries the movie in the best way possible through to end on a very touching note.

At least at this point, it’s generally thought of as The Dark Knight Returns, Parts 1 & 2 although there is a blu-ray release in the near future where you can watch both halves edited into a single movie. I had never experienced the original graphic novel story before watching this, but I was very aware of how highly regarded it is as being one of the best Batman stories out there and I totally agree. It’s great to see an older Bruce Wayne, retired for a lot more than 8 years (and not because of the death of his not-quite-girlfriend) The designs of all the characters, both old and new are quite interesting, and the second part is packed full with action that I’ve never seen before, from the violent end to the Joker, to the knock down, drag out fight between Batman & Superman. Ever since watching it, it’s jumped to the top of my list and has even made a spot in my overall top ten, even though I’m not entirely sure where it fits in just yet. If you haven’t seen it yet, be sure to go check it out sometime soon.

Did I miss any of your favorites? I know I’ve heard a lot of people that enjoyed New Frontier, but it just wasn’t my style. How would you order them, is there any that you haven’t checked out yet? Let me know in the comments. Until next time, this has been Bubbawheat for Flights, Tights, and Movie Nights.