It’s rare that either a superhero movie or a comic book movie would be the most well remembered for a line of poetry commemorating a holiday that’s not even celebrated in the US. And even though fans of this movie still probably don’t know exactly what it means to celebrate Guy Fawkes day, they still know the opening lines of that poem and likely no more of it other than vague references to Guy Fawkes and blowing up Parliament. There certainly isn’t mention of lines further down in the poem “A rope, a rope, to hang the Pope, A penn’orth of cheese to choke him, A pint of beer to wash it down, And a jolly good fire to burn him.” Although the pope is never hung nor burned, there is a priest who is killed. It’s been a long time since I’ve seen this movie, but it’s always stuck with me as being one of my favorites. This was the first work from the Wachowskis after the Matrix trilogy though they only wrote the movie and directed the climactic fight sequence. Even without their direction, it has a lot of visual style to it, so much so that I considered forgoing a written review altogether and just share a collection of the dozen or so screenshots that I took while watching the movie over the past couple nights. 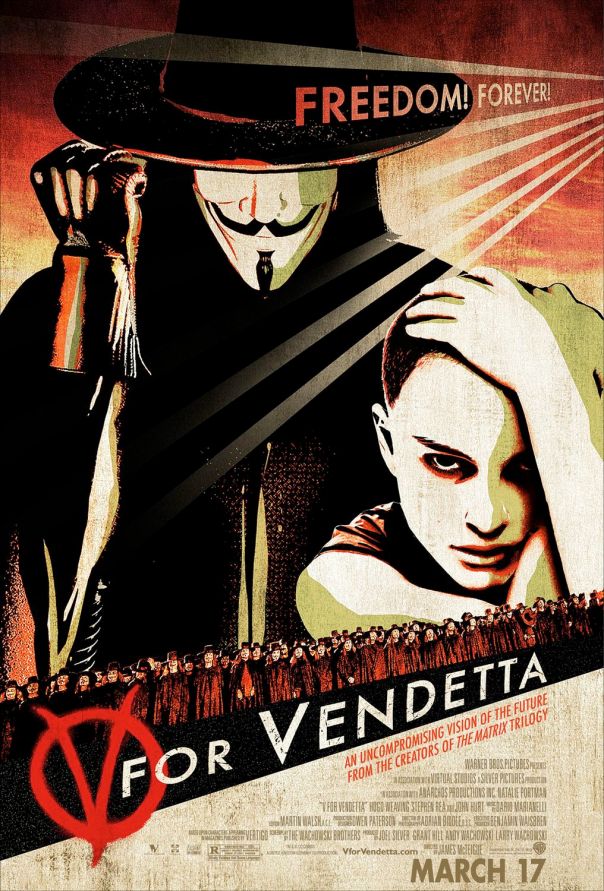 Deep down, the heart of this movie really is a revenge story, and to a lesser extent a superhero origin story. Or at least a super antihero. V himself is a superhero of sorts, he has his own origin story where he gains his super powers & his motivation. He even wears a costume to hide his secret identity. But there’s so much more to this movie than that, it has a timeless quality to it that is relatable to so many different situations. Watching later scenes in this movie where the oppressed citizens stand up against the militarized government shares more than a few shades with the recent protests in Ferguson. And of course when there’s a charismatic leader who comes to be in complete control of a fascistic government there’s always shades of Hitler that can be seen. This is especially true when V himself comes from essentially a concentration camp where the undesirables are held and experimented upon. Where the movie is concerned, the undesirables aren’t specifically because of their race or religion, but instead their political views and sexual orientation. Although the specific reasons as to why V ended up at Larkhill were never fully explained as he never shows any homosexual tendencies in the film and actually has romantic feelings towards Natalie Portman’s Evey.

V himself is most definitely an antihero, the greater goal of freeing the country from the tyrannical rule of John Hurt’s Chancellor Sutler is really just a beneficial side effect of his revenge. There’s even a nice bit of foreshadowing when he first brings Evey to his subterranean lair and shows her the Count of Monte Cristo where she points out that within that movie he cares more about revenge than he does for the woman who loves him. There is also several times where he does absolutely despicable things during the course of the movie. Even though it can be argued that they were for the greater good, it is still pretty horrible when he physically and mentally tortures Evey over the course of weeks if not longer. Not to mention how he sets it up so that innocents will get murdered by the government police force, whether it’s to allow him to escape, or whether it’s a very likely possibility as a precursor to revolution. But what’s great about it is how the character is made to be likable through the writing of the character, the eloquent voice of Hugo Weaving, the nuanced physical performance of both Hugo Weaving and James Purefoy, and even the amount of emotion wrought from a mask with a single baked in expression through light and shadow. He is able to emit a pureness of cause, something that he believes in so much that it justifies his actions as steps towards his ultimate goal which he believes will make everything else right in the end.

The visuals throughout the movie are another stand out example of the film’s excellence. Whether it’s something as simple as showing a blowhard television personality reaching into his seemingly endless cabinet of prescription and possibly non-prescription drugs, or the Big Brother-esque Chancellor Sutler on a television screen larger than life as he visually bites the heads off of his subordinates during his chastising, or the countless uses of the letter V shown subtly and not-so-subtly on giant clocks or in a streak of blood on the wall. Even something as simple and heartbreaking as the death of a young girl standing up for her rights is shown in a hauntingly beautiful fashion. There’s also the symbolism of the ending, which is likely lost on some people as it is really the only instance throughout the movie where something is taken as being symbolic more than being a piece of reality. As the fifth of November has come and V succeeds in his mission of blowing up Parliament with the help of Evey the crowd of citizens take off their masks where we see many familiar faces. We see the faces of those shown watching the television programs broadcast at various points in the film, we see the face of one of the Chancellor’s subordinates, but we also see the faces of characters that we know to be dead, or at least assume to be dead. There is of course the more literal theory that we never do actually see these characters die. We see Evey’s boss Gordon Deitrich who was captured, but V merely told her that he had been executed, we see Valerie and her girlfriend, but once again we are relying on V’s account, and we see the little girl who was gunned down, but that was also just a visualization of detective Fitch said would likely happen. But the more likely theory goes right along with the words coming out of Evey’s mouth, that V was her father, her mother, herself, he embodied the spirit of everyone and in that way everyone was V. Not only V, but everyone who embodied that same revolutionary spirit of freedom.

One aspect of the film that is often overlooked is the subplot featuring detective Fitch’s investigation of what actually happened to V and how it connects to his revenge plot. The investigation initially begins as a way to find and capture V, but as the facts are revealed, they end up changing Fitch’s entire perspective. Next to Evey, Fitch actually has the strongest character arc in the movie. He starts off as a pawn in this corrupt government system, but as he gains knowledge of how the government actually came to be and what it really stands for he becomes more and more disenfranchised and rebellious. And ultimately he comes around to allow V’s final plan to be carried out. In fact, one could say that he has a stronger arc than Evey herself. Even though Evey seemingly starts off as an innocent civilian, it’s revealed that she has a past heavily tied to the revolutionary spirit. Essentially every person who she looked up to was already a revolutionary whether she knew it or not, from her parents, her boss, and even the stories she read about Valerie when she thought she was imprisoned by the government. She always had the spark of revolution within her, she’s even the first person to speak the poem in the opening moments of the film, and it’s through V that the spirit that was within her the entire time is brought to the surface. If it’s not clear already, this has been an absolute joy to watch and write about. There is so much depth to this movie that could be plumbed, but I believe I have said enough for tonight. Until next time, this has been Bubbawheat for Flights, Tights, and Movie Nights.