I’m continuing my journey through the four feature length Dick Tracy films of the mid ’40’s with the second installment. Most of the cast of heroes return, and even a minor actor from the last movie returns in a different role to die yet again in this film. Compared to the last one, this has a lot more fun with the concept with several more very over the top characters along with a slightly deeper cat and mouse mystery aspect with some of the major players. I enjoyed it quite a bit more than the first Dick Tracy film, and once again it can be found to watch on Hulu. 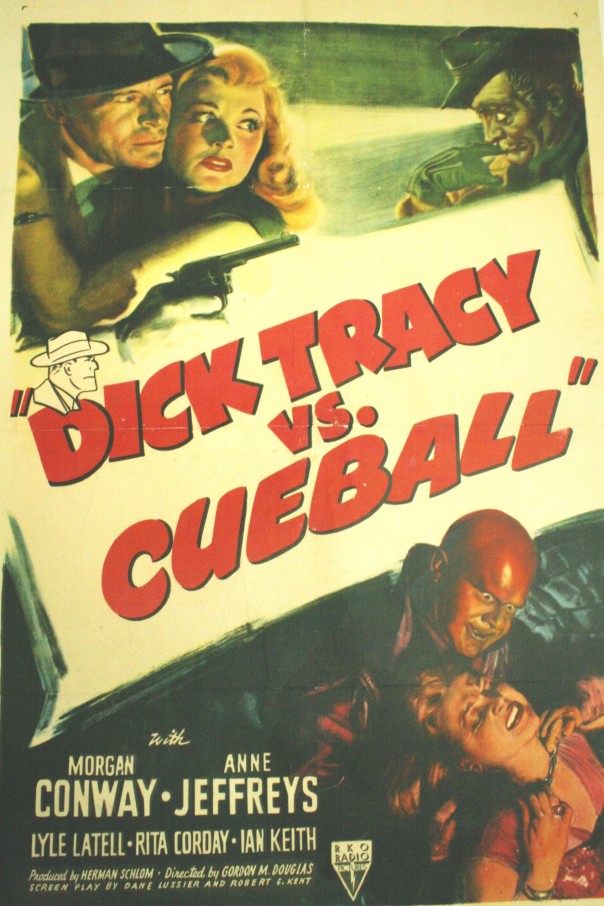 With a title like Dick Tracy vs Cueball, it doesn’t waste any time getting to the villain of the piece. And even though he doesn’t even appear to be wearing any type of prosthetic makeup, Cueball comes off as a bit more cartoonish of a character than Splitface did. His notable feature is pretty much just his very round face topped off with a very bald head, which he easily disguises through much of the film by simply wearing a hat. This also comes into play as his weapon of choice is the braided leather hatband which he uses to strangle his victims. It’s also notable that he initially doesn’t just kill out of villainy or just to steal the diamonds, he kills mainly because the man he was stealing the diamonds from pulled a gun on him first in a very laughable attempt at self defense.

The real fun in this film comes from the many colorful side characters on both sides of the law. First off is one of Dick and Tess’s friends who goes by the name Vitamin. He is a very flamboyant, elderly man who first helps the case by visiting an antique shop suspected of being in on the stolen diamonds. He is an absolute riot as he has the clerk go from piece to piece where he claims to be an expert on everything he touches. There’s also a moment where Tess also decides to get in on the case by posing as a member of high society and Vitamin goes through the motions showing to Dick that Tess knows how to be high society by playing off of Dick’s secretary Pat Patton. The other great character is Filthy Flora, owner of the Dripping Dagger and the one to go to if you need anything in town including a place to hide out. The way that she plays off of both Cueball and Dick Tracy is so perfect. And to wrap things up is Tracy’s partner-but-not-partner Pat Patton. He plays an interesting role here as Dick Tracy always refers to him as his secretary, but he pretty much acts as his partner the entire time. Yet, he’s obviously not a member of the police force as he gets arrested more than once by a “new recruit” who hasn’t met him yet, although the one that appears on screen has apparently heard of him. He’s generally the butt of most of the jokes as he gets knocked out more than once, always by Cueball, and crashes the police car.

While the tone of the film feels very campy by today’s standards with the many comic relief characters, it also has a very noir tone in some of the mystery and the stark shadows. Honestly, it generally works quite well, and the few action scenes work more often than not while the mystery ends up being fairly complicated and interesting to watch unravel. It’s also great to again see several strong female characters in this film, aside from Filthy Flora there’s again Tess Trueheart who puts herself at risk as bait in the final trap. But there’s also the diamond dealer’s secretary Mona Clyde who ends up stepping up to become the real mastermind of the entire scheme once a couple of the other players have been killed. She has a great double role as she puts on the innocent facade in front of everyone else, but lets that all drop towards the very end when she is dealing with Cueball for the diamonds. And through the whole film, Dick Tracy is able to show off his actual detective skills as he follows the clues throughout. All in all, it was a fun ride and well worth an hour of my time. Until next time, this has been Bubbawheat for Flights, Tights, and Movie Nights.