And here we’ve come to the final film in the Dick Tracy theatrical run in the mid ’40s which came out in the very same year as the previous film Dick Tracy’s Dilemma which was released in July where this one was released in September. This means it’s also still relevant to the 1947 Blogathon which is still going on through today at least. It again has Ralph Byrd in the role of Dick Tracy but brings in Boris Karloff to play the heavy named Gruesome. This film also brings back quite a bit of the humor and quirkiness present in the first two films to end on a high note. And, like the last three it is currently available to watch via Hulu. It’s well worth the still quite short sixty-odd minute runtime. 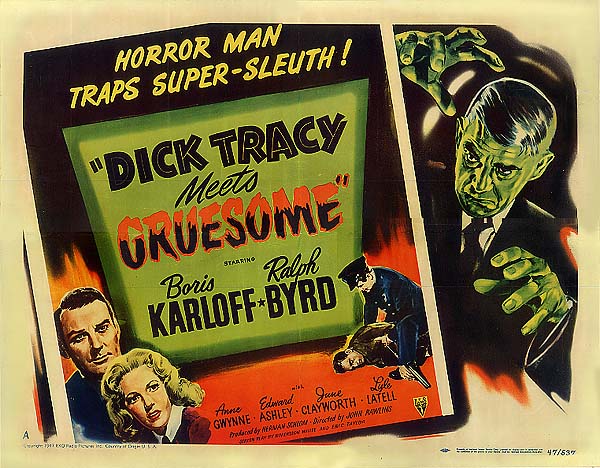 The biggest thing that was missing in the previous installment came back in force here, even though it wasn’t always in the best fashion. There were plenty of sight gags, like the doctor’s office with names like “A. Tomic” and his assistant “I. M. Learned”. There’s also the very comic book-ish plan of the villains who have gotten a hold of this concoction that will freeze a person in a death-like state for a certain period of time. This leads to several moments of visual gags with people frozen in place, whether it’s Gruesome himself when he accidentally inhales the gas early in the film, the people in the bank when the criminals are using it to rob the place, or in the end when it accidentally goes off to end on a real life freeze frame. There’s even a great little meta gag when Pat Patton mentions that Gruesome looked an awful lot like Boris Karloff. The only thing that could have made this one better would be the return of Vitamin who was nowhere to be seen.

Once again, there are a couple important women in this film. Tess plays a great role as she escapes the freeze gas at the bank by entering the phone booth and has to pretend to be frozen at a couple key moments to keep from being caught by the crooks. There’s also A. Tomic’s assistant Irma Learned who helps cover for the doctor, though she does end up getting killed. Another new character that brings in a bit of fun was the newspaper reporter who keeps showing up digging for a scoop, and Tracy keeps putting him off so as to not tip off Gruesome and his gang. It’s a pleasant little distraction that helped keep things interesting in between the investigation moments and the moments with the Gruesome gang.

For his part, Karloff plays a great heavy. Compared to all of the other films, Gruesome is the most capable villain. He outsmarts Tracy and Pat Patton on more than one occasion and isn’t beholden to anyone else like some of the other villains were. Like the other films, there are other players involved, but Gruesome is ultimately the one in charge. Not only that, but he’s also the one who causes the least harm to others. The only person that he directly kills is Irma Learned who was an accessory to their outfit and would have led Tracy right to them, and later one of the other members of their group who was in the process of betraying him. I do also want to mention the overall arc of Pat Patton himself as a character, as he’s the only major character who appears in all four films played by the same actor. He starts out being specifically called Tracy’s “secretary” and gets arrested after goofing up by a new recruit who doesn’t know he’s in with Tracy. He starts to get some more agency in the last film as he’s the one who finds one of the accomplices and shoots the Hook, and here there’s a brief mention that he joined the force, which means that he is apparently a full fledged officer now and Tracy’s partner rather than just his secretary. It’s been very fascinating to watch this unfold even as a fairly minor character who literally gets knocked out in every single film at least once. If you do decide to give these a chance, I highly recommend seeing them all in order, or at the very least, watch Cueball and this one which were my two favorites. Until next time, this has been Bubbawheat for Flights, Tights, and Movie Nights. 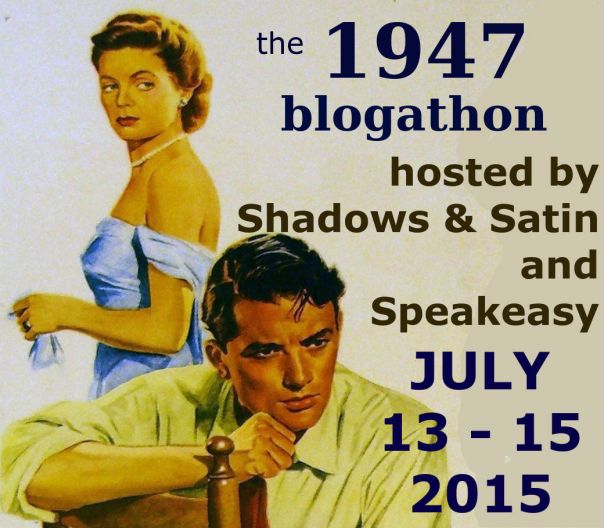