June has come to an end and as I try to squeeze my foot in the door I don’t quite make it so this last June-ing the Cult post is showing up on the doorsteps of July. This has been a fun month of movies that range from odd to awful to just plain bizarre, but they have all been a treat to watch. Wrapping up this month is the second film from Japan and is easily the most bizarre of them all, almost moreso since it comes from acclaimed and prolific director Takashi Miike. Zebraman starts out as a look into the life of a sad teacher who tries to live out this superhero fantasy based on a cheesy show that he watched as a kid until it eventually turns into something much more bizarre involving super powers and alien invaders. It was a nice way to wrap things up even though I doubt I’ll get around to the vastly different sequel any time soon. But before we get too far into the film, let’s hear from Elwood Jones who chose this film for me to watch.

Hi I’m Elwood Jones and my blog “From The Depths of DVD Hell” along with its tie in podcast the “MBDS Showcase” I use to generally further my lifelong obsession with cult, foreign and obscure cinema as I prefer to look at films mainly off the well-worn path of mainstream cinema.
The superhero film I have chosen for you though is “Zebraman” from director Takashi Miike who while perhaps best known for his ultra-violent Yakuza movies or insane output as he usually puts out about five films a year with this film being one of his first stabs at the superhero genre which at the same time unquestionably retains all of his usual randomness as seen through the various screwball antics he peppers throughout the film despite the largely serious tone. If anything though this is one of the more gentle introductions to a true maverick of Asian
cinema.

To start things off, we get a look into the sad life of a teaching supervisor Shin’ichi Ichikawa. His students don’t care for him when he substitute teaches one of the classes, his young son ignores him and gets bullied in school, his teenage daughter doesn’t respect him and is dating an older man who turns out to be a serial killer, and his wife doesn’t care for him and is cheating on him. Though honestly the wife is mostly a non-issue since she’s barely seen during the entire run time. In fact, even when she is first introduced, we only see her hand through the doorway as she undermines her husbands authority and allows their daughter to go out late at night, even gives her cash for a cab. So it completely makes sense that he would create this elaborate-but-still-amateurish Zebraman costume for him to essentially play pretend in his bedroom.

Where things start to get a little weird is when it’s revealed that there is an alien invasion involving a group of green, blobby, body-snatching creatures with big round heads and a visible neuron in the middle of their heads. There are a small number of characters besides Ichikawa who revolve around these creatures in some way. There’s these two officers who work for the Defense Department, which seems to be something similar to the FBI’s X-Files. Unfortunately there isn’t any Scully, just a nerdy Mulder and the other one is more of a regular Joe who regularly complains about his itchy crotch. There’s also the school’s principal who is eventually revealed to be another one of the aliens, though he was the one who went rogue and caused them to crash on Earth in the first place. It’s also odd how they keep returning to a joke where he appears to inadvertently crap his pants even if it’s eventually revealed that it’s actually his alien essence leaving his body because he’s dying. Possibly. And to round things up, there’s a new transfer student Asano who’s in a wheelchair and has a single mother. Not only that, but he’s also a fan of Zebraman and in the early days of the internet is able to show his teacher a Zebraman fan page which was how he became a fan. And during the early part of the film, the two characters form a bond over their shared love of this character.

But the aliens aren’t actually the weirdest part of the film. As more is revealed, Ichikawa decides that he wants to show his new friend Asano his Zebraman costume and goes all the way across town only to unintentionally run across the serial killer wearing the crab hat that his daughter is dating. And while he initially acts like a typical person when faced with a dangerous man, he inexplicably discovers that he has almost superhuman fighting abilities and Zebra punches the guy so hard that it leaves a giant hole in his face that fills with the green alien goo. As the film goes on, his powers grow and at one point his hair stands on end for a split second in a zebra mohawk when he senses the aliens nearby. He even gains the ability to fly, and in the final battle his costume changes from his simple homemade one to a sleeker movie worthy costume. 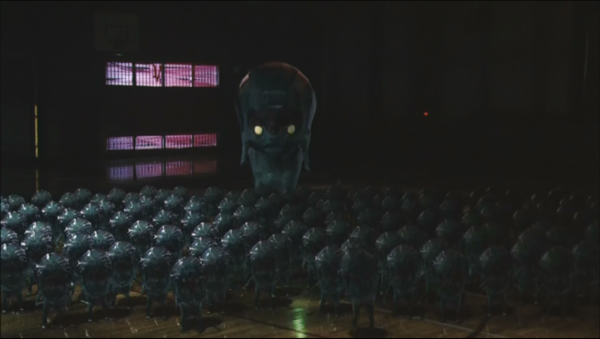 What makes this a little problematic over the course of the film is how it has trouble separating fantasy from reality. For most of the film, as absurd as things get, it’s all presented as reality. But there is one moment shortly after he has bonded with Asano and his mother over a nice dinner and is attacked by a giant crab with a human face. The crab man literally cuts his arm off when Zebraman calls for Zebra Nurse who is Asano’s mother dressed in a similar Zebra outfit. And while this specific section is revealed to be a dream, just having that dream sequence calls nearly everything else into question as to whether it’s fantasy or reality. But while that does mar the overall tone of the movie, it was still held up by the mix of humor and action. It was also nice that even though we were told that the wife was cheating on Ichikawa, he never becomes more than a respectful friend to Asano’s mother. It’s also simply amazing to watch as things play out over the course of the film as it gets more and more outlandish. It starts out as this simple family drama and slowly evolves into Ichikawa becoming the real Zebraman who can fly and turn into a literal zebra Pegasus with lasers shooting out of his head to destroy the giant alien creature and save the city from having a neutron bomb explosion attempt to destroy the same aliens. It’s something that simply has to be seen to be believed, and now at least I can say that I’ve seen it. Until next time, this has been Bubbawheat for Flights, Tights, and Movie Nights.